It's a work in progress but I wanted to improve our terrain options for our 40K games. 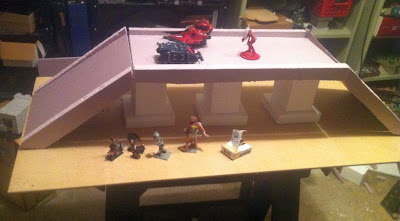 For a variety of reasons we settled on a bridge. It gives us some height, some LOS blockage, and it's an excuse to build some river terrain to go with it. Right now it's held together with toothpicks as we work through our paint scheme ideas but once we solidify those we will forge ahead.

That's a 2'x4' board. I wanted to make it longer but we typically play on a 6'x4' table. Keeping it to 4' at the longest let's us use it either "horizontally" or "vertically", rather than forcing us to let it stretch all the way across the battlefield. There's enough space between the pillars to let a Rhino pass through, so right now we're debating whether to make the under-bridge terrain more river or more street. I think it makes more sense if there's a river, even a dried-up river, but a street or just flat terrain is more practical as then I don't have to account for the river on the adjacent boards. Either way it should be interesting. 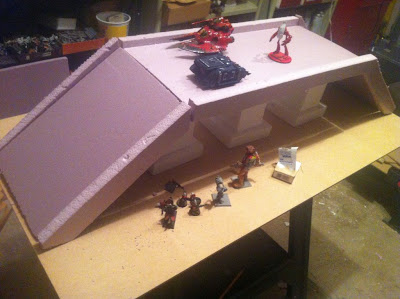 It also got the apprentices thinking about other terrain options, so there are coke-can power stations and exotic forests of styrofoam and toothpicks being worked on as well. Pretty much anything that can fit with our generic green woods & ruins battlefield and make it more interesting.

My original idea was to build some arctic ice-field type boards but it's been years since i've bit any significant terrain and though a more general shotgun approach might be better to start with, and then once we are back in that groove we can get more ambitious. Something like this example is along the lines of what I'm thinking.