The Random Nearby Vehicle Generator


Along a similar line of thinking as last week's Random Female Bystander Generator I give you another occasionally useful gap-filler: The Random Nearby Vehicle Generator! Sure, it's not quite as much fun as hitting on helpless NPC's but it can add a little color to your fight the next time the brick wants to throw a car at someone. Dress up those otherwise dull descriptions of everyone's favorite improvised weapon with the tables below: 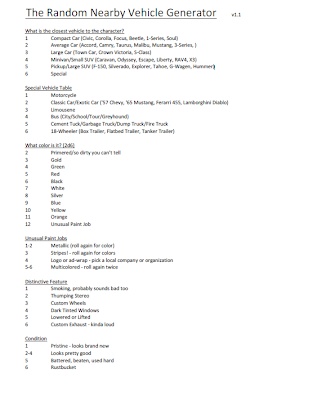 This set of options should pretty much cover everything else. Motorcycles are typically less than half a ton, Limos are generally two tons plus, a bus weighs 10-20 tons, a cement truck weighs 10-35 tons, the traditional garbage truck weighs 20-30 tons,  dump trucks are 10-40 tons, fire trucks are 15-30, the cab of an 18-wheeler weighs 10-15 tons and can haul up to 40 tons.

Should cover it, edit to taste. Based on some of the more recent reports as to the most popular colors of new cars.

Use as necessary to embellish. You might not find a thumping stereo on a cement truck, but then again you might.

It may not happen a lot but your players will remember for a long time the day they ran into a rustbucket Ferrari.


Think of this as an opportunity to throw a little bystander roleplaying into a combat encounter because every one of them has a driver somewhere. Maybe the exotic car driver is an associate of the millionaire secret ID of one of the players. Maybe the hapless dependent NPC of a character just happens to be sitting there in their car. Maybe the female cement truck driver starts arguing with the brick about just what he is up to. Maybe the worried classic car driver asks one of the PC's to move his baby to safety. Is the bus full of senior citizens on a tour or are they really Viper agents in disguise waiting to unload a full broadside on the unsuspecting heroes - those "hunteds" or enemy complications can be a real pain sometimes.

Or in extremis, the wronged motorist is driven to lash out as a themed villian with a grudge (moreso if they have a fatefully punny name).

Very cool tables, although one might need to modify prevalence of certain vehicle types according to locale: rural North Carolina would have more pickups than compacts, etc.