K is for Kaptain Amerika

I'm going to violate one of my self-made rules for the blog and repeat a previous post. I do this for two reasons: first, I really like this character, and second, none of the other options for "K" really lit my fire. This is one of my favorite old CoH characters and I like the write-up I gave him, so rather than straining to make a mediocre concept interesting I'm going to reprint him for this round of the A to Z challenge.

Roger Stevens was an undersized youth who wanted to join the military during the Worldwide Patriotic War of the 1950's. Rejected for his poor physical condition, he kept trying and was eventually accepted into an experimental program designed to create the finest soldier possible. The treatment worked, but only on him, and its creator and the facility used was destroyed soon afterward in an attack on the lab. Despite this attack, experiments in human enhancement would continue and some would succeed, but none as spectacularly as the Kaptain.

The Kaptain spent time training in many forms of unarmed combat, firearms of allies and enemies, languagesm tactics, and strategy. He was also equipped with a special and unique uniform and equipped with a shield made of a unique metal, symbolic of his role as "shield of the people", a protector, not an avenger. Within months he was in action both at home and abroad and the People's Republic of Amerika soon had its first true super war hero. 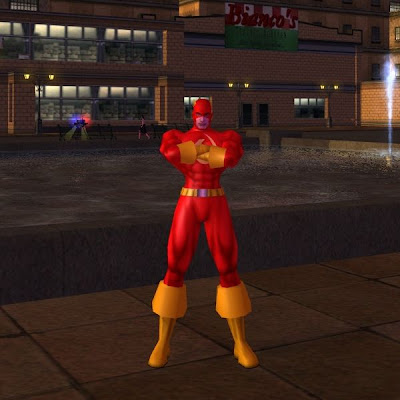 For fifty years Kap was the symbol of the best part of Amerika. The expeirment that created him also retarded his aging process, so that the passing of five decades touched him as though a mere 5 years had passed. Always forthright, always humble, duty pressed him onward. Even as his wartime comrades passed away he stayed true to the Republic and its citizens. Even as new heroes and new leaders sprang up with different values and priorities, he kept to his core beliefs. As the century drew to a close he felt somewhat isolated from the leadership of the Republic, their open greed and corruption grating against his sense of right and wrong and his sense of duty to the people. He kept going though, knowing that this was his place in the world.

Then one day news came theat a terrorist organization had acquired a nuclear weapon and was planning to detonate it somewhere in Manhattan. The gravest of threats demand the greatest of heroes and soon Kap was on the case. He pursued and destroyed most of the cell members. Bursting into the underground laboratory of the cell leader, he realized that something strange was in the works here - after all of his years of duty he knew what a nuclear device looked like and this machine was no bomb. As the leader leapt onto the platform, one arm still hanging useless, broken from an earlier hit from Kap's shield, he turned back, grimaced in triumph, pulled a lever, and things...changed.

Kap staggered, feeling a ... shift ... unlike anything he had ever felt before. His enemy yelled at him that it was a different world now, and though they were shielded from the change there was no place for him in it. In reponse Kap bashed the leader with his shield, knocking him out. Feeling a growing sense of unease Kaptain Stevens rushed back outside and into a world much like the one he knew, but clearly not his home.Within a few minutes he realized the People's Republic was no more - he was lost, a man without a country, a hero without a cause. 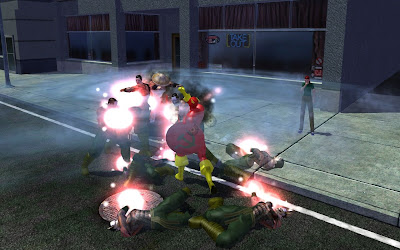 On the edge of despair Kap acquired civillian clothing and set about learning where he was. He had some hopes of finding a way back home but as time went on he realized he couldn't be sure his home even existed  anymore. As he learned more about this new place, indecision, melancholy, and a feeling of helplessness began to take hold of him for the first time in half a century. The language was largely the same, so he could blend in. The technology was quite similar so he was able to function within this strange society. It was not home, however, and he was unable to pull himself out of a spiral of depression.

Headed downward, he drifted to the edges of the city. He saw cruelty and violence here, much as he had seen it at home. One day though, as he saw a young mother and child under assault by some thugs, something stirred within him and he took action, much as he would have if he had seen these things at home. He kept at it over the next few days, thrashing a varierty of hoodlums and criminals and finally wiping out a local gang in a one-man war on crime. He realized that despite the drastic differences between his home and this "America" bad things still happened, he still had the means to do something, and the people still needed a champion. Donning his characteristic red uniform and bearing his iconic shield, the last survivor of the Republic took to the streets - Kaptain Amerika, Hero and Protector of the People, would not abandon his duty!

Notes: Kap is extremely concerned for innocent bystanders who might be caught up or injured  but is far less particular about the means used to deal with criminals or enemies - due process was more of a goal than a rule in Amerika. He has also been afected by the passage of fifty years of super-duty, not having been frozen in an iceberg for decades so he is not strictly a child of the fifties afresh. Powers
"The Shield of the Republic" - a unique weapon made of an indestructable lightweight alloy that both protects its bearer and can be thrown with stunning accuracy to strike at range
- Reflection- 8 (Amazing) Using the shield defensively
- Blast - 6 (Remarkable) Thrown Shield
- Fast Attack - 6 (Remarkable) up to 3 attacks per panel with either fists (All-Out Attack!) or a thrown shield (Ricochet!) 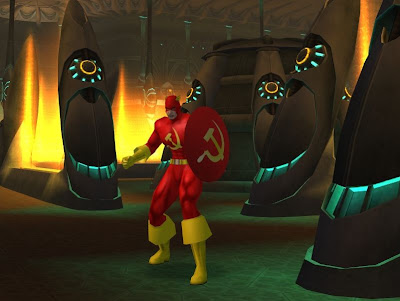 Qualities
"Patriot" - Even though his national affiliation is a little blurry and the world situation unfamiliar, he is still a believer in the land where he was (sort of) raised. If there is a threat to THIS America, he has resolved to treat it as if it was a threat to THAT Amerika. This is more of a strategic, conceptual thing - a cause.

"Defender of the People" - Kap will go out of his way, risk his life, and even sacrifice his life to protect the innocent. This is more of a tactical thing, influencing his decisions in combat RIGHT NOW.

Challenges
"The Last Amerikan" - Kap was born and raised in a world where different choices were made in the 20th century. Culturally he gets a lot of what makes "America" but it is different from the "Amerika" where he grew up. This causes misunderstandings sometimes, especially with references to the past, history, and politics. It also means his standards and expectations are somewhat off from what is traditional.

"Flexible Ethics" - In contrast to the image of a similarly named hero, Kap is a lot less Lone Ranger, and a lot more Jack Bauer. He is far more interested in what is effective when it comes to saving lives and thwarting criminals than he is concerned with rules and policies and codes of honor. this can get him into trouble with other authorities, his own authorities, and can create revenge-driven enemies.

"Bullheaded" - After doing what he does for over 5 decades, Kap is pretty confident in the decisions he makes and it can be very difficult to dissuade him from a course of action once he has chosen it.

"Sucker for a Pretty Face" - One of the best ways to try and dissuade Kap from a given course of action is through an attractive female. He has had very few long-term female attachments, considering himself on permanent wartime duty.

Kap comes out to 62 Points which is fairly high. He's a pretty combat-centric character but his intellect and awareness give him a chance to contribute outside of that and his Challenges and Qualities should make life interesting too. I think the Fast Attack power is a little gamey, but the Cap we all know is rarely shown hitting only one guy - in some panels he's punching one guy, shield bashing another, and kicking a third, and I wanted to capture that. Tell the DM to bring some minions.

To drop him down a bit you could take away the Fast Attack power and drop his Willpower to 6. That lowers his cost to 55 which in my mind is an "experienced" character but keeps most of the "character" of Kap. If that's still too high then drop his Blast and he can rely on his Reflection to hurt people at range - his cost drops to 49 and his Determination goes to 2. This would be a younger Kap with less experience - maybe he's the replacement for the original. 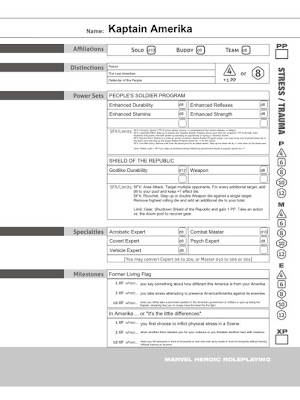 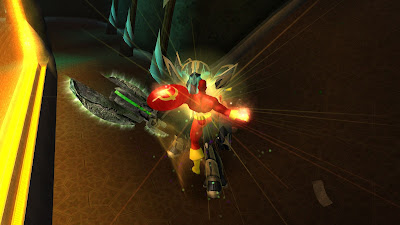 Here is another interpretation of Kap, mainly based on the published Cap sheet.
The milestones are the area where I think more experimentation is needed. Both of these could be more refined, at least in the 10XP option. Also, there are others that fit pretty well. I really like a possible version of the "Old Friends, Old Enemies" milestone used by Spider Man (Deadly Foes), and several others. Both of Cable's milestones could be adapted as well, I believe. 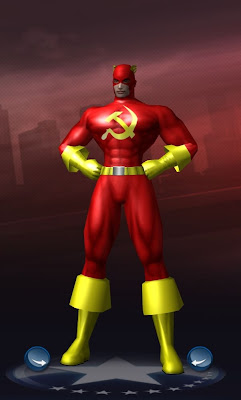 Anyway there are two versions of Kaptain Amerika. One of the fun parts of this kind of game is mixing and matching elements of different "known" characters and turning concepts inside out. Kap's a pretty good example of how that works for me.

Next up: The end of the week with the Letter L!
Posted by Blacksteel at 12:00 PM

Well, it's because Kaptain Amerika is so kool.

Where are you getting the MHR character sheets?

Robb - it's a form-fillable PDF. I think it's available on the MWP site as a download. Fill it out, print to PDF, and you're good to go.

@Blacksteel and Robb - Yep, that's what I use. I printed it, scanned it back into my computer as a jpeg so I could customize it and then reprint it for the kiddies.