So, what's new with D&D? Not much! It's been about a month since the latest playtest package - which is seeing almost zero action at our house in favor of "real" games. The lack of interest in it made me realize that this is the first holiday season in a long time where there is not a current version of D&D for sale - think about it ... we're done with 4th edition releases but there's not a new edition on the shelves yet nor do we have a release date for the next version.

In 2007 4E had been announced at Gen Con but there was still some 3E stuff out as late as October and there was at least an announced release date.

Prior to that there was a pretty solid run from 2000-2006 with 3E stuff. Even the 1995-1999 tail end of 2E had interesting stuff like the player's option books, Alternity, the 98 Greyhawk revival, the core rules CDROM, and the Dragon Archive. I think you have to go back to 1988 for a similar gap though  I'm not sure as the Dragon insert was in the Feb 1989 issue, so we may have still been unaware in the holiday season of '88. Prior to that new stuff was pretty consistent going back to the 70's and at that point you're getting into "before me" time.

So it's a little weird this year. I suppose I can still pick up some 4E stuff for the Apprentices - we are still playing it after all - but I'm not going to go nuts with it. 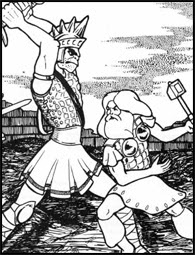 So it's kind of thin right now for RPG gift type stuff as far as things we play or might play soon. Maybe the 4E Essentials Rules Compendium and the Savage Worlds book, the Pathfinder core or Deathwatch if I find a deal or run out of other ideas. Fortunately 40K and the Xbox are always good for this kind of thing. 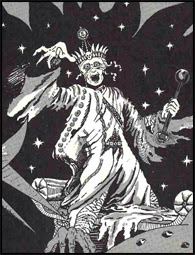 Other stuff:
Posted by Blacksteel at 12:00 PM

I'll be buying the 2E re-releases as well as the Slavelords and S-Series hardcovers, and the Unearthed Arcana re-release.

Yes, I already have all of them. So why buy them again?

Simple: to support the effort of re-releasing older editions. To help add my voice to the throng that is telling WotC this is worthwhile. Indeed, it was worthwhile enough that the Slavelords hardcover will have a BRAND SPANKING NEW A0 ADVENTURE IN IT. Official support for older editions? It may seem token, but it's something.

I can understand that. I would like to see support beyond just reprints of old rulebooks and maybe this is a start. I will point out that we got L3 in the 1999 anniversary boxed set in a somewhat similar situation and then nothing else came of it. Hopefully this does not go that way, different regime and all.

For true long-term support of past editions I think PDF's (or some electronic book format) are the way to go. This would allow them to make all of the existing material available, add new material, make some $$$, and keep it all "in print" at a minimal cost. I don't know what it's going to take to get there, but I would really like to see it.

S-Series you say? Hardcover you say? Hmmm...methinks Barking Alien may have to eat crow and purchase this from those wretched Warlocks of The Cost.

Wait, THIS gets your attention? I am curious about it now.