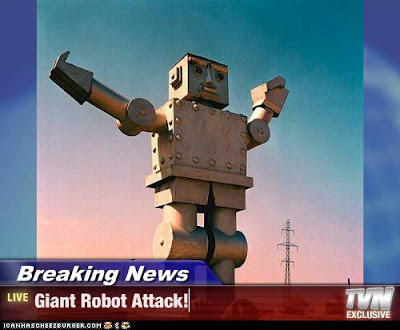 Freedom City, circa 2000 AD: all is peaceful, then a siren goes off as a trio of giant robots lumbers into the city, stepping on cars, smashing buildings, and sending panicked mobs of citizens screaming in all directions!

Where is the Freedom League?

What, they're out of town?

Who will save the citizens of Freedom City?

I've named this part of the campaign FC2K "A#" because this is a the first session I've run with the intention of continuing it as a campaign and it will mainly be the Apprentices most of the time. I have a second group (more on that tomorrow) with some of my main players and that will be the "B" branch though if we can work in some crossovers I will do so.

This was mainly an experiment to check out using Hero Lab and its tactical console to run a session and see if I could tear myself away from our tried and true index card system for d20 games. The rest of the boys were busy so I recruited Apprentice Who to help me out and he picked a Gadgeteer and a Batlesuit as his characters. He immediately started giving them names and a backstory - more than I was actually looking for this time, but I wasn't going to discourage him.

Being young and equipped with superpowers, his first instinct was to blast the robots. This proved to be ineffective and resulted in the robots throwing cars at his heroes. So, in a burst of creativity I rarely see in veteran gamers he decided to fly over (jetpack you know) and land on the robot's head, searching for a way to disable it with his technical skills.

Within a round or two he had a panel open and had pulled the plug  - success! Are we done yet? Oh no!

Meanwhile Mr. Krats had discovered the joys of "power attack" used against a colossal target and was blasting away at one of the megabots and dodging thrown mailboxes and newspaper machines like a pro.

At the same time Callisto was not satisfied with simply shutting down one of the bots - he spent the next few rounds reprogramming the thing to be his friend. So as Krats finishes off the second bot, Callisto and the first bot stomp over and start blasting and throwing cars at the third bot. The battle ends with a crushing blow from the friendly bot smashing down the third bot as the two heroes blast away. Then they turn and walk away with their new friend as the city begins its return to normalcy.

Who sent the bots? What was their mission? What secrets can be learned from examining the reprogrammed bot? We will have to wait until the next session to find out!

DM Notes: This wasn't really intended to kick off a campaign - it was just supposed to be a dry run with the game and Hero Lab to give me some hands-on experience with it. Apprentice Who got very fired up about it though and was talking about it for the next three days, and pretty soon the other Apprentices were asking me if they could play in (Who's) game! So I started looking at my stuff and figuring out a few options and decided to just use Freedom City for anything I run in M&M 2E to give me the maximum amount of material usage. Other games will likely end up in my homebrew Atomic City but this stuff all fits nicely together in Freedom so why not go with it?

Next session will probably happen this coming weekend. I suspect the heroes will be investigating the mystery of the giant robots, and you never know where that might lead.
Posted by Blacksteel at 4:29 PM

Nothing says love between a man and his son like attacking him with a trio of giant robots.

That's a hallmark moment that is.