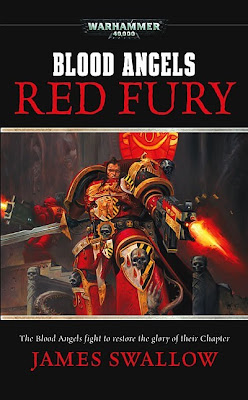 Quick Note: this is the third Blood Angels novel (review of book 1 here and book 2 here). Now I try to find something worthwhile about the things I discuss on the blog and I really did not like the first Blood Angels novel, but reading the second one redeemed it in a big way - they should have just been one longer book. So with 1 & 2 averaging out to a reasonably decent story what do we get with #3?

Red Fury is a new arc, so while reading the first two will give you more understanding of what has happened, it's no more necessary then reading all previous issues of a comic book to understand the start of a new arc - helpful, but not required. It's also a much stronger story, with a nicely done beginning, middle and end, ensuring that THIS one is complete in one volume. It continues with many of the same characters from the previous arc and sets up the next book nicely but is a complete story on its own.

The book begins soon after the events of the previous novels and largely concerns itself with the aftermath of those events. The chapter is in a tough spot and is trying to work out a solution. One development is that a conclave of all of the BA Successor Chapters is called on the BA homeworld, giving us a look at a variety of other chapters as well. In particular the Flesh Tearers are major players in the novel so if you have an attachment to them then this is a book worth reading. There is less unity between chapters than you might expect and with the Tearers representing the more barbaric aspects of the primarch and the Angels representing the more refined and cultured aspects, there are some strong differences between those two in particular.

The beginning of the book deals with these issues and then new complications arise which stir things up and then even more complications arise which lead to some nasty combat in and around the chapter's home base. Another fairly major character in the 40K universe shows up as well (I'm trying not to spoil things here) as a part of this and the whole thing is just a ripping good story about space marines doing their things with a solid mix of rivalry, violence, and reverence for the emperor.

By the end, the current crisis has been handled, but the need for both revenge and the prevention of a further crisis will drive the story in the next book.

The bad: The main character, Rafen,  is still remarkably generic.I get that it can be tricky to make "battle brother Johnny" a unique individual in the game but when you've spent 3 books inside the guys head he should come across  as more of a memorable personality than he does. It's not as much of a downer here because there is so much going on. He is the vehicle by which the reader experiences a series of interesting people and events (and they are interesting) and no more. One comparison: the Space Wolf Novels focus on Ragnar, who will someday become Ragnar Balckmane, a unique character in the Space Wold army. No one is going to be clamoring for a "Rafen" entry in the Blood Angels codex anytime soon. Now that can be good, giving a more "average Joe" point of view, and we get a little of that here, but there's really nothing else to the character beyond that.

Who must read this: If you're a Blood Angel player or fan, even if you hate gaming fiction in general, or the the first and second books in particular, this is the one you ought to read. Lots of time with Dante, Mephiston , and the other movers and shakers of the chapter, some exposure to the successor chapters and their chapter masters, and the whole thing takes place on Baal - it's 280-odd pages of immersion in the whole Blood Angel thing and it is definitely worth your time.
Posted by Blacksteel at 12:00 PM