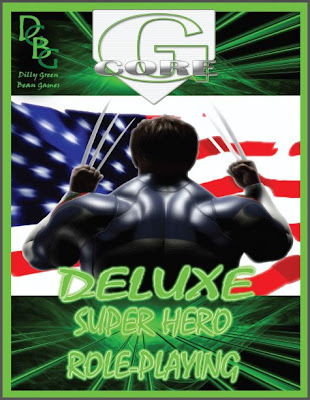 I've been slowly consuming various Supers RPG systems over the last year and I kept running across this one on RPGNow. I poked around the internet a little bit and couldn't really find much about it that wasn't posted by the author. Finally, with the publication of G-Core deluxe at the still-bargain price of $3.50 I decided to give it a look.

First off, in anything I have seen for and about this game the author's enthusiasm for this game is loud and clear and that's one of the reasons I wanted to look at it. This comes across as someone's labor of love and I want to give credit for that up front, because I'm going to say some things that aren't all that complimentary about it for a lot of this post and I want to be clear that I get this part of it.

The thing that hit me right in the face as soon as I opened the file is the look of the thing. See that green border in the cover shot up there? There's a brighter shade of that in a thicker page border on every one of the document's 69 pages, including the blank character sheets at the end. That's a whole lot of highlighter green, probably more than I personally need. Also, the art is a combination of photoshopped movie stills and very shiny/creepy looking 3-D models. I don't usually care that much about the art in an RPG rule book but it's not good, and I've seen a lot of poorly-illustrated books over the last 30-something years. If I care enough to mention it, that should tell you something.

Organizationally there's an intro, an explanation of roleplaying, and then it jumps right into character creation with two pages of point allocation and a running example of building a character that is a little arcane when I don't know how the system works. Why would I put 10 points into this and 40 points into that when I don't know what it means? After this we jump right into Types, Origins,  Flaws, etc and then finally on page 15 we get to the mechanics and how this stuff all works.

Starting on page 15 we get 6 pages of mechanics, including what the stats are, what they mean, and how to make tests using them. This is where we find out that it's a mechanical variation of Marvel Super Heroes. Unfortunately, it's a version where the nifty color chart is replaced by math. The color chart in MSH was a big innovation and made task resolution a breeze compared to most other RPG's at the time. Other good mechanics have come and gone since then, some of which I like better for most of my game time, but that chart and the ease of White-Green-Yellow-Red for variable results and column shifts for difficulty adjustment is just remarkably easy to use, intuitive even. If you're going to replace it, then what you do should really make the game better in some way - make it play faster, give it more granularity, something - the change in G-Core does not do this in my opinion. Also, the rules continually state "X+Y+d10" when what they mean is "X+Y+(d10x10) to get a roll from 10-100.

Abilities are rated on a 0-100 scale, and a typical task roll would be Ability + skill bonus (if any) + d100 roll (as noted above) vs. a difficulty ranging from 25 to 150 similar to d20 system difficulty classes. That works alright as a fusion of MSH and D20 mechanics, replicating the various colors from the chart (e.g. "you need a yellow Strength FEAT here to stop the bus before it goes over the side of the bridge) but it loses the easy adjustability of the column shifts as difficulty modifiers. If the speed and weight of the bus means that you need a yellow normally, then the column shifts would account for the fact that it's raining or you have one hand throttling a dinosaur or you're wearing high heels. It goes away with this mechanical system and nothing replaces it.

After this we get 20+ pages of powers. I think that's plenty to get started.

There is a Popularity system that is very much like the MSH Karma system.

Every table in the book is set up exactly like the tables in the MSH books - things like what each rank of an ability means along with a descriptive term - the one where Aunt May's Strength is "Feeble" and Hulk's is "Unearthly". It looks a lot like that without the neat little illustrations, the character names, and different descriptive terms. It's pretty familiar if you've read through the MSH books recently.

There are 5 pages of "Generics" or archetypal statblocks - this is a good thing and something I consider essential in a supers game if I'm supposed to run it. It's pretty solid too, covering everything from basic crooks to robots to giant octopi. It's a strong feature.

So where does this game fit in?


So to wrap up: I don't think it's a bad game, I just don't see a good place for it with original MSH/4C filling the "nostalgia slot" and ICONS filling the "modern update of a classic" slot, and BASH filling in the "alternative lightweight system" slot (and with the non-ultimate version of that at $1.99). If G-Core was free I would probably have a somewhat different take on it as an interesting variation - once you decide to start charging money for it though, I feel like I should take a harder look. I admire the enthusiasm behind it, but that's not always enough. As I've mentioned in some other recent posts, what does G-Core do better than any of those other games? I don't have a good answer.
Posted by Blacksteel at 9:32 PM