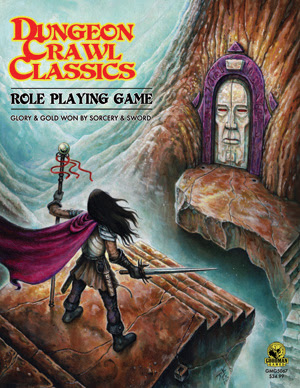 This one is getting a lot of attention in old school circles (and even on EN World) and I have not mentioned it here so I thought it was time.

I am a huge fan of Goodman Games - I used more of their modules during 3rd Edition than any other publisher's. I have 20-something of them still on the shelf. They were right up there with  Necromancer in my view. So I have had nothing but good experiences with previous products.

I downloaded the beta for DCC and played around wit hit a little but I never ran it, nor am I all that excited about the new final version - let me explain why:


Despite the dislikes expressed above this game falls into the category (and many games do at this point) for me of "I'd give it a try if someone else was running it, but I'll never run it myself". As is often the case I suspect that with a good DM and some good players it would be worth overlooking the mechanical dislikes to have some fun with a good group, but it would not be my first choice.

For me (and for other people too) the biggest limitation on our gaming isn't money or lack of good games, it's time - time to actually play something from the big pile of games that we already have. Old games have an advantage in that we typically already know the rules and have a pile of material to work with and these two factors make it easy to focus on actually jumping into a game. Examples here include Basic D&D and Hero System (for those of us who stuck with it for a long time). Newer games have some advantages in that they are typically designed to be easier to learn and play (less fiddily mechanics) and are also often designed to a goal of getting more done in a session and less to a goal of realistic simulation. Examples here include Savage Worlds and even D&D 4th Edition. So the less complicated rules system and the smoother play make up for the lack of familiarity. A game like DCC falls into neither category - it's like an old school game but enough of the mechanics are different that my familiarity means nothing (unlike say, Labyrinth Lord). It's also a new game but it's not really built like one, so the mechanical aspects skip newer design features like unified mechanics in favor of discrete subsystems that may add flavor but also and complexity and page-flipping.

While not specific to DCC I admit, I have developed a strong preference for games that place an emphasis on making it easier for the DM to run a game as that's really the core of what we do - to play the game, someone has to run a game. Systems that cater to that make me happy. Savage Worlds does that by keeping combat action-packed yet largely free of record keeping. D&D 4E does that with no-lookup monster statblocks, solid math, and a level-tag on everything to make on-the-fly eyeball-judging easy . Icons does that by taking a broader approach to superpowers and advantages and disadvantages and relying more on judging than detailed mechanics. M&M does it by providing tons of plots, archetypes, and the power level system to keep it all indexed for on-the-fly-eyeball judging.

Specific to DCC I have also developed a preference for games where payers have interesting choices to make right from the start and I don't see it as much here. Most of the characters from my D&D campaigns over the last 12 years could not be recreated in DCC. No Dwarf clerics, no Elf rangers, no Halfling wizards, no 1st level human Paladins, no Drow Vampires (sorry that's very much a 4th edition thing - ignore that) and that tells me my players aren't terribly interested in the heavily restricted character options available here. They certainly aren't interested in spending more time at the lowest levels of a D&D type game. They aren't going to go buy more special dice just for this game. So I won't be running it.

Then there's the final question - I have 5 or 6 or 7 versions of D&D around the house. I have Fantasy Hero, GURPS, and Warhammer. I have Rolemaster. I have Reign. I have MERP. I have Pendragon. I have old and new Runequest. I have Savage Worlds. What does this game do better than those games? Why should I spend money to acquire it and time to read and digest it and plan a campaign for it? How is it going to push any of them out of the starting line up and take their roster spot? I just don't see enough there to incite me to make that jump, and I see a lot of reasons not to. I'm not telling anyone not to go play it - this is strictly my take on things - but going back to what I said above I have a fixed amount of time available to play RPG's. My players generally do favor Fantasy over all others, but they need a reason to switch, and as the DM I need a reason to push for a switch. As it stands now DCC doesn't give me enough of a reason to do that. Don't feel bad DCC - Pathfinder didn't give me enough either, and I like those guys too, so you're in good company.
Posted by Blacksteel at 12:00 PM