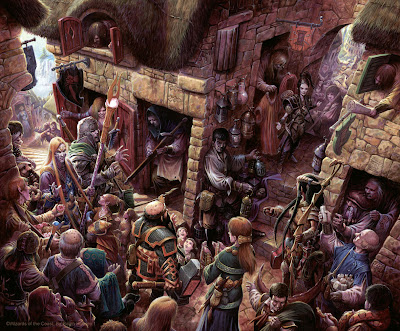 Our story begins in Fallcrest, the Nentir Vale, Impiltur, Faerun, in Greengrass of the year 1480 D.R. (the year of Deep Water Drifting).

The party begins scattered about the city, but all are drawn to the riverside where a crowd has gathered. With heavy snows for the last month, food is growing scarce and the Lord Warden of Fallcrest is announcing a new program to collect and ration food in the city. Naturally this is met with some resistance amongst both rich and poor. A clan of river-trading halflings landed the day before and news has spread that the unnatural cold is affecting all the lands they travel, spurring the controversial decision from the city's lord. As freezing winds blow ever more snow into the town the fierce debate continues.

Lieutenant Gravis, a genasi refugee from Thay in service to House Reinhardt, is assisting the city watch in maintaining order, mainly though a connection with a dwarf friend of his. Interestingly, he has a young owlbear pet.

Isenheim, a dwarven Cleric of Moradin, is Chaplian for the dwarf members of the city watch and is on the scene working crowd control.

As the arguing continues the more alert citizens and visitors pick up a rhythmic sound. Slowly it clarifies into words in an unknown language - a war chant! Coming from the sky!

Down out of the blowing snowstorm dives a longship with a tattered black sail, crewed by skeletal figures. It lands in the river, glides up to the shore, and the chanting dies down as undead crewmen leap from the ship and attack!

The crowd scatters as do some of the watchmen. Isenheim and Gravis rally the few remaining guardsmen and several other people step forward to confront the raiders - Gartok, a dwarf warden of earth and stone; Dar Bloodmane, a paladin of Tempus; a mysterious elven ranger who wields a nasty greatbow; Zara, the mysterious exotic agent of House Bauer - unafraid they stand their ground as the undead sailors swarm the green.

Though unacquainted before this, the two dwarves stand shoulder to shoulder and form a strongpoint that cannot be broken. The Elf with No Name stands in the clear and fires arrows faster than the eye can see, dropping zombies left and right. Dar Bloodmane puts almost as much effort into fighting as he does reciting Tempusian Battle Chants giving glory to the war god as he struggles to make an impact on the fight. Lt. Gravis tries to order up a true battleline but several of his guards drop and he is forced to work with the mysterious and alluring Zara. The agent of House Bauer is doing fine on her own until a zombie bites into her shoulder and in response she loses control and bites it back, tearing into it with gleaming fangs! Hopefully no one noticed...

The fight is brutal but short, and thanks to the unknown heroes the undead are soon scattered about the snowy landscape in pieces. In the aftermath some approach the skyship and when they do its dragon figurehead speaks:

The oddity of the talking ship is quickly overtaken by the realization that someone must have stolen this "Ice Scepter" and unleashed a terrible curse - presumably someone now in Fallcrest! A halfling at the edge of the returning crowd tries to slink away but is caught by Gravis and Isenheim. They also find that he is carrying what could easily be described as an "Ice Scepter" wrapped in a cloth on his person.  He spills out a tale of flight, mountain travel, and theft that confirms the origin of the current problem. As the tale winds down, an obvious solution to the problem also becomes apparent. The Lord Warden is quick to pounce - "Dear friends and mighty heroes ..." - and soon enough the group has agreed to undertake the journey to the Cairn of the Winter King, taking Marko (the halfling) along with them as "community service". They are promised a reward in the form of the ruined Tower of Waiting on an island in the river - should they end the unnatural winter and return alive then the tower will be theirs.

In a quiet moment, Gravis notices that the exotically beautiful Zara seems interested in his pet Owlbear and he hopes this is a connection he can explore in the future.

As this episode closes the team gathers their supplies and prepares to board the ship, contemplating both their short-term and long-term futures. 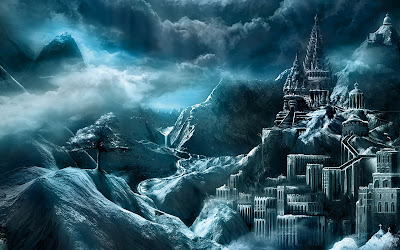 DM Notes: This was the kick-off for our new campaign and I decoded to use a published adventure, "Cairn of the Winter King", partly to see how more recent published adventures hold up, partly because I wanted to use Fallcrest and the vale in this campaign since I have not previously, and partly because I just liked it. The opening encounter is cool and makes for a memorable way to start things, I hope. It was only a 5-round fight but there was quite a bit of RP time and introductory time and connecting background time so it was a full session. Plus new characters take a little while to find the best ways to work together and we have a brand new party created without much metagame discussion so no one started out with a nice combo move ready to go.


Party composition mechanics note: We have 2 leaders, 2 defenders, and 2 strikers. That's going to be a very interesting mix, especially once they figure out all of the ways they can interact during combat. I can already tell they're going to be very tough to bring down and keep down. Perhaps it's a reaction to the last campaign's unexpected ending but regardless that's a lot of healing and some very tough characters.


The best thing was that the players were enthusiastic about starting the game up again and everyone was pretty good at coming up with an angle or a voice or some distinguishing feature about their character beyond just class/race/level/magic items, so it felt pretty good. I'm calling it a win for the group.
Posted by Blacksteel at 12:00 PM

"In a quiet moment, Gravis notices that the exotically beautiful Zara seems interested in his pet Owlbear and he hopes this is a connection he can explore in the future."

You leave Ivan alone! You dirty drow! ^_^ Wait she's got whips AND handcuffs? Are they the fuzzy kind?