Ultima 4E - The First Trilogy: Against the Triad of Evil

- Heroic Tier is Ultima I. The evil wizard Mondain has taken over the land and he must be stopped! I would use the maps and cities and monster types from U1which are pretty standard fantasy types. The land is divided into four islands which are separate realms so there is some opportunity for travel. 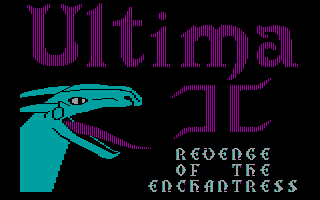 - Paragon Tier is Ultima II (sort of). A few years later, Mondain's evil apprentice has become even MORE powerful and taken over a land across the sea! The Heroes of the earlier adventure must venture to a new land and stop her! This takes place on one large landmass known as Sosaria. I see this as happening a few years of game time after the events of Heroic Tier - things quieted down then rumors begin of a new menace and the PC's (perhaps including some new faces) decide to journey there and finish the job.

- Epic Tier is Ultima III (also sort of). A few years after this the evil offspring of the prior two villains, known as "Exodus", has achieved immense power and disrupted time and space. The now legendary heroes who stopped the evil wizards must now take on their greatest challenge and journey through time and space to put a permanent end to this unholy legacy. Time gets a little fuzzy - it could start 10 years later or 10 seconds after Minax goes down -  and heroes from a variety of ages and lands could join the fight.

The biggest thing I would change here is to use the map and world of Ultima III for the second part, then use the time and space jumping theme and plot for the third part because (Spoiler alert here for a game from 1983 - BEWARE!) Exodus is a computer. In the CRPG when you finally invade Exodus' fortress even the grass attacks your party, followed by the bricks of the fortress as you move in. I think a plane-hopping, time-hopping, potentially planet or moon-hopping fight against a self-aware supercomputer would make for an awesome Epic campaign. It's a good reason to throw in some technological elements and maybe a side trip to Gamma World (for the Aftermath) and just talking about it has me ready to play. If Exodus' goal is to remake the universe into a more logical and rational place, you have a nice conflict for the characters without going stereotypical "Big Evil" after doing that in Heroic and Paragon. As the universe comes apart, the heores fight a final battle against the abomination of magic & technology. Assuming the good guys win, the final scene would be the chaos subsiding and a new world coalescing, containing many elements of the old but also much that is new, and setting the stage for the second campaign.
In building and playing this I would keep Heroic to strictly traditional medieval fantasy elements - orcs, dragons, swords, etc. I would keep the whole far realm thing and abominations way out of it. Player races would be Human, Elf, Dwarf, and Halfling. Classes would be anything from the Martial, Arcane, or Divine power sources, although I think "PHB I /Essentials HoFK only" would be a pretty solid approach.

For Paragon the action expands to the continent of Sosaria and while it is still traditional fantasy I would add in some new elements - more Greek myth type creatures to  give it a slightly different feel. I would wither go with that classical Greek/Roman feel to make it distinctive, or I would go with some Reaissance tech to move the feel in that direction instead. Expand player race choices to include PHB 2/HoFL in addition to the orignal options.  Druids are found deep in the forests of Sosaria so they need to be in at least. The idea is to expand and broaden horizons but still keep things pretty much tied to the world and mostly classic fantasy features. This really highlights the contrast when we get to Epic and normality drops away.

Then in Epic things get crazy and you can add in some technological opponents, Warforged as a PC race (maybe a rebellious sub-fragment of Exodus) weird mixed elemental types, and bring in the Far Realm stuff for the first time as the walls of reality collapse.Add in everything from the PHB3, the Realms & Eberron player guides, maybe even Dark Sun and Shadow as well as strangers from afar with new ways join the fight to save the universe. This is an anything goes phase of the game so bring it all in and SAVE THE UNIVERSE!

Some might look at this outline as "too simple" especially for Heroic and Paragon - I see it as "focused" and there is a difference. Many campaigns are a sort of sandbox where the PC's wander between adventures with no specific goal or theme and if that works for everyone then there's nothing wrong with it, but it's not the only way to play. If the players discover at first level that the land is in trouble and it's the fault of the evil wizard who has taken over the four realms, then they have a goal and everything they do after that can be in furtherance of that goal. The players can still decide how they want to go about taking down the enemy and it could easily make things more player-driven and less "what has the DM prepared for us this week." There are still dungeons to be delved and gold and magic to be acquired. Targets for player action could be local garrisons, gold shipments, monsters that the wizard has allowed to roam free, then eventually the centers of power in each realm, freeing the rightful leaders of each realm (some of which might be the PC's) and then taking down the evil wizard as the finale for Heroic Tier. Playing the rebels against an oppressive authoirty is a less-common type of campaign and puts a different spin on things than the traditional loot & level-up approach.

With Paragon it's less about inexpereinced rebel forces and more about experienced, competant commandos taking down the evil leader and her allies - dragons, giants, etc. Stealing from Star Wars is one way to go, and Lord of the RIngs may have some material worth checking here too. If you take the approach that Minax is in the process of conquering, rather than has already conquered the land, then things get that much more interesting as the party has a chance to jump into some big battles and perform heroic deeds. It also keeps Heroic and Paragon more clearly separated - one was throwing off the shackles, the other is preventing those shackles from ever being put in place.

One unusual feature of all of the Ultimas is the use of the Moongates for long-distance travel. There are "gates" in various places around the world that only appear when the moons (two moons - Trammel and Felucca) are in specific phases. It's an interesting twist on the portal concept as the timing is fixed for each gate but may not be widely known, so the players can't just learn a spell to pop across the country nor can they speed up the cycle - knowing the schedule is a big deal but then you still have to live with it, so timekeeping might play a bit more of a role within this campaign than some. A little-used moongate could provide the travel from part I to part II, and then special moongates (perhaps the systems is bent by the awakening of Exodus) could provide access to different times and planes in part III.

Another potentially interesting feature of the campaign as outlined is the turnover of player characters. In my experience most players like to start a character at low level and play them all the way up into the higher levels - most players, not all. Some people get bored, even with new powers, new gear, and new opponents to use them on. A too-heavily plotted story can become dependent on tying things to individual characetrs so that if one dies or if someone just wants to switch it screws up the plan for the campaign. The trick here is to not do that - plan for it from the beginning so that if someone does became less than thrilled with their character they are only expected to play it through that tier. When the campaign moves to the next one they are welcome to change. Ideally at least one player will keep their character for the entire campaign but even there the moongates allow consultations and a "guest appearance" by old characters now retired and the time disruption in Epic opens up anything you can think of. For anyone who thinks that character continutiy is essential I submit to you everything from X-Files to X-Men - characters can change and the story can still go on. Remember the origin of this campaign as well - very few computer game sequels let you "import" your characters from the prior game. The events may be known, but each chapter tends to have a different hero or set of heroes. It's just a part of the genre, and you can use it or ignore as you see fit.

This started off as a more speculative what-if exercise as I loked through some old computer stuff, but as I've worked through these ideas I've become convinced that this would make a pretty good campaign. There is a ton of supporting material for each Ultima game online (like here) from maps to backgrounds to music depending on how "authentic" one wants to be. Knowing the overall plotline right from the start gives the DM a better focus too, as certain confrontations will have to happen, but the rest can be very lightly sketched out around certain milestones, say the liberation of or adventuring in certain towns, or specific dungeons might contain knowledge or items needed to defeat the evil overlord. I really like this idea and knowing it may be a while before I get a chance to run with it I thought I would share - maybe it will inspire someone else out there. If I do get a chance to run it I will of course share it here. In the meantime I may have another binder to put together - just in case.
Posted by Blacksteel at 12:00 PM

This is solid gold. I can almost see the the second trilogy being played using Runequest (of course!)

Thanks, glad someone liked it! Ill have more on the second trilogy tomorrow. Not a lot of RQ though : )

You never forget your first - I loved Ultima 6.

I started with Ultima 2 and stayed for 3 and 4 in particular. Those three all came out in about a 4 year period, then 5 took a few years to come out. Ah, the days of New San Antonio and the Hotel California...