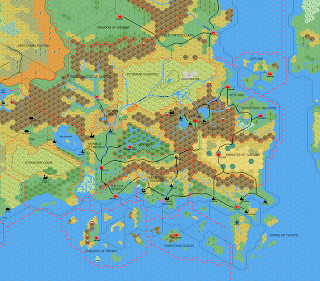 Following up on yesterday's topic of Campaign Management I have not been good at using map programs either. I really wanted to get into Campaign Cartographer but there is a learning curve and a cost and I hate spending money on something and then not using it. I tried and just could not get into it. It's so much easier for me to just grab some colored pencils and go nuts than to start clicking on tools and things. I know there is Dundjinni and there are probably others as well but none of them have really grabbed me. I have played around with Hexographer and that one I do get and it makes old-school D&D maps quite excellently. It's not much help for a Supers game, but for D&D or Gamma World and the like I think it's pretty cool. I've very slowly been working on a map for my Basic D&D campaign and I am pretty happy with it. I suspect my future in software mapping will be hand-drawing it then scanning it in and adding some separate DM-firendly and player-friendly layers to be used later.

One of the problems is that I long ago retired from the Detailed Map school of planning. I drew up big multi-sheet hexmaps of continents with cities and regions and geographical features wrtitten in. I once mapped out a city in 10' scale on about 40 sheets of graph paper with a master index and grid references. They were beautiful adnd scratched an artsy/geographical itch that I still have but they were also the opposite of how I came to run a campaign. Excessive pre-planned map details are the enemy of spontaneity and flexibility. Once you nail down where This is in relation to That then players will calculate exactly how long travel between the two takes and it gets a lot harder to be vague about things when you need to - "There's no way the city watch could be here by round 5 as it would take them AT LEAST 10 rounds to get here assuming they ran" - that kind of thing. You become somewhat bound by game physics, and violating that starts to mess with your players and damages the internal consistency of your world. Mapping everything out also uses up good names for no good reason - say you have an idea for an adventure that takes place in  a forest and you think the Howling Wood is a perfect name that hints at the theme of the adventure, but wait! You named that forest at the other end of the continent "The Howling Wood" and named the one by the PC's home base "The Greenfern Forest" - now you either have to change your map (which the players have probably already seen) or you have to skip worrying about the name and just go with it. How much easier and more satisfying is it if you had not nailed everything down at the start and just made a list of "good names" to be used as needed down the road? This is the approach I tend to take nowdays. It makes dropping things in and adapting to the actual play of the campaign a whole lot easier. My 20 year old self would probably still argue that I'm doing it wrong, but my now self says this works better for my games and players and myself NOW.

A lot of the above really applies to fantasy games more than anything else. Supers games tend to be set in the real world so mapping there is more of a tactical nature - a building, a street, that kind of thing. Good references to have there include Sprawl Sites for Shadowrun, Twilight 2000 2nd edition, and Millenium's End because they all have maps for modern type buildings that can be adapated. As far as software tools, well, Google Maps and Google Earth ain't bad. My non-detailed mapping philosophy comes in handy here too because most players don't need much of a large-scale map - "There's trouble in Florida let's go!" does not typically require hexcrawling for most Supers games. A general map of a city can be handy (Google) and then floorplpans of some typical buildings can be found online (or drawn from memory, honestly - exact measurements are rarely required) and even a satellite view of a particular street can be enough of a visual reference to have players start pulling up light poles and throwing parked cars. For post-apocalyptic games take the same kinds of things and mess them up! A marked up US map has served me well in everything from Gamma World to Rifts to Twilight 2K!. Used bookstores have atlases and city maps that can be a lot of fun to modify when prepping a campaign.

Just as an example I do not have a detailed street map of the civilized section of Phlan. I've been running the game for over a year and I haven't felt the need to make one, nor have my players asked to see one. I do have an overview map of the different sections of the ruins and how they relate to the civilized section and each other, but I don't have a detailed map of the entire ruined area either. This lets me drop in new neighborhoods without contradicting myself or screwing up a painstakingly hand-drawn map. I'm sure some people do it differently, and for a full-fleshed out sandbox type game I would probably do it differently, but this approach works for me for now.
Posted by Blacksteel at 12:00 PM