Y is for- scratch that - Z is for: Baron Zero

It's a weird thing - I don't have a "Y" character. I do have an extra "Z" though so I will be doing a Z today to make up for it and a Z tomorrow in the usual place 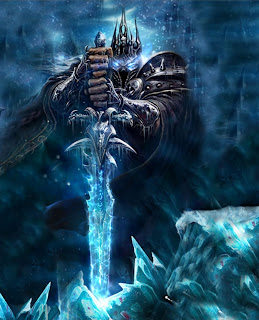 Baron Zero is an original villain for my upcoming Atomic City superhero campaign. In the campaign he will be encountered during the investigation of an alarm at the Atomic City History Museum. As the team investigates they will discover signs of a break in, a shattered block of ice, and the frozen bodies of two would-be thieves. Searching further they will encounter the baron in the medieval history section, slowly discovering just how long he has been in slumber. He has no desire to attack the PC's but he is a medieval lord and accustomed to being obeyed, so any strong words or (god forbid) attacks by the heroes will result in a fight. If he is defeated the PC's will be able to convince him to talk and tell his story. If he wins he will leave them alive and move off into the city to figure out his next course of action.

The next time they encounter him he will be trying to melt the polar ice caps to take revenge on his age-old enemy but that's another story...

Baron Zero was the eldest son of a Saxon baron in England around 1000 AD. Plagued by an invasion of ice creatures during a particularly nasty winter, his father led an expedition to the Arctic (including Zero's next-oldest brother) and left Zero in charge. They never returned so Zero consulted with seers and sages, had magical insulating armor forged for himself, and led another expedition to the north. There he encountered an elemental being known as Lord Winter who was responsible for the attacks. Zero and his army fought well against the creatures (already thinned by his father's effort) but the final attack against Lord Winter was the end. The entity froze the entire army, though this did seal him off from the world for centuries. Zero, clad in his magical armor, was frozen in a state of hibernation and dreamed for centuries as well.

One thousand years later an expedition from Atomic City University found him perfectly preserved in the Arctic ice. They cut out a block containing him, loaded it on a ship, and brought him home. In the museum, a pair of low criminals robbing the museum spied the rich gear inside the ice and attempted to melt him out. This effort awakened him and he discovered that he had new powers of cold and frost in addition to his usual handiness with a sword. Dispatching the thieves, he realized he was in a very strange place and he somehow knew that a great deal of time had passed. Wandering about he found that he was in the perfect place to learn more about what he had missed, and this is when our heroes will meet him for the first time.

I knew I wanted a somewhat unusual opponent for an early part of the campaign and Baron Zero is the result. I'm fine with a clear demarcation of black and white in my super campaigns but I like to work in a character or two who can cross that line without being contradictory. In this situation Zero is confused but not stupid and is more interested in figuring out where and when he is. What the players do upon meeting him will determine a lot of how he acts and how he is perceived - will he be the "tragic figure out of time that we tried to help" or will he be "that tough frost guy who beat us pretty badly"? We will just have to see.

I also had an idea for a scenario from an early issue of Captain America about trying to melt the icecaps which I thought was pretty cool and ties in nicely with some issues today. I needed a bad guy with the right motivation to believably try to do that and that drove some of his background too. As soon as Zero's mind stabilizes he's going to start looking for revenge on Lord Winter and he's going to find it in a very high tech way, probably by being assisted/misled by a criminal organization who offers to "help" him achieve his goal.

A final consideration was that I always liked the tragic misguided element of Mr. Freeze in the Animated Batman series and I wanted to draw a touch of that into the game as well. Plus that awesome voice by Michael Ansara - that's how I want him to sound, as close as I can get to it anyway.

Once I found the pictures in this entry  it was a done deal - this is exactly how I envisioned him. Take a look at the picture above and imagine him lifting one of the hapless thieves up off of the ground by the throat and saying in that voice "You have no comprehension of the pain I have suffered" as the crook slowly frosts over from the icy grip and aura of the Baron. Imagine waking up after 1000 years in an icy tomb to find some base thug trying to pry the sword from your hand and imagine the cold rage surging through icy veins as instinct and reflexes take over.

I wrote him up for Mutants and Masterminds (3rd edition) so here is his sheet: 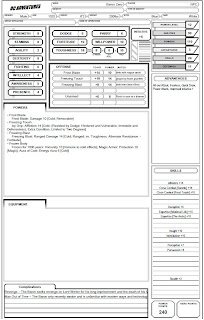 His abilities are pretty close to human, enhanced by his long entombment and magical effects. I have not tried to include every possible ice or cold power I could think of, just a few attacks that seemed to fit and some useful skills and advantages and defenses. The way I see it he just discovered that he has these powers (kind of like me as his creator being new to the game) and as tie goes on he will refine them and discover new abilities (as I get better with running him and get more experienced with the rules). Right now he can strike with his sword, freeze someone in place with his touch, and fire off a blast of cold, all while being resistant to cold, painfully cold to touch, and tough to harm in general. I don't see him as an Iceman clone, but I could see him gaining some control over Ice and Snow and over the frozen winds of the north, giving him some move object, element control, and some area attacks down the road. I would also like most of his powers to include a continuing damage and a movement-reducing trapping element but right now that's a little more than I am prepared to try and construct. The above set works just fine for a just-out-of-the-ice Baron Zero.

He probably won't show up in the first session of the campaign but the museum alarm will sound in one of the first few sessions and then he will be off and running, striding through Atomic City as the winds howl around him and his burning need for revenge leads him into a new age. 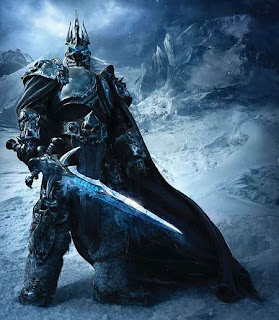 Yay! I talked someone into something!

Where'd you get the character sheet? It's quite nifty and interesting.

Yep, you did and I thank you for it! I really like it.

That is "Skis3Echargen" and it's an excel character builder which outputs that sheet. It's very handy for organizing thoughts and checking points. I'm not totally happy with the output of the thing but it's just way too useful to ignore while learning the game as in "oh that does modify that".

I found it on the forums here:
http://www.atomicthinktank.com/viewtopic.php?f=1&t=39097

Cool. Glad you're having fun with M&M 3E!