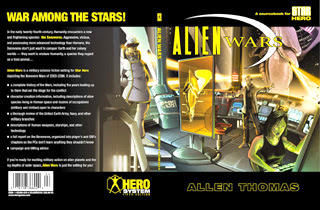 This post probably seems like it came out of left field as I haven't talked much about specific Hero products. It's been awhile since I played or ran a Hero game. So why review a book published in 2003 for a system I'm not currently using? Well, I've had this book for several years but never read it in detail. Over the last week or so I had a bright idea for a possible campaign to play with the Apprentices and I remembered having this book. It's labelled as a sourcebook for Star Hero so I thought it might have some good ideas or some useful material. As it turns out, I was completely wrong.

Alien Wars is one of the most disappointing game supplements I have read in years. When I read "Alien Wars" the first image that comes to mind is the movie "Aliens". Beyond that it could be anything from "V" to Independence Day to some of the Star Wars novels with the bio-tech alien invasion to even the Borg stuff from Star Trek. I might even think of 2300 when it comes to RPG's. This is not a generic sourcebook though - it's not about running a military-themed sci-fi campaign with an alien opponent. Nope, it's a very specific setting that fills in the 2300's  in the overall Hero universe timeline.

So what does this 184 page book give us?  Well it opens with 17 pages of history. The dullest history you can imagine, and I like history. It's paragraph after paragraph of made-up future governmental actions - laws and acts are passed, treaties are debated, various political groups try to gain the upper hand on each other. It's pointless backstory that does nothing to say "here's how to start a campaign". It's a terrible way to start off a book that theoretically anyway is supposed to involve fighting aliens.

Next we have 8 pages of racial packages. There's nothing here that made me get excited about playing in this universe but it's not unusable - some variant human types and some alien races.

Then we get 9 pages of "The United Earth Government" including exciting topics like "Government Functions and Agencies". Again, it's more background material that adds next to nothing to actually running a game.

Next is 8 pages on travel, trade, and the criminal underground. It's pretty dry.

Then we get to something actually halfway relevant to running a game - 20 pages of "The United Earth Military" which covers unit types, structure, organizations, and even a note on some medals that can be won. This is again very dry but it is useful if you are going to run a game where the players are members of  this military.

Next up is 16 pages on character creation - package deals, perks, powers. It's very mechanics-focused but that's OK as we're now 98 pages into the book and this is ony the second chapter to contain any mechanical information at all.

Chapter 7 is the armory chapter - alright, guns! Sure enough this is 37 pages of gear from guns to drugs to starships. You get 6 whole vehicles - seems like there could have been more but OK. There are 15 personal weapons including grenades and some of them are replacements over time for others (the war does last 100 years) so there's really not a ton of variety there either. We get 6 whole starships too, though one of them is a fighter and one of them is a messenger drone...hmmm.

Moving on the chapter 8 we get 9 pages of "Xenovore Intel" which is the player knowledge on the aliens attackers. It is fuzzy, as you might imagine. Oh and they eat people.

Chapter 9 is the GM's vault adding in some "what really happened" details to the earlier part of the book. It's 3 pages long.

Chapter 10 is 10 pages of the truth about the xenovores. For revealing the secrets of a hostile invading race it's pretty boring. Why do they eat people? Because they taste good. Seriously, that's it. When the xenovores were genetically engineered by an incredibly short-sighted race long ago, they made other sentients taste good to them. This is where the lame factor pretty much pegged for me. It's not for reproductive reasons like the aliens in "Aliens", they don;t get smarter in combat like the Kafers from 2300, they don't have some complicated honor/family system like Klingons or the Clans in Battletech - nope, it's that people just taste good. Y'know I could make that work in something like Encounter Critical or Gamma World, or Galaxyquest or Pigs in Space, but up until now this game has been portrayed in a very serious light but this "revelation" just killed it for me.

The final chapter is about how to run alien wars campaigns - sounds promising right? Finally, the whole point of the book! Al 5 pages of it! There's mention of realism, the chain of command, how to get around knowing that the humans win the war according to the future history in the book, keeping the xenos interesting beyond shooting them,  and which time period within the 100-year war to use. It's not bad advice but it's very specific to this setting and not all that helpful in how to set up and sustain say a yearlong campaign of this stuff.

Fortunately there is a section of campaign ideas next, and the first one is to have the PC's be the crew of a submarine stationed on an alien world... wait a minute, what? We have a sci-fi game set during an alien invasion and we're playing a sub crew? Why would anyone do that? Why would you even have a military submarine on a colony world? What are you protecting against? It even notes that the aliens don't pay much attention to aquatic regions and suggests that this be set during the early days of the invasion so clearly you aren't there to stop aliens. Other suggestions include playing soldiers, mercenaries, command staff, and even civilians hiding out after their world is invaded. I suppose that could be fun if you look at it as a variant of a zombie apocalypse game.

So overall this is a dreadfully disappointing book:

In the end I'm left wondering who decided that publishing this book was a good idea, and why? The supplements for Fantasy Hero included two pretty decent fantasy campaign worlds, but Star Hero seems to be shortchanged in this department. This is sort of a setting book but it's not a sandbox type setting of "generic interstellar government" like Traveller because it only talks about a few planets here and there and not much about the society itself. It's not even enough of a specific kind of campaign book for "grim and gritty marine squad on the sharp end of an alien attack" because so much space is spent on political maneuverings and history. How about some maps of some installations that our soldiers might be sent to reclaim? How about some ship plans? Space stations maps would be good too? This book has a lot of ideas on the setting but it doesn't have much in the way of tools to help a DM actually run a campaign in that setting, and that's probably the most disappointing thing about it. The ghosts of Apone, Vasquez, and Hudson are not pleased.
Posted by Blacksteel at 11:00 AM