Return to the Ruins of Adventure - Session 20: Thunder and Lightning 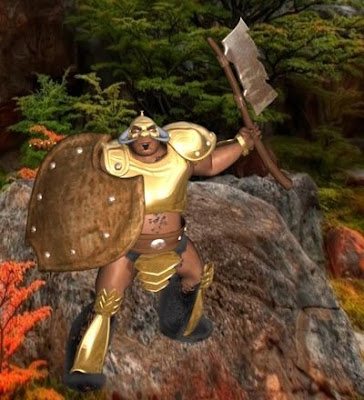 The party decides to press on while Mikal takes time to copy down some of the symbols and writings in the tomb.

Proceeding down the hallway the heroes turn a corner and see firelight coming from a room ahead. Approaching, they see a large room with two platforms holding large braziers that light the area with blazing flames.  They also see two big ogres in heavy bronze armor and one obvious ogre shaman. Unfortunately their utter lack of stealth means that the ogres see them as well and with shouts("They must not interrupt the king!") they form up in a fighting line and battle commences.

The two armored ogres form up between the brazier platforms, blocking the way forward. Kordan responds by throwing his shield in a spinning arc that smashes one of them in the face before returning to his hand. The shaman standing behind his line of defenders unleashes electric death from his staff, blasting Kordan and Jovanni pretty severely. The bard begins a song of defiance to steady the party's nerves  The shaman then calls down a storm over the party, blasting Kordan and Uthal, while Jovanni is hit especially hard.

Sensing that they need to seize the initiative, Uthal charges the ogre line and with his spear manages to push one back, breaking the line. Kordan, battered but unbowed, follows up and brings down the wounded ogre with a deep stab from his sword. Now the battle loosens up as the combatants spread out across the room.

Althea teleports in behind the ogres and watches as her Thunderwave utterly fails to harm them. The big armored ogre also lands a solid hit on Kordan (Revenge!) and he falls to the floor. The shaman unloads a thunderous blast of his own and leaves Althea and Uthal's ears ringing.

Desperate, the party fights with renewed ferocity and Jovanni strikes the killing blow on the Ogre Storm Shaman with one of his magical spells. The lone armored ironclad makes a strangely civilized salute with his mighty maul and then sells his life dearly, buying time for his lord to complete the ceremony begun so long ago.

Pausing for a moment to catch their breath, Althea claims the shaman's staff while Jovanni pulls some gold armbands off of the ogre guards. The heroes then sneak (as best they can) down the hall and take a peek around the corner. The see another decorated room illuminated by the radiance from a large pool of smoky grey-black vaporous energy. They realize this is likely the opening to the shadowfell they were sent to locate and destroy. A huge armored ogre zombie stands before the pool, and a loud chanting can be heard coming from somewhere behind the pool. As Mikal comes hustling up they realize this is the end of their quest and they prepare for the battle that is likely to come.


DM Notes: So much for working in more encounters. The warlock's player couldn't make it so we left him in the previous room studying the tomb paintings. Much time was spent catching up after a 2-week layoff and I didn't push especially hard as I wanted everyone to be present for the final battle if possible. As it turned out the fight with the shaman and the guards went a full 10 rounds, so it ate up quite a bit of time anyway. It was a good fight, as most of them are in 4E at this point, and no one seemed terribly put out by only working in one encounter for the night.


Next session: The final confrontation with the Ogre King!
Posted by Blacksteel at 11:00 AM

Nope, we showed up (most of us), we had a great time, there was an exciting eventful combat to experience, loot to be had, and plenty of laughs and jokes as the dice fell where they would.

Whether it was one long combat or 4 brief ones doesn't matter so much to me as long as we're having a good time. ^_^