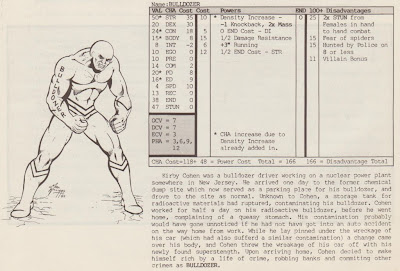 Welcome back to another round of analyzing some of the "lesser" stars of published RPG characters. Today's contestant is from "Enemies II" published in 1982 for Champions, then in what was technically 2nd edition, although editions 1 through 5 are pretty much interchangeable.

"Bulldozer" - I like it. The name implies strength, toughness, possibly some kind of overrun attack, and maybe some kind of mechanical element like a battlesuit. Most of those are not present in this character.

Technical issues - Well, he's really strong as 50 Str is about par for a Brick in this edition of the game. Con of 24 and Body of 15 is OK. His powers though...

Let's give him the test: An average 10d6 punch is going to do 10 Body and 35 Stun. His PD will stop the Body and allow 15 Stun through. Con of 24 means he's not Stunned and Stun of 47 means he can take 3 or 4 of these punches before he drops - not too bad. His OCV, Spd, and End are on the low end but not crippling.  However, if he gets punched by a girl it gets very ugly. He still stops the Body, but the Stun goes to 70 on average. That means he stops 20 points and then 50 goes through, knocking him unconscious in one shot! I think I would change that "Fear of Spiders" to "Fear of Female Bricks".

Technically, the only redeeming thing here is his point cost. Look at that - he's only built on 166 points! That's about half of what most serious Supervillains were built on in this book, so maybe there's a reason he's kind of weak. Build-wise I would spend my points differently, but as long as he's not fighting a girl he's not terrible.

The worst part of this character isn't so much the powers or the background - it's the costume. Look at that! The only thing that makes him distinctive is that it says "B-U-L-L-D-O-Z-E-R" down the side of his arm! How lame is that? It's like a soccer jersey or some showy brand, not a super-suit! Of course, given the outccry over the lameness of this guy's look, they would surely fix it in the next edition's rogue's gallery 7 years later, right? 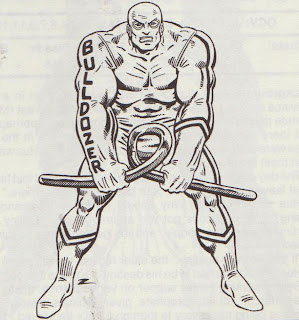 So how would I fix this guy? I kind of like the supered-up construction worker but I think Marvel's Wrecking Crew did it better than this. I see three good options:

Super-names tend to be fairly literal in the sense of "what they do or look like" not literal in the "name running down one arm" sense so it would be nice to have some visual bulldozery element here.

You'd think that 13 years later and the NEXT next edition of the game and it's attendant enemies book they would have dropped this guy or come up with a better look. I'll let you be the judge of 5th Edition Bulldozer: 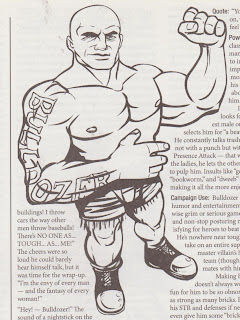 I like him as either the Construction Worker Juggernaut idea or the Armored Guy. Maybe the the Armored version carries some sort of multi-tool/nano-tech/memory metal shield that can transform into a Shovel (Lift and Knockback?), a Drill (Tunneling) and other simple forms for varies construction themed abilities.

It almost looks like 5e Bulldozer is wearing Chuck Taylors...

I see that, Heh. He's supposed to be kind of a pro wrestler in 5th edition but I think I like that even less than the original take. It also makes him look like a mul from Dark Sun.