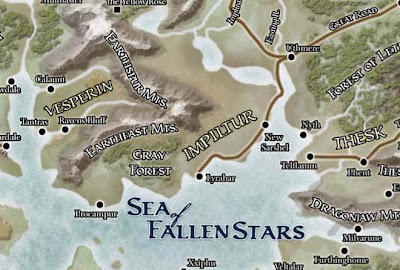 After much pondering I've decided to go with Impiltur in the Forgotten Realms for the new location of the second 4E campaign. I did this for multiple reasons:

One of the ideas is that the kingdom in the past was ruled by a council of 12 Paladins when the rulers proved incapable, and that adds an element of King Arthur to the feel that I intend to play up. Some of the background includes a king that disappeared with his bodyguard while chasing orcs into the mountains and 100 magical swords that were lost as well. The 4E changes include the coastline moving out leaving some of the formerly coastal cities high and dry while the government has broken down and thieves have taken over some of the largest cities. That said, the old material has a really good Knights & Wizards & Clerics vibe to it. I get a nice old-school, almost Greyhawkian feel in what material I have found and thin it will work well for them.

The neighboring areas include Damara and Vaasa and those could set the stage for everything from expansion into southern Damara's weak baronies to conflicts with the Warlock Knights of Vaasa to pirate raids along the coast.

(I almost went with Damara as the setting but one thing I don't like about Damara's back-story is that the big conflict in 1E/2E was with the Witch-King of Vaasa and his master Orcus as told in the Bloodstone Pass modules. Now Realms canon has an NPC completing that storyline and becoming king of Damara, leaving a lot of less-cool things for the PC's to do - I dislike that approach. The right way to do it would be to go back and run my players through that series and set them up as the heroes of the kingdom, but I just don't want to drop back that far in time or try and convert 4 big 1E/2E adventures to 4E- I'm kind of making 4E the "Year Zero" of MY Forgotten Realms campaigns. I may make it a circular progression where a year or two down the road my players get the chance to do that as the witch king comes to power again and has to be dealt with all over again - THIS TIME for good. Then I would convert the Bloodstone adventures to 4E and run them in this newer age.)

Back to Impiltur: So with nearly zero canon getting in my way I am free to do what I want. I have two goals here - one, sandbox a bit, let the boys decide where they want to go and let them wander the countryside part of the time - two, work through some of the published adventures for 4E as I want to see them in action, regardless of the word of mouth about some of them. So yes, I will likely start them off (after a brief wandering  encounter or two) with Keep on the Shadowfell and then we will see where they want to go after that. Thunderspire Labyrinth is a possibility, or maybe we go with Scales of War adventures after that as a sort of intermittent adventure path.

One project I have in mind is to make up a map of Impiltur in Hexographer which I have not done before now. I want to get familiar with  it for some regional maps as well so given some time I should have some nice-looking maps to go with the campaign. I may drop in the features of the Nentir Vale as well - there's room - and maybe the Elsir Vale (Scales of War) too. I can see this being my starting area for future campaigns in the Realms too so I want to scatter some interesting sites across the map.

New characters have already been made - so far we have a Beastmaster Ranger, a Tempest Fighter, a Bard, and a Wizard. I'll give them a chance to tie them in to the area a little more tightly - now that I know where we will be playing -  and then we will kick things off with a fight of some kind and then I will draw them in to KotS with rumors and NPC ties.
Posted by Blacksteel at 11:00 AM