This post has nothing to do with actually running or playing a game and  is probably getting into the realm of "too much detail" but I thought I would share it anyway on the off chance it might inspire someone else out there.

One of the things I do when I think of an idea for a new campaign is that I set aside a 3-ring binder, stick some paper in it and start writing down notes. These are usually big-scale notes in the early going - system, character limitations, a rough map, notes on gods and empires, and some adventure ideas. I may scour the internet for things I can use and start sticking them in the binder too. At some point pocket dividers and section dividers will probably come into play too. Pretty soon I have a semi-organized mass of information that at least captures the high points of my original concepts. There's some writing on the computer too but I'm pretty set on printing that out and sticking it in a binder as formats may change and hard drives may crash, but I have binders with notes from 20+ years ago - even after the Commodore 64 that some of them were written on is long gone. On the downside this can leave you with a shelf full of plain white or black binders that are both difficult to identify from the outside and boring to look at.

I do not like the boring binder (it makes the thing look like work instead of fun) and sometimes an idea doesn't really take off until I have something visual anyway so enter the "Campaign Cover". I like to think of them as the cover to the best-selling novel or DVD or the movie poster for the film of the campaign. I started doing this right before D&D 3rd edition took off so I've been doing it for about 11 or 12 years now. Early efforts were primitive often consisting of a printed out map or a cut-up copy of a spare magazine cover, but more capable PC's and the power of the internet made it a lot easier to do and made the end product much better. The basic idea is to roam around online and find some pictures (and maybe maps) that cover some of what the campaign is about. I did one for a Mechwarrior campaign and a few for some early d20 games but I'm skipping over those. My favorite one so far is this one: 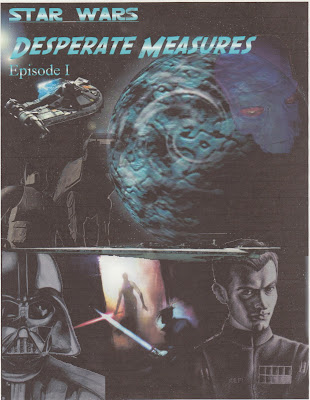 This was for (as you may have guessed) my limited "special forces" campaign that I ran around 2006 or so. (That's just a scan of the cover as the original "Frankenstein" jpeg is long gone.) I have zero graphic design training so I just put together a bunch of stuff that was in the adventure and was pretty happy with it. The best thing is that there is a ton of Star Wars fan art out there and it means you can find a pic of almost anything you need. The elements here were the players' ship, the planet they were investigating, the At-At's they would be facing, the Duro native population they would be meeting, Moff Lestrade (apparently played by Jude Law - bottom right) who was running the project they would end up foiling, a confrontation between a good Jedi and a fallen one, and of course Vader and his SSD because every adventure should have an iconic appearance somewhere, It's not fancy but I spent a few hours putting it together over a few days and was pretty happy that I managed to cover that much.

Now there is the question of time in these, as in  "how much time do you want to spend doing this"? Sometimes I have an image in mind right from the start and those are pretty easy. Other times it develops organically as I search through images in my archives or online  and say "Hey that's cool"  and drop it into the folder to be mixed together later.

There's also a question of composition - does a big jumbled up mess of pictures (a collage, really) say what you want it to say or is one solid image say it all? Here's one of the latter: 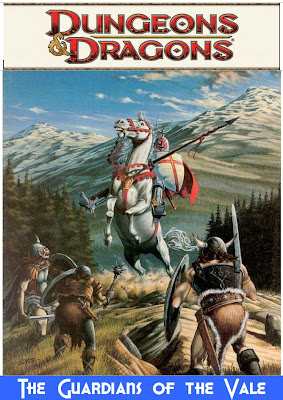 This is from Dragon #62, one of my favorite covers of all time - I like the look of the knight, I like the multiple opponents, and I like the background. It's by Larry Elmore and while I neither worship nor hate him as some do, this one always stuck with me. I used it for the guardians of the Vale because I envisioned a fair amount of outdoor travel in that game and so I went simple - trimmed off D&D logo, typed up campaign name at the bottom, and one big picture in the center. Too bad that campaign is over now, I really liked this one.

Now for a more jumbled one: 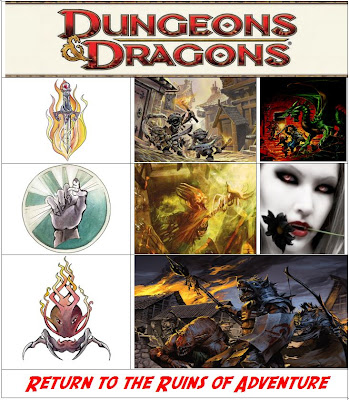 Now for this one I wanted to include more than one image as the campaign is a series of smaller runs against various opponents in shorter arcs and chunks. I wanted the symbols of some major organizations so that it wasn't all paintings, and I wanted different sizes and palettes in there too. I made a back cover for this one as well: 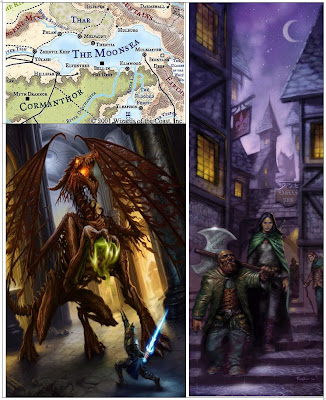 There's a reason all of those pictures are in there, but I won't go into too much details as some of my players read the blog and I don't need them thinking about this too much.

Finally, if you're going to go to all that trouble, you might as well make a spine insert for them too: 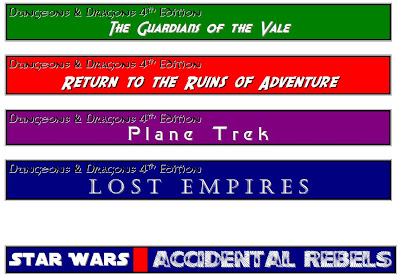 Not nearly as pretty but they do make it easier to pull the right binder - I usually have several sitting on the shelf so it helps. For the D&D binders having this "unified" approach for one game is kind of a new thing but it does make them look like they belong together on the shelf. For the Star Wars one I just wanted it to look at home next to the pile of d6 books and it really does. These are also fun because they give me a chance to use all those interesting fonts I've collected over the years.

I haven't done any covers for Atomic City or the other new campaigns yet but when I do I will go ahead and post them up. They will probably not look much better, but they do make me happy.

Anyway that's probably enough of a trip into "gaming minutia" for now. Stay tuned for future installments covering "How I Use Index Cards" and "The Greatness of Pocket Dividers".

See, I think this is important. I call it 'still being analog'. I have a shelf lined with binders, but mine are constantly morphing. I use masking tape on the spine and a sharpie to give the group title then type a page of contents and insert into the 'view' sleeve.

I can work better this way. Now if I had the interface in Minority Report that would be ultimate, but until you give me a big electronic table where I can work like that my binders and tiny notepads (which are everywhere with a pen clipped to them just in case that idea comes and you don't want to lose it :) will have to do. I'll stick with my paper hard drives :)

And yes, I still have the first handwritten notebook paper 3 page adventure I wrote when I DM'd my first session. :)

I've done campaign folders in the past, but I love the idea of creating a custom cover to go with them. Thanks for the inspiration!

This is an awesome idea! I have binders full of stuff (very slowly being transferred to Obsidian Portal), but never gave them a custom look.

Yep, analog is the way to go for me - old habits die hard. Even the games I'm running now go analog first, then they go up on the blog when I sit down to review.

Album covers may be dead but Campaign Covers can easily make the jump to digital! I've seen some cool ones on Obsidian Portal for some campaigns so I know there are a t least a few others out there thinking like me.

That is a great idea. I can see how that would allow you to keep everything together. I’ve done pretty much the same thing with my Megadungeon, but that was a first for me. Prior to that everything was just… all over the place.

And I love your Desperate Measures cover. Very cool, even if not the most professional looking.

The Return to the Ruins of Adventure doesn’t grab me as much, I think because of the radically different styles of the artwork.

Well like I said, I have no training on this - I just pick stuff I like. It helps pull everything together as I'm ramping up for a new campaign.

RTROA is a little different style - I have not used the framing grid before with the totally separate pics. I am not 100% happy with it myself but not every experiment is a perfect success. The next time I will probably handle it differently.