Guardians of the Vale - Final Placement of the Campaign 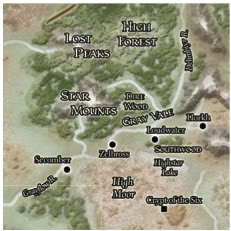 So I've had a fair amount of placement chaos with this campaign. In the end I've placed it in the sample starting area from the FR Campaign Guide. Why? Well...

The generic campaign Nentir Vale idea was one I liked but it really isn't compatible with a Forgotten Realms campaign as the history and the gods are incompatible. Yes I could convert them but what's the point of converting a nice little start area that much? Plus I figure I can use it as-is in my Legendary Greyhawk idea whenever I finally get to run that. So, no Nentir Vale in Faerun.

Damara has potential as it's close to Vaasa (Warlock Knights and the Witch King) and not terribly detailed. The geography is close enough to the Nentir Vale that I could almost fit it in. The land has ties to Orcus cultists going back into history so it fits well with the main theme of the 4E Adventure Path. The great glacier to the north could allow for some good adventures too. I even found a nice supplement that adds more of an Orcus theme to the first 3 adventures and I really liked the way it was shaping up - the fight against Orcus, the other stuff...wait Orcus is trying to take the power of the Raven Queen? FR doesn't have a Raven Queen. The usual substitute is Shar, but she's a greater goddess that's a pretty big player in things. Really? This isn't going to work real well in my head. Let's save it for the Ancient Greyhawk campaign or until I rework it to better fit in Damara.


Additionally I started thinking and I'm not sure I want the Apprentices' first big campaign to center around a demon prince...it's just not my favorite theme for the youngsters. Tiamat maybe - big evil dragons are cooler than the demon undead guy at their age. This totally blows my original plan. Great.

So I started looking at the Scales of War adventure path - it's built around dragons and things. The first adventure is...not impressive. The raid part is fine but the dungeon is kind of a mess. The second adventure though is very cool and looks like something straight out of Lord of the Rings - I can use that. But I still need a setting.

I re-read Loudwater in the FR Campaign Guide and it's good. It has a nice little map with just enough detail to be useful. So there, goodbye Fallcrest, hello Loudwater. It's also located in a very interesting part of Faerun locally, plus it's within a fairly short journey of Baldur's Gate, Waterdeep. and the Moonsea (where the other game is located). Forest, Mountains, Desert, Badlands are all close by. This looks like a nice region to start in with a lot of small areas I can put my own spin on.

So the plan is this: The campaign will be centered in the Gray Vale Region. Loudwater will be the starting town but they can wander wherever they want.  They will finish up the Kobold Hall trip and still be at level 1. This will roll right into the raid encounter and the Ogre Barrow adventure which should put them at 2nd. This will lead into whatever part of the Rivenroar scenario I decide to steal and the Icy Spire adventure from the Dungeon Annual which is set nearby and looks pretty cool. This should put them up around 3rd level. At that point I will run them through Siege of Borodin's Watch (Scales of War #2) or the Scepter Tower of Spellgard, whichever they choose to do. After that it's probably Thunderpsire Labyrinth which will be located under the Star Mounts. We may do Pyramid of Shadows or we may do more Scales of War after that, it really depends on what they decide to pursue - which is as it should be.

So I still get to work in some of the adventure path. If we have enough low-level time I may end up running the Realms conversion of Keep on the Shadowfell which I disliked originally but I may be OK with now since I'm reserving the Orcus version for another campaign.  It may come into play along with Scepter Tower if I have another group start up in the same area - a handy option to have.

One campaign plotted out for the first 5 levels, the groundwork for another campaign laid - that's some good work. One of the Apprentices is now reading the 4E FR Player's Guide and the other one will read it afterwards so their dip into Realmslore has begun. With the first adventure underway we're off to a good start.
Posted by Blacksteel at 11:00 AM