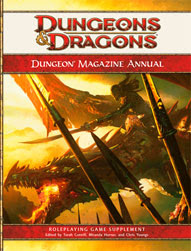 This will be a short review  as this is a pretty straightforward book. It's a 160 page hardback published in 2010 and consists entirely of adventures previously published as part of DDI on the WOTC website. There are only 5 adventures (2xLvl 3, lvl 7, lvl 15, and lvl 21) here treated with far more depth than the "Dungeon Delve" encounters. Knowing that my advice to another DM would be to flip through this book and read the summary for each adventure and see if enough of them interest you to buy it. That's really the best way to check out this book.

For myself there were three reasons I purchased it:
1) I've become something of a completist on 4E D&D books - gotta catch 'em all!
2) I saw immediate use for one of the adventures and a pretty good chance I could use  almost all of the rest at some point
3) It was cheap, like single-digits cheap.

I'm not going to review each of the adventures. They are a bit of a grab-bag as one of them is technically Forgotten Realms though there is nothing tied to the Realms in it, one is from the middle of the Scales of War adventure path which is kind of an odd choice - why not publish the whole path as a book? As it is, one of a series is kind of hard to use on its own - and one is from Eberron and is pretty heavily Eberron flavored though I am contemplating ways to drop it into the Realms. This kind of material is nice in that as a DM you can accumulate adventures and delve-type encounters and keep a general idea of what you have in the back of your mind which allows you to pull out level-appropriate random side treks out whenever the players decide to go wandering the countryside. Plus if there is one you like yo ucan foreshadow a bit and drop in hints and links to it during the earlier adventures of your group.

So in the end there is nothing here I think is bad, plenty I think is good, and if you can find it a reasonable price then it's a good addition to your DM Resource Library.
Posted by Blacksteel at 11:00 AM