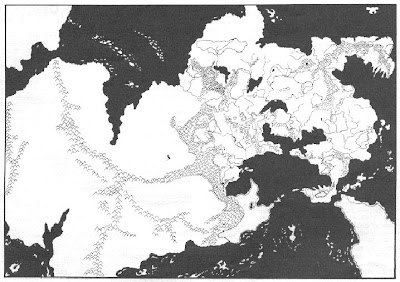 So I have multiple problems. I have a fairly good run of continuity over about 30 years in Greyhawk. I have a new edition of D&D that really doesn't fit with the world as we know it. I am also looking at a "Return to 1st Edition" campaign that I want to run in Greyhawk.

Now I've talked about one way to use 4E with Greyhawk here. I still like that idea and I may still use it., but I've thought of another since then: Instead of trying to make Greyhawk fit 4E, make 4E fit Greyhawk. Cut ruthlessly from the available races and consider cutting the available classes.

Race-wise the Dragonborn and everything from PHB 3 are out. I would consider leaving Tieflings in due to GH's history of demons & devils mixing it up with humans -see Iuz, see Alu-Demons, see Iggwilv/Grazzt, etc. I would change Goliaths to half-ogres. I would probably dump Devas but I could be talked into leaving them if someone really wanted to play one. Eladrin might have to go or maybe leave them in as Gray Elves, I'm not sure. Shifters might be OK to keep but they are not a major race in any world anyway and I kind of like the idea of the Rhennee having a bunch of shifters in their ranks as a kind of racial secret. Otherwise, Dwarves, Elves, Halflings, Humans, Gnomes, and Half-Orcs are the available races, period.

Class-wise the proliferation of classes might be alright. I would probably ban the PHB3 psionic classes but then again, there is a precedent for psionics in GH so maybe it's OK after all. Having a lot more class options (PHB1 + PHB2 + Power books) and 4E's multiclassing, Paragon Paths, and Epic Destinies does make it easier to explain some of the wilder NPC writeups like Murlynd and Kelanen and some of the entries in the Rogue's gallery.

Even power sources can be a factor here: Dwarves in 1E can really only be Fighters, Thieves, and Clerics. To replicate this in 4E, just make it a campaign rule that dwarves can't take any class with an arcane power source. You could make up a nice little chart with races down one side and power sources across the top like this:

Humans are the most versatile, Half-Elves and Half-Orcs are almost there, and everyone else gets to pick from 3 of the 5 sources. If you included Tieflings I would give them Arcane/Divine/Martial and if you used Drow I would probably give them the same as Elves. If you aren't using the psionic source I would probably switch Elves & Drow to Arcane/Divine/Martial because hey, you need those Drow Clerics right?

Now unlike the Time of Legends idea this is definitely going to be a subset of 4E and may not be "fun" for hardcore 4E players, but I suspect older D&D players would like it just fine. I know I would be willing to give it a try. We also now have a WOTC precedent for it as the new Dark Sun campaign pretty much eliminates the Divine power source altogether and no one seems terribly upset by this.

For the gods I would use the standard Greyhawk deities. Your divine players should be able to adapt pretty easily.

Magic items: This could be a problem as 4E assumes a fairly high rate of magic item acquisition and disposal, higher than some may like. I don't have a huge problem with it because I can tell you that my 7th level fighter in 1E wasn't running around with a +1 sword, so I would probably just use the standard 4E approach and control the flavor of what items I included. For others though, the DMG2 has a good section on page 138 that describes how to go with a low-magic game and not wreck the mechanics. I like it and when I eventually run a 4E Greyhawk game  I may go with it just for the novelty to make sure GH feels different than the Realms.

For monsters, well between the 3 monster manuals out as I write this, you should have no problem recreating old favorite adventures.

The only tricky area is almost a metagame one and that is planar cosmology. The new game has a simpler layout for the planes and it eliminates the Ethereal, Elemental (and para-elemental), Positive, and Negative material planes. However, this is not as drastic as it might seem.  We may have lost the + & - but we have gained the Feywild, a place where life is abundant, and the Shadowfell, the dark place that powers undead - sound familiar? The Astral plane is still the cosmic sea that everyone uses to get to the homes of the gods, and it's still patrolled by Githyanki and Astral Dreadnaughts. There is still an Abyss and a Nine Hells. Instead of distinct elemental planes there is the Elemental Chaos which is a mix of all of them - perhaps mortals have had an imperfect understanding of how these things are laid out all along. I don't see this as a real problem once you take a look at it and dig in a bit. If it helps a bit then just use the traditional names from 1E and the descriptions and mechanics from 4E and you should be fine.

Continuity - how would I handle this? Probably with a small timeline jump. Campaign currently in the 580's? Well after the events of Vecna Lives, it turns out the super-lich demi-god has been interfering with the normal flow of magic in the world for quite some time. After his defeat (not a bad way to close out a 1E or 2E campaign) magic gets a little stronger which explains where some of the new classes come from. I'd start things up 10 years after that and let your players move forward. Maybe just jump it up to CY 600, say the Great Kingdom is reunited and call it The New Era. Heck, start a new calendar and make it Year 1 of the new Era.

So there it is - after looking through some of the old-school material as I prep for a 1E game and having a lot more 4E experience and resources than when I started, I now think it's possible to run a good, fun, 4E game in the traditional Greyhawk time period. With a little editing of the options, you can make the rules fit the world you want to use rather than trying to shoehorn it in the other way around.

Next: Now how do I fit a 1E campaign in at roughly the same time?