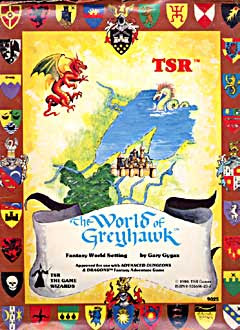 A while back I looked over some of my notes and did some rough estimating and figured out that all of my campaigns in Greyhawk since 1st edition only add up to about 5 years of elapsed game time. It struck me as a little odd that if everything had unfolded in linear fashion the calendar would only be at CY 581 or so. Of course this isn't the case exactly as there were some timeline jumps in there, particularly with 3rd edition. A quick run-through:

My early AD&D games were mostly one-shot run-throughs of the TSR modules and some of the adventures from Dragon. These were the days when a coherent, serial campaign was just not going to happen as I played with at least 4 different DM's across 3 states, none of whom really cared about making a cohesive world. Back then the DM said "I got Bone Hill and it's for levels 2-4 so bring a character for it on Saturday" and that's what we did. Even then though, my guys were based in Greyhawk.

Once I started DM-ing part of the time, I set everything in Greyhawk, even if it wasn't originally set there in the module - Isle of Dread, "Chagmat" and "Quest for the Midas Orb" from Dragon - all of these went somewhere on that Darlene Map. Even if the PC's weren't all placed in my campaign, the history of those modules became the early history of MY Greyhawk. Altogether it only covered about 2 years of game time (I made my own calendar and made notes on when things happened) even though it was played out over almost 10 years.

For 2nd edition I ran PC's through the different parts of Fate of Istus. I didn't have a lot of Assassins or Monks in my game so it didn't matter so much that they were going away, but I thought it was a cool idea to have a world-hopping adventure like that. Not all of it was great, but I liked it at the time. Coherency didn't really matter either as the characters changed almost every session anyway, but the players knew it was part of a big storyline at least.

I prety much ignored the Greyhawk Wars, and I didn't own From the Ashes during this time, so I just let rumors of impending war fly in the background (using some of the old Events from the World of Greyhawk column in Dragon) and continued with the looting and slaying.

Unlike 1st edition, most of my 2nd edition adventures were homebrew affairs. I used Dyvers a lot as it was the undetailed city that was a rival of sorts to Greyhawk in my mind. I had it splintered by rival thieves' guilds and had PC's choosing sides and going to work for the guilds or the city government. I suspect a little Shadowrun was rubbing off on my D&D game  but the players' liked it. There was also a trip to the Bright Desert to capture a blue dragon hatchling with a set of Iron Bands of Bilarro that my players still talk about to this day. All of that covered only about 2 years of game time even though it also happened over almost 10 years of real time. We did trade off games a lot - I played a fair amount of 2nd edition in the Forgotten Realms while running exclusively in Greyhawk - so maybe that's what spread it out so much.

For 3rd edition, I started it off by running it in Greyhawk (Sunless Citadel) and ran 3E from the fall of 2000 right after the books came out until the fall of 2009. Now during this run I did not stay exclusive to Greyhawk. Kalamar and the Scarred Lands were other campaign worlds I ran for big chunks of that time but We made 2 big runs through GH during that time. Both involved Return to the Temple of Elemental Evil, so I retroactively jumped the campaign forward about 10 years into the 580's to put an appropriate distance between TOEE and the Return. We played for 18 months in the first stretch, which was only about 6 months of game time, and ended up with a TPK in the Crater Ridge Mines. We took a break for a while, then the Players wanted to come back to finish the job. I decided a month of game time had passed and various powers wanted to know what had happened to the first group, so they sent a second band of adventurers (some of whom were related to the members of the first bunch like Party #2's half-orc brother of Party #1's elven cleric - it's a long story) in to find out what happened to the first.  I partially restocked the emptied section of the mines and we picked up back in good old Verbobonc. This ran for about 6 months of real time, only about another 2 months of game time, and ended with another TPK. Sigh. RttTOEE can be a very unforgiving adventure in places.

At this point they decided they didn't care about finishing the adventure, they just wanted to move on. Now this is a problem because the adventure deals with a world-spanning threat and if no one does anything then the multiverse is destroyed. I couldn't have this loose end hanging out there...if nothing is handled then GH ends in the 590's and I wasn't ready for that. I liked my rag-tag continuity.

I had been reading another group's log of their handling of the adventure on EN World or some similar site so when they finished the adventure I noted the highlights of their campaign and used it for my own - this 3rd party had finally managed to end the threat of the Elemental Evil and I added their names to tavern talk notes for that time, in case we started up another GH campaign - there would be no more Returning, we were past that one. New campaign = new adventures. Plus I thought it was a little funny that there were players who were part of my campaign who didn't know it and whom I had never met.

So now we come to 4th edition. I've been running my first 4E campaign in the Forgotten Realms (yes I know but it works well and I had a solid concept that fit there the best) and my Greyhawk game has been dormant for about 4 years, but I like the idea of using it for the new version in some fashion. .I am also planning to start up a 1st edition AD&D game soon and run through a bunch of old classics in their original flavor, so of course Greyhawk must be the setting. How to handle both of these and still keep some kind of continuity? More tomorrow.