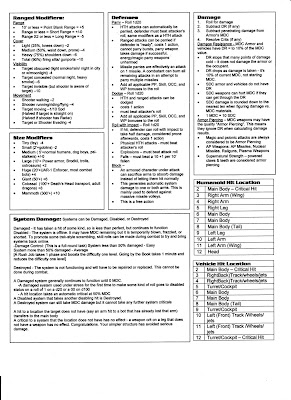 Page 2 of the Cheatsheet covers the ranged attack modifiers, size modifiers (something else Rifts really needed), then the Defense and Damage process and tables.  So someone shooting will mainly look at page 1 while someone being shot will mainly look at page 2 - the goal was to not have to flip back and forth a whole lot.
A lot of this is purely my own addition to the game, and it can look like a lot but it's really not bad once a player has been through the sequence one time. Plus it's a lot more organized compared to the by-the-book system. Additionally my players like to know where they hit that giant robot - cockpit, gun, arm, leg. I have also found that hit location sometimes helps a fairly lethal game - it's better to lose an arm than the whole character most of the time, and in a world of magic and super-tech replacing it isn't all that hard.
I will say that looking at it now that the DR/armor piercing thing might be a little more detail than I would want if I started a new campaign tomorrow. It is cool, but it is one more step in resolving combat that might be better left out. I wanted vehicles and robots to have more to them than a big gun and a 500 MDC main body, so detail was what I was looking for at the time - it might not be everyone's cup of tea.
There's also the system damage section it makes more sense with page 3 which has the crit charts. More on that tomorrow.
Posted by Blacksteel at 12:00 PM