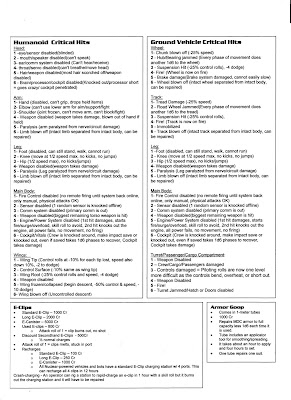 Most of this page is taken up with the two critical hit tables - one for humanoid, one for vehicles. I spent a lot of time working these out and tried to come up with some concrete effects that could be fun in the game and give players a chance to decide when enough was enough and it was time to retreat. It also gave a parallel path for driving off NPC bad guys beyond just mowing through hundreds of MDC and many minutes of playing time. If you can blow out the power plant or kill the fire control or the main weapon systems, then the fight may well be over. It also gives a chance for some characters to shine by getting damaged systems back online - "Scotty I need warp power in 3 mniutes or we're all dead" just made the fight that much more interesting than yet another session of shaving down 500 MDC on that Northern Gun Explorer Bot.

The E-clip section is there because I don't like the pricing structure in the main book. I also wanted options for bad things to happen in combat and some specificity in charging up e-clips in the field.

The Armor Goop is my own creation from back in my first campaign in the early 90's. In a mega-damage world, your body armor effectively becomes your hit points, as no normal character can withstand even a single point of MD. Considering that a typical rifle does 4d6 MD per attack and a fairly standard set of MD Body armor has 50 points, with 80 being a "heavy" suit, it only takes one firefight to shred your armor. The armor repair rules in the book are limited and ridiculous and make no sense as far as field repairs so I decided we needed a "healing potion" for body armor, ala D&D. Thus, armor goop: It comes in a 1-meter tube (like a toothpaste tube)  about 6 inches in diameter and there's a spreading tool attached to the cap. After opening the cap the user can squeeze out the goop and spread it around with the tool. It takes about an hour to fix one suit of armor and the goop sets in about 4 hours. It fixes all but 1d6 of the damage to the armor, so the 50-point suit will have from 44-49 points after being "gooped" If it's gooped again before being repaired in a shop, it loses another d6.

The whole point of this is to allow players to have more than one combat before heading back to town to buy new armor, or having to haul around multiple sets of it. It does still put a clock on the players in that it's not a 100% fix, so they will eventually have to get some work done, but it prevents the momentum-killing post-combat regroup and retreat - instead the party just patches up overnight then continues.

Anyway that's the end of the Rifts bit for now. If anyone is interested I can put them up on a file site if they need a better copy. As you might guess I really do like a lot of the ideas in Rifts I just don't like the mechanical execution and expression of some of those ideas. Even when I'm not running or playing it, the ideas never stop for long. I've recently been re-reading the old Marvel Super Heroes RPG (FASERIP) thinking about using it as the introductory supers game for the apprentices, and it struck me that it might  be worth a shot at converting RIFTS to FASERIP. I'll let you know how that goes.

I really like these cheat sheets! I'm wondering if you have them in Word or PDF format?

If you anything to share, you can reach me at dlarkins78 (at) gmail (dot) com.

Is there a PDF available for your house rules/cheatsheets? I'd love to give it a shot running Rifts this way. Thanks!