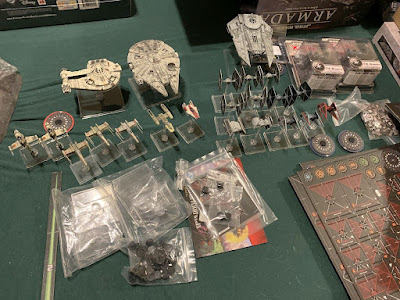 Our first dive into the X-Wing miniatures game was, uh, a -few- years ago ... and it stuck around as an every-once-in-a-while game for the apprentices and myself but it petered out eventually and the announcement of a 2nd edition in 2019 was a perfect reason to wash my hands of it for the foreseeable future. I'm not usually looking to spend money on a game nobody around here wants to play.

Until now! I was reconnecting with an old friend and he's been digging in to Star Wars Legions over the past year and that started some old wheels to turning so I decided to check out the current state of Star Wars spaceship games.

X-Wing is still in its 2nd edition  - current rules etc. are here. FFG was bought out by Asmodee who has moved all of the miniature games over to a different sub-company Atomic Mass Games who do the Marvel game and the various Star Wars miniatures games, including X-Wing. That's all fine as long as they keep making it and right now it looks like it's mostly been in a holding pattern - continuing production of the existing line without much new. That's also fine and word is that some new stuff from The Mandalorian should be coming along any time now so they are looking to the future. 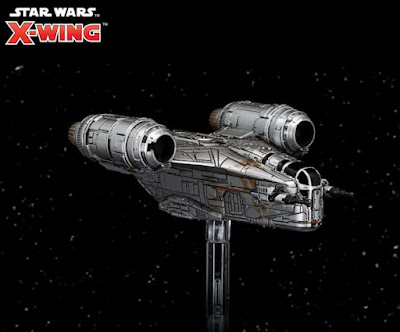 For the present I was aware there was a conversion kit for 2.0 for each faction back when it released. I did take a look at them and they seemed pretty pricey at the time for a game we were not playing and that's when I decided to let the game go. Looking around now though I was able to find them for a much more reasonable price and that certainly helped. Also I figured that I only needed the rebel and the empire sets as the other factions have flown off as some of the apprentices have moved on. The other upside was that they come with updates for ships I do not have and many 1st edition ships are fairly inexpensive online making future expansion of the squadrons fairly easy.

So I ordered the two conversion sets and a few more ships and that first picture up top is the current state of things. I have a ridiculous pile of cards and cardboard so I also added some binders to hold the cards at least. I'm still looking at options for the ship tokens and the rest. I'm also looking over the X-Wing app which is where all the points are now kept instead of on the cards. I've heard mixed things about it but I'm going to give it a try. And no, I haven't played it yet - this is all getting it into shape and ready to play and I expect we will get a game in fairly soon.

After re-acquainting myself with the game I'd say it still has the 3 big advantages I noted years ago:

So I'm pretty happy to be opening up the hangar again. I hate having whole sets of painted mini's sitting around gathering dust for years so it feels good to shake that off. I'll post more once we have a game or three under our belts.