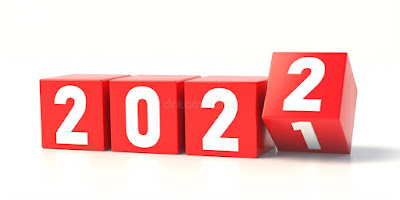 It's a little strange -  I haven't done one of these new year type posts in a few years and I think my approach has shifted.  I don't feel any real urgency with the goals this year as far as must-do or must-have type things. I'm fairly happy with where a lot of things are right now and I'm guessing that has a lot to do with it.

For example EN World has a Most-Anticipated RPG list every year and there are usually a few entries that have my attention but this year ... man there is nothing there that grabs me. Partly because of subjects, partly because of systems, and also because for some of them I can think of how I could run them in existing games without much trouble. D&D 5th is still rolling along as is PF2. Star Wars and Star Trek both have well-supported games. Superheroes are well-covered too. That new Marvel game scheduled for March is really the only thing on the horizon I am sort of excited about but even there it's very much a wait and see kind of feeling rather than thinking up a new campaign. 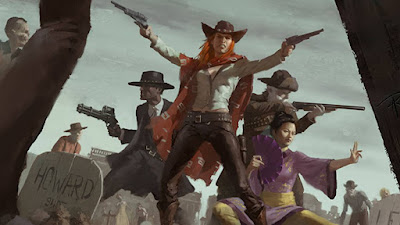 RPG-wise I expect to keep running Deadlands for the near future, hopefully to the conclusion of this particular campaign. I like the system and the setting, my players seem to as well, and for a published campaign it's pretty open and flexible. Pinnacle's plot point approach works pretty well for me.

When that eventually wraps up we will have some decisions to make. I usually like to change things up and I've been talking up ToEE for 5th edition as our next game but you never know. I'd say Savage Rifts is a strong candidate as well. I'd still like to do at least a short run with some version of Star Wars but we will see. The ever-burning hope of an ongoing supers campaign is still around but I suspect some of these options will have to wait until I feel like I can run a second game alongside a main campaign. I've done it before but this past year or two has worked best with one campaign going that everyone can plan around. FOCUS! Do not split the player-party!

I haven't played an RPG in a while and that's something I miss. Paladin Steve's years-long Pathfinder  campaign ended in late 2019 and Variable Dave's 50 Fathoms campaign was blocked by quarantine in 2020. he eventually started running it online but I just do not like the online option and they eventually wrapped it up last summer. There has been talk of starting up something new but nothing has happened yet. Maybe this year will see a re-kindling. 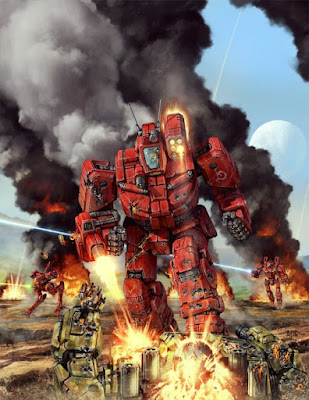 Battletech was a surprise end of year option and we have one kiddo at least very much interested so that might become a thing this year. I'm not sure if it will stay a board/minis option or if it might erupt into the RPG side too but it would be fun after this long to actually spend some time with it. It's not like I really need to buy or build or paint anything for it so it's an easy option.

On the miniatures front 40K will stay the big dog. First goal is to finish the Necrons, then the Blood Angels and then we will see. Maybe Eldar, maybe Chaos ... plus there is always power armor work to do too. Not sure I will do a new army this year.  The robots were a unique situation being in the starter sets and all. The Tyranids are the only other army I don't have that really tempt me these days but I don't feel they're a must-have yet. The other likely candidate is the Custodes because hey, you only need about 20 models to make an army.

I've had a weird urge lately to go retro. We know there's a reborn old-school Warhammer coming some day and I'm tempted to start building an old-school army to go with it. I still have my Chaos Warriors but all that stuff sitting half-done for Kings of War would look good on individual bases. Dwarves are also an inclination as I've never built a fantasy dwarf army in any game ... also Empire and all their crazy variety ... and Dark Elves for some reason. Not sure where this will go. It's not an urgent feeling but more of a "hey I could get a unit here and a unit there and have something ready to go whenever the new rules arrive."

So yes, this year feels way more casual than many in the past - laid back if you will. No hard schedule or agenda, just knowing what I'm doing now with a rough outline for later. The last couple of years have shown me that hard plans for 6+ months are likely to be disrupted so keep them loose. Worry about the now thing and maybe the next thing and leave the rest flexible.