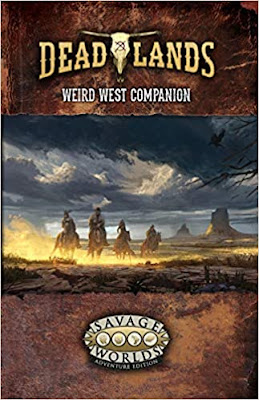 We open with a two-page spread that covers the publication history of the Deadlands game. I like this and I think more long-lived RPG's should include this kind of thing.

Then we get to player stuff - more powers for harrowed, U.S. Marshals, metal mages (mad scientists who have become aware that their devices are working because of magic), voodooists (new arcane background),  and witches. It's all nice to have and brings some character types from earlier editions up to date but honestly I've never had anyone play any of those last 3 so this is probably the kind of book they belong in.

Next up is a chapter on Relics and this, surprisingly, is almost the longest chapter in the book! Deadlands doesn't do magic items the way D&D does but they do exist in the setting. They tend to be one-off, unique items tied to a person or event. So-and-so's pistols ... famous outlaw's boots ... somebody's coup stick - this is the kind of magic item in this section. There is typically a paragraph or two of background, a note on what power it holds, and a note on any taint it holds - yes, some of them have downsides. I've never thought of this as an item-focused game but if your players have some interest it could be fun and it does let a GM tie things in to some of the legends of the setting in a direct way. 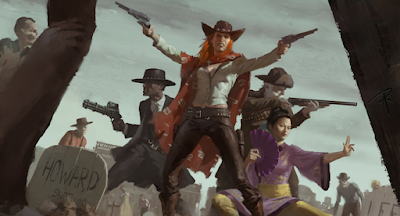 One thing I was surprised to see is an entire chapter that breaks down what happened in each of the four servitor campaigns. Now this was covered in a big-picture way in the main rulebook but here they have decided to give a summary of what happened and then they go into a rather lengthy breakdown of every core plot point in each of the four campaign books. I was really scratching my head at this as I don't know why anyone would need this level of detail if they are not running those campaigns! They are still available on DTRPG so one could certainly acquire and run them without much difficulty. It's sort of a timeline of the last 5 years of the setting but we already get a broader timeline and breakdown in the main book so this adds ... what? It's not wrong it's just a weird duplication of effort that has me wondering what the benefit is supposed to be.

There is a nice chapter on the hunting grounds which could be *extremely* useful depending on where your campaign takes you. It's similar to notes on planar travel in a D&D game: you may not need it early in your game and you may only need it once in a campaign but it's really handy to have if your game goes there. This section covers what it looks like, what lives there, how things work, and even includes some ideas on adventures that involve the hunting grounds.

The next-to-last chapter has stats for NPCs both historical (Wyatt Earp, Seth Bullock) and Deadlands - specific (Ronan Lynch, Lacy O'Malley). This is handy stuff when you're running a game as if you want a more personalized statblock for your town marshal then maybe you clone Bat Masterson instead of using the generic law dog stats. This is all specific people - no generic stats or monsters here.

The last section is an old adventure from Shadis magazine (KODT! Joe Genero!) that hasn't been republished since then and it reads decently enough. It has some nice ties to other parts of the setting so I'd say it's worth working in.

Overall for me this book is director's cut material. There's nothing here you need to run a Deadlands campaign but if you're digging in and having a good time there are things in here that could be useful. I'd say the NPC's, the relics, and the hunting grounds chapters are all good examples of "expansion" type material. I would still say you want the main book first, some dice and cards and bennies, a GM screen if you like them, maybe an adventure ... then consider getting this book.