Greatest Hits #16 - 40K Friday: A Personal Look Back at Past Editions

A nice trip back down memory lane - appropriate for the end of the year I think.


On the literal eve of a new edition, I thought I would meander back through some of the older editions since I was there when they came out too. It's funny how I can tie each one to a certain period of my life.

Rogue Trader came out in 1987. Leading up to it was a series of ads in Dragon that had a look unlike anything else at the time:


Now I already had Warhammer Fantasy, and played it some using the counters from Battlesystem, so I knew what Warhammer was and who Citadel/Games Workshop was, but the biggest sci-fi game at the time was the newly exploding Battletech. This looked completely different, and the background was the complete opposite of genre-defining things like Star Trek and Star Wars. Orks! In space! With guns! Power armor! Plus it was a full-on miniatures game, not an RPG or a boardgame that happened to use miniatures - there was no hexmap in sight!

This hit me, and a lot of other people, in exactly the right spot. I was interested but it was a few months before I got into it so it was 1988 before my Eldar took the field for the first time, followed closely by some space marines. By late 1988 it was showing up at most local cons 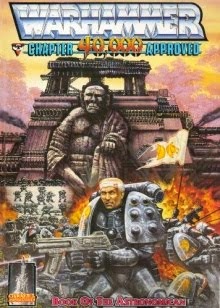 Another big win: having a job (a high school/college job) I found the miniatures were not terribly expensive. We used to get around 5 metal guys in a blister for $5.99, or a box of 30+ plastic guys for around $20. Dreadnoughts were metal and about ten bucks. It was sort of like magic is now - I could afford to buy a couple of packs when I got paid, or wait and get a big box. The game also took fewer miniatures then than it does now. A squad or two, a dreadnought, a couple of characters, maybe a support gun or a speeder or a bike, and you had plenty.

There were constant updates in White Dwarf adding things like Terminators, Chaplains, Ogryn, Rough Riders, and Harlequins. After a couple of years those started to get complied into supplements.

Over the next few years most of the foundations of the game were laid - Eldar and their Aspect Warriors, the Chaos gods, the Ork clans, squats, the different marine chapters, and the components of the imperial guard. I was running Eldar and marines all through this, including a Harlequin army. Yes, it was once possible to have an "army" of about 20 figures, and they were pretty nasty. This was my college game and I have a lot of fond memories of it. 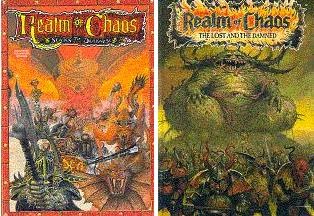 This stuff started to get a little clunky with all of the different books (some of them pretty bulky) and so in 1993 we got the Second Edition with the first big box o' stuff. It was time for an update and consolidation but we lost some of the more random elements of the game. I don't remember anyone in our group not liking it. In fact I remember a lot of new people joining in, including friends who had passed on the prior edition, maybe because it had too many books.


This, along with Space Marine - the epic scale game in the same setting - was my post-college game. I had a real job, my own place, a couple of good FLGS that had playing areas - we played it a lot. I stayed with the Eldar, expanded my Howling Griffon marines, and added in some Orks and Chaos for good measure. Those Orks and Gretchin from this box (and with about 4 more boxes worth of boyz) still form a part of my Ork army today. My Griffs are mostly RT models, my Eldar were a mix of RT and 2nd, but the bulk of my Orks are from this era.

This was still a fun time. The first codexes came out, White Dwarf was still going strong supporting the game with new units and experimental rules, and even though it was a lot more "corporate" there was still a ton of the do-it-yourself spirit there when it came to conversions, units without official models, and terrain. Other than the occasional card building everything we played on, from ruins to forests, was home made. This was my biggest period of playing-with-strangers-at-the-game-store and we all had a lot of fun. There were some crazy situations back then and I wish we had all had camera phones so I would have some pictures to share with you.

Towards the end of the 90's the game wasn't as over-expanded as the prior edition but it was somewhat chaotic and favored big powerful heroes over rank and file and the mechanics had piled up in a way that was sort of like the second edition of D&D - even though you cleaned it up there are still a lot of underlying assumptions that mean it plays a certain way. So in 1998 we got 3rd edition. 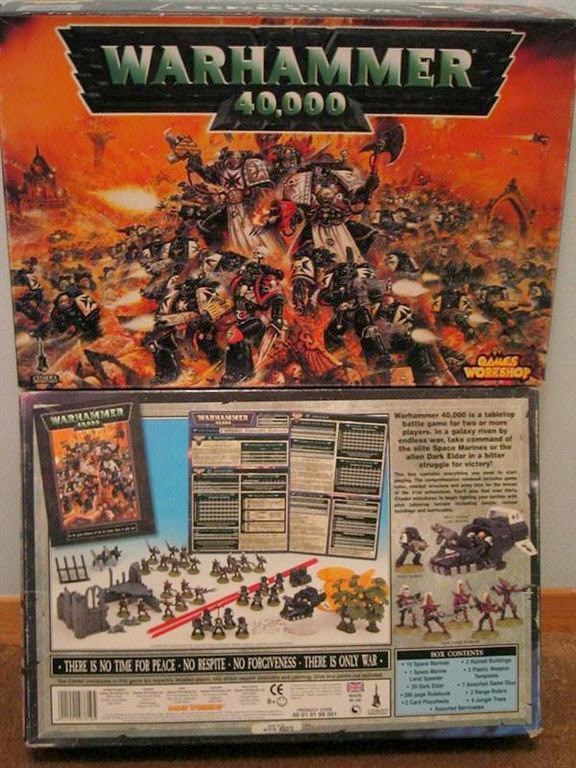 This was a total revamp of the game. I remember getting the box and sitting down with the rules and being almost shocked - I know the people I played with had been hoping for a change but this was massive. Fortunately it came with army lists built right in to the main rulebook so we didn't have to wait for codex revamps as the old ones were just completely not compatible with these rules. As much flak as GW takes sometimes they did this one right. This is the game I was playing when I started having kids, so game time and paint time dropped precipitously during this edition.

With a sense of renewal a lot of us jumped back in. Late in 2nd edition I had started building a new marine army with a simpler paint scheme to get things done faster. For the new edition they became a major force in my games and my 3rd edition box marines are still the core of my Crimson Fist tactical squads. I never liked the Dark Eldar (introduced here) very much but my old figures are sitting in my wife's DE battalion box awaiting assembly.

As we played quite a bit early on in 3rd edition I decided to consolidate my armies. My chaos force, much of my eldar, and my budding imperial guard army were traded away for Orks. I built up a pretty nasty Ork force, though it was still mostly 2E era models, and I've been playing them ever since. I experimented with "dipping" my orks, again going for speed-to-tabletop. 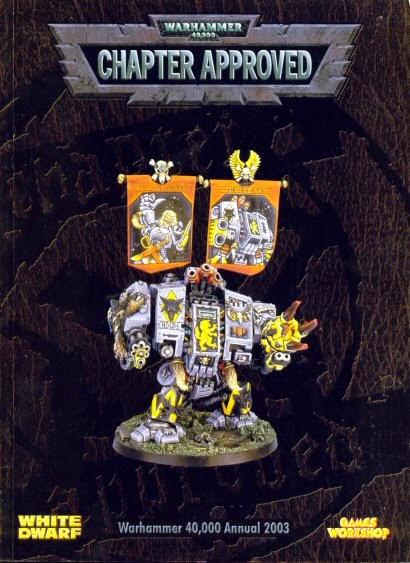 White Dwarf was still good during this time putting out a lot of articles on terrain and a lot of special units and experimental rules. It was a total revamp so there was a lot to discuss. These generated an annual "rules update" that was pretty much required to keep up, on top of the new wave of codexes.

Also notable for me was that right before this edition a completely new version of Epic came out that killed the game for me, then Battlefleet Gothic came out a few years later which I really liked but could never get anyone else to get into. This meant that 40K was "the" game for a few years.

This is also the edition that was current while I was busy getting a divorce, which meant I was not doing much with it by the end. Late 3rd edition was not nearly as much fun as the beginning. 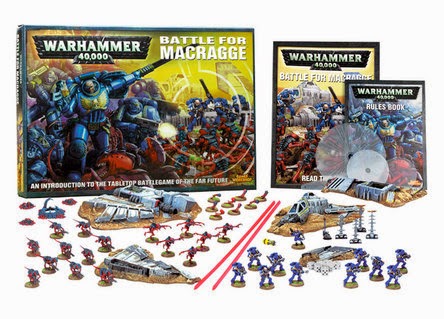 The next edition was the "lost edition" for me. I was not very active with 40K when it started, epic was gone (as far as I was concerned) BFG was not a big thing anymore, and I just was not that interested in anything GW was putting out. I played all of two or three games of this one. I never bought the boxed set, and only bought the rulebook late and on the cheap when I was thinking about getting back in. I was busy with other things.

Fifth edition was the renewal - within the first year of its release I was married and had picked up a couple of new apprentices and decided the time was right to introduce all of the boys to the game. To make up for missing 4th I bought two of these sets (for the older Apprentices) and fortunately it was a really good starter set. They swapped halves and the parts from each form the core of Blaster's Space Wolves and Red's Evil Sunz. This was their introduction to the game and piqued my interest enough to dive back in full-force, rebuilding old armies and building up new ones.

During this I dusted off the Griffons once again, reforged the Fists into a more normal marine army than the cutting-edge-of-3rd-edition they had been, acquired an entire Deathwing army in a confluence of interest and finances, added vehicles to my previously foot-slogging ork horde, and in general liked playing the game again. I was still having a lot of fun with 5th when word came that we were getting 6th ... 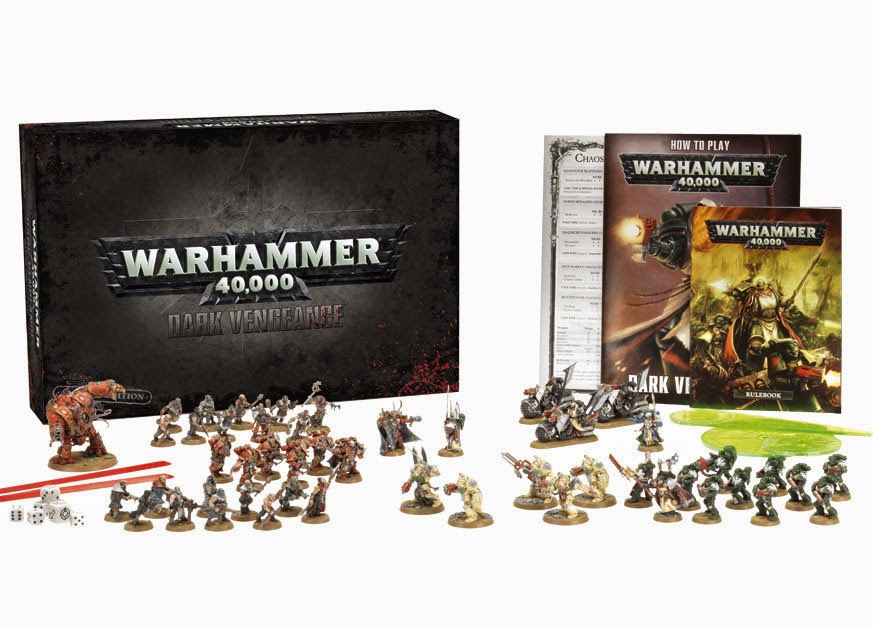 In the two years since it came out we've played as much or more 6th then we did 5th, which is pretty good. This time I only picked up one boxed set since it didn't really fit with the armies the Apprentices were running. They did get the big hardback rulebooks for this one though and they have been well-read. We've mostly ignored flyers and allies, the two biggest additions to this edition, but they've cropped up a few times. I put together enough mini's to field a Chaos Marine army and decided 3 loyalist marine forces weren't enough so I built up a Dark Angels force too - not the smartest move but why not have a marine army from (almost) every edition?

Red was in a local store league for a while and got to play against more than just family and learned a lot. He added a Necron army during this time while Blaster added Eldar. I think two armies is enough for them to manage so we're not in a hurry to add any more, and having them does make Christmas and birthdays a little easier to shop for in a pinch. Watching the kid open a well-painted Logan Grimnar feels pretty good - it's fun to make them lose their mind over something you know they're really going to like.

Apprentice Red will be done with high school in a little more than a week, so presumably this will be his "college edition". For Blaster it will be his main "high school" edition, and for Who it will be the first one he really digs into as he got his first starter mini's for Christmas a few months ago. I think it is a little ridiculous to be doing a new edition this quickly, but I'm going to roll with it. I'll be going to pick up a copy tomorrow so amid all of our end of year proms, banquets, concerts, and graduations I'll be reading up for the next round. It should make for a fun summer.
Posted by Blacksteel at 12:00 PM