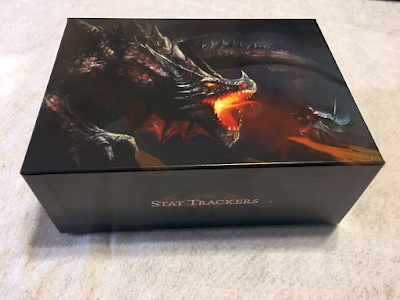 In a lot of RPG's it's important to track initiative and there are a lot of ways to do it from pen & paper to mag-boards to computer tools. I've used a variety of methods over the years but when we started playing 5E I went with the fairly popular "hanging cards over the top of the DM screen in order" approach. It's simple, inexpensive, and requires no hardware other than a DM screen, which I already had.

Then some guys ran a kickstarter for an improved version of everybody's homebrew solution: trackers pre-printed with monster stats! Now there were form-style printable sheets sort of like this available but for even less prep these are pre-printed which means I don't have to go through and transcribe the Monster Manual - instead I have a 300+ of these things ready to go. For roughly the cost of a 5E book I have all of that plus a bunch of blank monster trackers I can use for IP-restricted monsters and homebrews. I also have a bunch of blank character trackers so I can keep my PCs' stats available too if I so desire. Honestly I almost never track my PC stats in any game - that's their job, not mine - but I may give it a try since these make it so easy. Here's what it looks like in action: 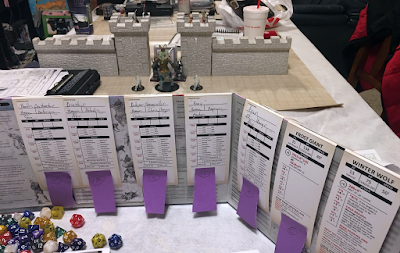 The purple sticky notes are where I'm recording the actual initiative number. I'm not sure this is really something I need to do anymore as there aren't really ways to change it once it's rolled - just ways to shift who goes before who. It's a holdover habit from older editions and maybe this tool will help me let go of it.

As the frost giants were beating down the gate to Bryn Shander I had their stats right there in front of me and I DID NOT HAVE TO OPEN A SINGLE BOOK TO RUN THIS ENTIRE FIGHT!

That's huge. I had the adventure in front of me, but it basically sets up the scene, the goals, and the aftermath. I did not have to look up anything specific to the fight itself and could focus almost entirely on what's going on and not what the numbers are.

This is exactly what I'm looking for when running a game.

For 4E and for previous 5E runs I would typically put together the monster stats I knew would be appearing and print them out on individual sheets. This saved me from using books or flipping through adventures or using a laptop for stats. This tool is a step beyond because I still needed to track initiative separately from those sheets and this accomplishes both with one item and leaves one less thing to clutter up my table space.

I'm very happy with this product. 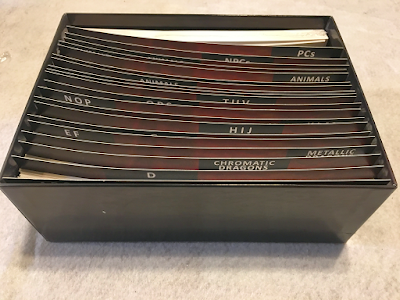 One other note: Part of what makes this possible is the simplification of the statblocks for 5E. I think it would also have been possible for 4E as those were similarly clean. There's no way this would work as well for Pathfinder because a lot of the bigger and more advanced monsters have extremely long statblocks, sometimes a page or more for the heavy hitters. It's a good example of an unanticipated benefit to simplifying things where it makes sense.

Solutions to potential future issues: Say I want to run multiple frost giants on individual initiative but I only have the one card? Photocopy the tracker, add a colored post it or sticker dot that corresponds to a colored dot on each individual frost giant mini.

If you're interested they are now "Top Dog Games" and have a website here where you can order them. I don't know them personally or have any involvement with them - I just like what they've done.
Posted by Blacksteel at 12:00 PM