Something New for Monday - DCC/MCC Scratch Off Character Sheets 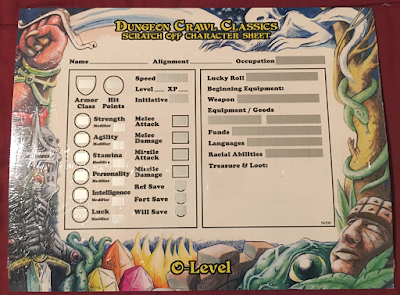 As some of you probably know, the Dungeon Crawl Classics RPG is a D&D type game that starts characters out a zero level as a standard assumption. Specifically, it starts each player out with 4 or so zero-level characters and pushes them into zero-level adventures where it's assumed a winnowing process takes place and you emerge with some 1st level characters from the carnage.

The characters are 100% random creation from ability scores to background to gear. It's up to the player to give them a name and personality but the mechanical details are rolled. It's the absolute epitome of "develop in play" over "pages and pages of written background" and the interaction of the players as the adventure progresses is just flat-out amazing. Who leads? Who cowers at the back? Who's just trying to collect loot? Just one or two sessions gives you a gold mine of character history, tendencies, and overall personality.

Even as a huge fan of this approach it can take a little time to put together 20 characters - enter the scratch-off zero level character sheet! Now if I'm feeling some time pressure I can hand these out and say "go" and in a few minutes we will have our party and be ready to go!

The same system is present in the new Mutant Crawl Classics and they created scratch offs for those as well: 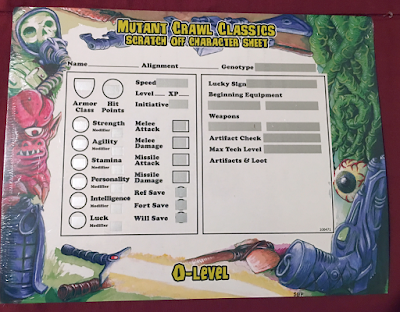 These also help in another scenario even if you prefer to let everyone roll their zeroes the original way: replacement characters! Assuming reinforcements are needed or a new player joins in you may not want to slow down the session to supervise someone rolling up a new PC or three - instead, just hand them a card and in a minute or two they are ready to run!

I think it's a genius idea. No, it wouldn't work with every RPG out there it works really well with this one and is one more tool to reinforce the flavor of this game.
Posted by Blacksteel at 6:55 PM