Day 17: Which RPG have you owned the longest but not played? 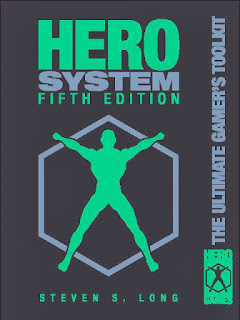 I had to do a lot of thinking while standing in the main "library" room to answer this.

If we start counting different editions as different games then it's probably Hero 5th edition. It came out in 2002, I bought it that year, and I've never run it or played it with anyone. That's 15 years and that's a pretty long dry spell for me.

I've never run Aces and Eights and that came out in 2007 so that's ten years.

Underground is in this discussion too. It came out in 1993, I've owned a copy since around that time, and I think we made characters for it once but never had another session where we actually ran.

Hackmaster is in a similar situation: Had it since around 2001 but never ran it. We played around with making characters but never had an actual run and we were so wrapped up in 3E D&D at that time that it was never going to get serious attention.

If you don't count character creation as "playing" then those two would bump Hero 5 down to third place.

There are some other games that have been out longer that I have not played but I did not pick them up until later. I have a pretty decent collection of RPG's but unlike a lot of collectors I usually pick up stuff with the intent to play, not just store it on a shelf. Now I may have only run them once, but the vast majority of the games I own have been played at some point.

That said I own a fair number of RPG's I haven't run or played in 20+ years. I may have played them a ton in the 80's or 90's but for whatever reason I haven't touched them in the 2000's. They may have been superseded by later editions, no one else is interested in playing them, or tastes may just have changed but they still have some value to me and so they remain.
Posted by Blacksteel at 12:00 PM