Despite losing badly in terms of card-based VP's last time I felt like I was finally figuring out how to use the Blood Angels on the table. With 2000 points to play with this time I had some new ideas I wanted to try out - let's talk about the list:

This is a Baal Strike Force - it means they get the Red Thirst rule which is a +1 initiative on the charge and can take 4 Elite choice, vs. the 3 of a normal Combined Arms Detachment. Most of their units have Furious Charge (+1 Strength on the charge) as a standard thing anyway. Swinging with a Strength of 5 at an initiative 5 means they go before most armies and hit harder than most as well so melee is definitely a place they want to be.

I really like Mephiston and had fun with him last game so I brought him in again. He will once again be riding the drop pod express. He has a bodyguard upgrade this time - more on that below.

I decided to double-down on psykers by bringing in a generic level 2 librarian. I wanted someone to accompany one of my Death Company squads so I gave him a jump pack. The priest had worked alright last game but the DC already has the Feel No Pain special rule which is the Priest's main benefit, so he doesn't add much to that unit. A psyker on the other hand adds a variety of useful buff powers so he made more sense this time.

Troops
I caved here. I've always been a "full 10-man squad" guy when it comes to tactical marines, from my original Howling Griffons (20 tac marines in two squads) back in Rogue Trader through my Crimson Fists (30 in 3 squads) to even my chaos marines (30 in 3 for my Iron Warriors too). It's a new age though and for the BA's tac marines are just not where the action is. All of the marine forces have formations now that reward taking multiple tactical squads in some way but none of them require full-strength versions. These typically require 3-6 of these squads so the incentive is to take minimum size units to get the bonus then spend your points elsewhere. The current BA version of this formation is nothing special but the Baal Strike Force is hungry for points for those 4 Elite choices. For this fight I went with the two minimum sized squads with a heavy weapon each. They can park on an objective or in cover and maybe contribute in some way.

Elites
This is a big chunk of the "hammer" part of the army. Two units of Death Company this time, both accompanied by a heavy-hitter. Jump packs give them speed, plus they are fearless and have Feel No Pain and 5 attacks each on the charge ... yeah.

The always-good dread in a drop pod to clear a squad out of cover with triple templates. I expect one of these will be in pretty much every list I take from now on.

The biggest change here is the Sternguard. You don't hear a ton about them in most Blood Angels lists but they are in the book. They're legendary for being a drop-melta squad but they have uses beyond that. Their Special Issue Ammo makes them good against anything in the game. Being able to take a combi-weapon is a nice option, but being able to bring heavy flamers is good too. Their 2 attacks (along with all of the other BA boosts) means they can do some harm in assault as well. I think they have a lot of potential, and Mephiston will only make them better.

Fast Attack
This is the rest of the "hammer" of the army. Despite their inability to kill the land raider last time, I still like the drop-melta squad. That can't happen every time, right? They are a much bigger threat than the classic multi-melta dread in a drop pod and give me 4 melta shots instead of just one. I think they're a must-take.

The bikes have been reshuffled this time. Instead of one bigger squad (with fewer guns) I've split them into two squads and added multi-melta bikes as reinforcements. This makes them really nasty against heavy infantry and vehicles both. It's a little tempting to gear up those sergeants - make him a veteran, give him a power sword, and charge them into something since they are such a mobile unit but  I really want them to shoot things, not charge things, so I'm keeping him bare bones other than the grav weapon.

None! No devastators! No predators! No land raiders! This is unusual for me but I am learning. 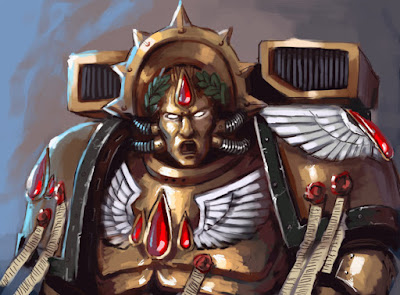 A chapter master leading a unit of death company - yeah! It might be overkill but he is a beast in melee and so are they so they should work well together. I've had a nicely painted mini of this guy for two years now and never gotten the chance to use him. With artificer armor, an iron halo, and Eternal Warrior he's not going down easy, and with Hit and Run he and his boys can go find another party if they get bored in any particular fight.

The plan
The tac squads, the bikes, and the DC all start on the board, with 3 drop pods waiting in reserve.

The Fight
Blaster took most of usual faves - Blood claws + wolf priest in a land raider crusader, long fangs, couple of grey hunter squads, and this time he also added a pair of dreadnoughts. He also brought Logan Grimnar, chapter master of the Space Wolves, so there was a chance we could have two chapter masters going toe to toe in this fight.

I went second. I forgot to grab a pre-game pic of the field so we will open with the end of Turn 1: 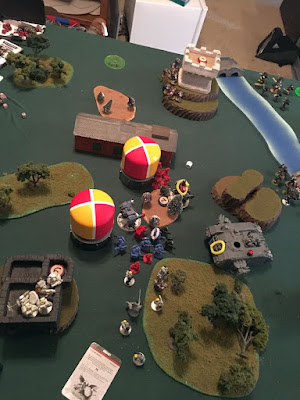 You can see we already have a pretty good fight going on here. 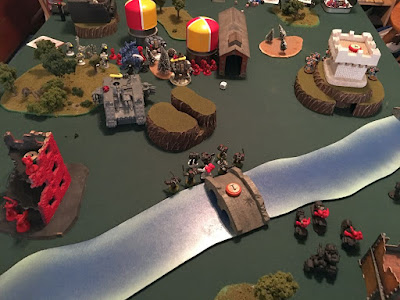 Here's another view of Turn 1 - one of my tac squads is in that red ruin at the left getting blasted by his long fangs. the other is out of frame in the woods at the middle of the bottom there. 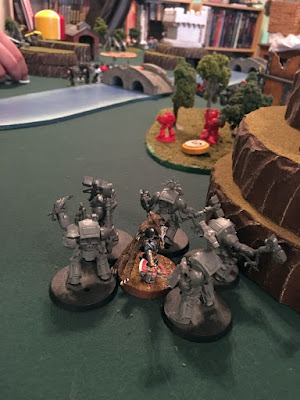 At the back of the field Logan Grimnar and his Thunder Hammer Storm Shield wolf guard terminators deep strike in. 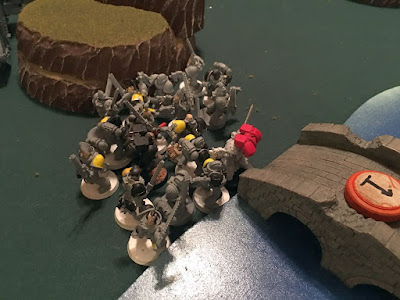 The inevitable swarm of blood claws gets the jump on my death company. My guys are not quite as strong when they don't get the charge so this is bad - my guys eventually go down under the weight of attacks here. 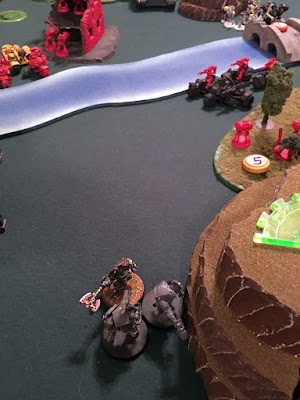 Both grav bike squadrons find themselves within range of Logan's squad. Zap zap! 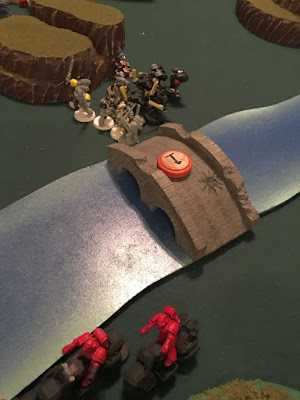 Dante and the other death company leap in to the claws, determined to avenge their brothers.

The grand melee: In the center the long fangs blast the sternguard and blow several away. The plasma cannon dread torches the drop-melta squad who break and run. The grey hunters shoot more sternguard. The Blood Angels return the favor and finish them off. 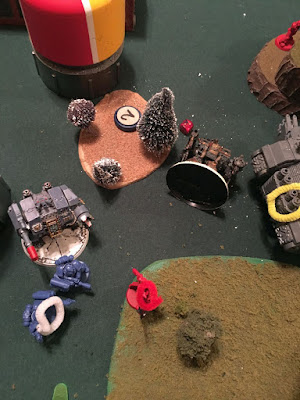 On Turn 3 the plasma dread charges Mephiston who points his trusty plasma pistol that way and ZAP! The dread goes down to an incredible overwatch shot that hits and glances, taking off his last hull point, dropping the armored wolf in his tracks! 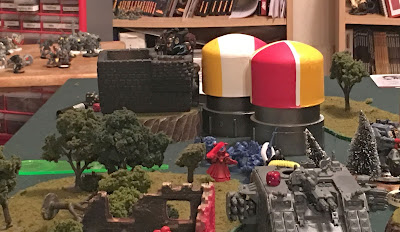 The Furioso drops in with a goal of eliminating the long fangs. He drops in, moves up into the building, and BLAM BLAM WHOSH ... the long fangs are gone! Exactly as planned! 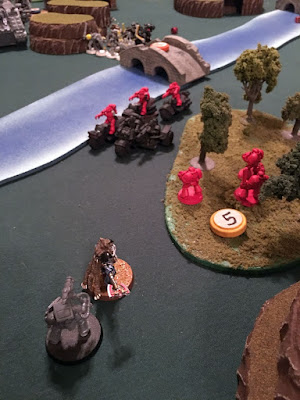 Logan's damaged squad blasts the tac marines in a desperate attempt to claim objective 5, then fails its charge. The tac squad kills one more terminator as the bikes close in. 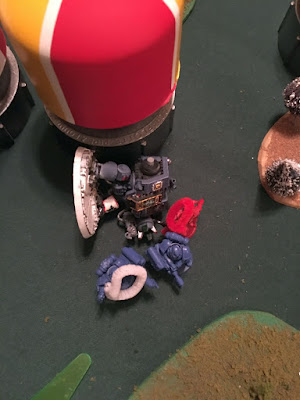 On the BA turn Mephiston charges in and destroys the remaining wolf dread with his red lightsaber and Blaster concedes!

The VP total was only 4-2 but I was about to score Slay the Warlord and he didn't have much left on the table.
Thoughts:
I'll have more thoughts in the next post wrapping up the whole series and also what I'm going to do with the army next.