Finally! I finished up the wraithknight yesterday and managed to get the stretch goal of the dark reapers (all 3 squads) finished too. I had finished the spiritseer and the cannon battery the day before. Extra extra bonus achievements were getting the second gun painted and put on the metal wraithlord and getting some snow on the bases for one of the dire avenger squads.

Overall it was an incredibly productive 4-day run. I painted up to the point of completion 26 models and touched up or added to another 12 for 38 models finished to a standard I think is table-ready to good. It's been a long time since I knocked out that many mini's. If you go back and in the rest of the wraith host I built and painted from scratch 42 Eldar models this year, along with 30+ Iron Warriors. That's a pretty good year. I do tend to paint in bursts like this around holidays and time off so one of my goals for 2017 is to even that out and make some progress every week.

Effectively the painted part of this army is some combination of wraith host, aspect host, dire avenger shrine, and a combined arms detachment - depending on points available and how I want to play it. There's more than enough stuff here to play with at over 3000 points so I am very happy with the current state of things.

All that said it's not yet finished. There are 30+ guardians sitting on the table along with the associated heavy weapons and warlocks, a wraithlord, 3 war walkers, 3 vypers, and another farseer - enough to build the big guardian host formation and really put this over the top. I have two unpainted wave serpents too. There are two squads of swooping hawks in the queue as well. Those may be at the top of the list before I dive into another massive batch of yellow. 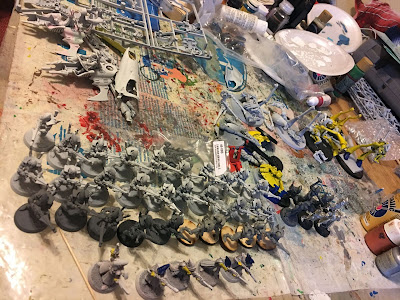 Things it doesn't have:

So for 2017 I expect to be playing them more and painting them less. The goal of the focus last year was to get a painted, playable army together and I have pulled that off. Now I can add a unit here and a unit there as time allows while having fun playing it more. It's been a long time since I've had a "finished" eldar army and I am really looking forward to using it. Here's to 2017!
Posted by Blacksteel at 12:00 PM