How Many Games is Enough?

Barking Alien had a great post last week about how he really doesn't need more games. He likes new games, but that's different than needing them. I'm pretty much in the same ballpark. A current example: 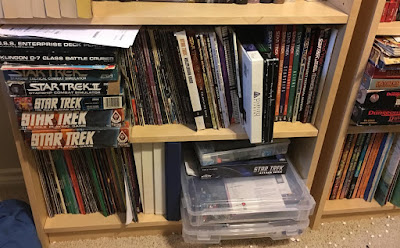 If I want to run a Star Trek game I have -


So there are at least 5 different ways to play a Trek RPG. Now we have Modiphius' new "double d20, all-era's, full support promised" line of Trek RPG goodness promised for 2017. I'm digging through the playtest rules and while I don't hate it I do start to wonder how much I need another Trek game. Granted, most of the other options are over a decade old but there hasn't been much new development in the Trek universe in that decade. The Abrams movies, sure, but those could be run with the old systems pretty easily.

If I liked d6 Star Wars, I was good through the 90's but once the prequels started coming out there was a lot of new stuff to address in the game. If you like "official" stats for your powers and vehicles and gear then it was tough, so there was a fairly solid reason to look into a new system.

Trek is really not in that position.

Superhero games are in a similar place. I have around 3 different systems each for DC and Marvel alone. Throw in multiple editions of Champions and M&M, old school classics like V&V, new school options like ICONS, Bash, and Supers, plus GURPS, various FATE kits, and Apocalypse World Engine books, well, there are a ton of ways to put on a cape. This is a fairly niche type of game even within the niche of RPG games! D&D type games are the same way, and even general sci-fi games are all over the place these days.

I'd say there are at least 3 ways to play any genre of RPG you want. How many ways do you need?

That said I am not declaring an embargo on RPG's here. I like to see what's new. I like to see if someone has come up with something truly original. Evan a new spin on a well-known approach can be interesting. I just can't do the "freeze" and run the same game for 20 years. I've seen what that does - it turns you into the guy on the Facebook group that doesn't understand why anyone would play anything but class and level fantasy games.  Or, conversely, the guy who can't understand why anyone would ever play one of those. I have no interest in joining that crowd. So the new RPG's will continue to wander through the front door.

It's a funny observation I'm going to ponder for a while.

Trek did some of that with each new series and some of the movies but rarely was it a complete revamp. Here's one new race and one new ship and the phasers look different for this movie. The TNG set of series would throw in an alien here and there but nothing as radical as "look at these awesome new force powers!" or "Jedi everywhere" or "armies of shooty droids, elite bodyguard droids, droid fighters, droid-dispersing bombs" etc.

Trek has certainly been less of a moving target, especially since Enterprise wrapped up. The humans/klingons/big ships/transporters/phasers/tricorders/do some epxloring/do some fighting mix doesn't change dramatically over time.