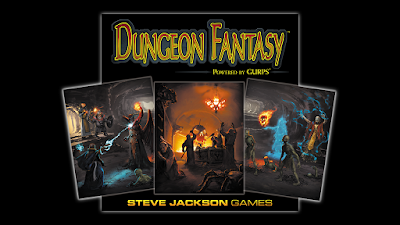 So there's a Kickstarter for GURPS. I shared my experiences with GURPS in a post a few years back and to be honest I haven't added anything new in the six years since I wrote that. It's just not a game my players are interested in playing. I've actually sold off a lot of my books because they gathered dust for ten years and with the Great Internet Attic of eBay I can always go get them again if there's a sudden outcry for GURPS again.

Part of the lack of interest I think is because there have been a lot of new editions and new game systems that have come out, many for specific genres, while GURPS has been pretty much the same thing since 2004 (4th edition) which is really not dramatically different from 3rd edition (1988). So feel comfortable blaming some of the disinterest on Steve Jackson Games (insert smiley here). The 4th edition version of GURPS Traveller was a prequel setting, a lot of the more interesting books and concepts for books from 3rd never made the jump to 4th (Discworld, Myth, Atomic Horror, Rome, Greece, Autoduel) and while 4th involved the usual re-purchasing of the same books you probably owned in 3rd it never really went beyond that for me. They did branch out some with PDFs (full list here) but that was a few years into the new edition and I just was not interested by the time the PDF machine was really rolling.

The other problem with GURPS in the last decade especially is "what is the flagship GURPS game"? It's a great toolkit game for GM's who want to do their own thing but settings are what get attention and keep the interest levels up even when not actively running or playing a game. Of the universal multigenre games Hero has Champions, BRP has RuneQuest and Call of Cthulu, Savage Worlds has Deadlands, GURPS has ... what? For a while it was the alternative system - there was a GURPS version of Vampire, Werewolf, Deadlands, Castle Falkenstein, Conspiracy X, Prime Directive, and of course Traveller. Those are all licensed settings and while that's a totally solid way to go it seems like after 30 years of GURPS there should be a go-to setting for the game, something it's known for that is not a Plan B version of someone else's game.

So GURPS has been around but not really a big part of the RPG scene for the last few years. It's been supported, but not really promoted outside of the existing player base. Now SJG is launching this Kickstarter to re-ignite/gauge interest in the game and I have truly mixed feelings about it.

I'm really glad they're doing a KS for GURPS. It's about time!

I'm disappointed that it's for "Dungeon Fantasy" - the most generic kind of RPG. The kind of RPG I already have at least ten other systems for and so do many other players!  From the site:

Sometimes you want an intricate fantasy setting that encourages roleplaying and characterization – one with lovingly detailed cultures and plots, enabling you to give each hero a past, a family, and a home town. Sometimes you want to use every rule, making the game richer and more realistic . . .

. . . and sometimes you just want to play a combat-monster warrior who stomps monsters and takes their stuff!

Many – perhaps most – gamers started out playing simple dungeon-crawl RPGs or hack n' slash computer games. Some of us still recall that time fondly, but pretend to have "outgrown" it. But if you love the smell of fireballs in the morning, GURPS Dungeon Fantasy is for you.

No - D&D is for you! or Pathfinder! Or Swords and Wizardry! Or Labyrinth Lord! Or Dungeon Crawl Classics! Or any of the other umpteen dozen dungeon crawling RPG's on the market!

GURPS was the game we played when we were tired of dungeon crawling! because D&D was built for that and has always been better for that kind of game!

GURPS is a great game for so many other genres, why did they choose this specific subgenre of fantasy for the "GURPS litmus test kickstarter"? If it fails or just barely funds I suspect we won't see renewed support for GURPS in a big way and that would be a shame. I know fantasy is the big dog in RPG's but its also the most crowded pool and dungeon crawls are the most crowded part of all.

Also, from what I am reading, GURPS DF does not have any particular setting associated with it. It's sort of generic D&D type fantasy without any well-defined world. So there's no setting hook here and  the playstyle is certainly not unique - the pitch is pretty much "play D&D using some of the GURPS rules" and that's a shame. I suppose you could adapt one of the D&D settings over for it but if you;re going to play this style fo fantasy game and set it in a D&D setting why not just play D&D?

So I don't know if I'm going to back it. I kind of want to because it's GURPS and I'd like to see more from them, to see what a new generation of designers could do with the full game.

Sidetrack: Imagine if they had an easy 3rd-party licensing setup like Savage Worlds or Mutants and Masterminds or Pathfinder - we might see a new wave of some pretty cool material come out for the old game. If an announcement of that kind of thing was part of the Kickstarter I'd be at least a little more interested too.

That aside, it's $65 (with shipping) for yet another dungeon crawling game using a different system. Why not put that money into games we're already playing which include several other dungeon crawling type games? Why not build on what I already have instead of starting a new project? Heck, why not go buy a copy of Descent ($60 at Amazon as I write this) and get plastic mini's and cardboard map tiles?

What are the odds it will have support at the level of Pathfinder? D&D? DCC? Based on the track record I'd say it's pretty slim as it's been awhile since SJG really got behind a particular part of the GURPS line and really pushed it. Looking at what's available DF might be the best-supported GURPS sub-line but if the new set covers a lot of the core material, well, there's not a ton left over. Looks like there's all of one published adventure and no real setting material so it's mostly short books on mechanics. Whee.

The other question, if I did back it, is "when are we going to play it"? When are we going to choose this over D&D, Pathfinder, DCC - the usual suspects. What makes this better than those games for dungeon crawling? "But it's GURPS" - well that makes it different but not better. What hook does it have besides "GURPS"? How do I sell it to my players beyond "it's GURPS" because most of them have very little experience with that system and are pretty happy with the last 3 versions of D&D and Pathfinder.

So I don't know - I'm still undecided. Leaning towards "skip it" but undecided. The KS runs for 23 more days. If I do jump in it will probably be late in the run and it will mainly be because I want to see GURPS get another chance at growth and not because I expect to play it much. I'll force a session or three on the Apprentices if nothing else if it goes that way but it will be more about future possibilities than the actual game in the box.
Posted by Blacksteel at 12:00 PM