With the likelihood of some Savage Worlds games in my future I started looking over my cards and bennies and decided it was time to expand my horizons. One of the overlooked fun elements of Savage Worlds is the physical objects that are part of the game - cards for initiative (and occasionally other things) and some kind of tokens for the bennies. I decided early on to have different decks for different games but I've let it slide as our SW playing time has gone down. Recently, though, I've started looking again. 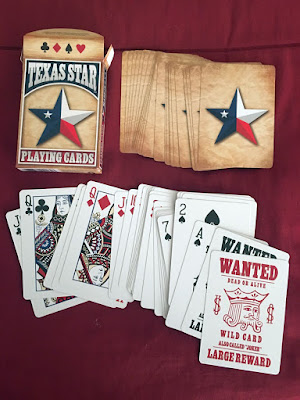 This is really just the backs and the jokers but it looks right at home in a wild west game. Deadlands uses poker chips and a slightly different system for bennies so it all goes together nicely.

For Deadlands Hell on Earth: 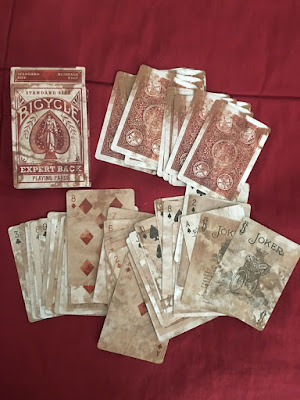 These distressed cards look right at home in a post-apocalyptic game. Top of that list with Savage Worlds is Hell on Earth. They would work well for a Fallout or Savage Twilight 2000 game too. Twilight 2K uses a card-based NPC motivation system so they could be used nicely with the original game in that way too.  I especially like that the effect is front and back, though Lady Blacksteel just looked at them and asked why you would pay money for a deck of cards that look like you just picked them up off of somebody's dirty floor. Not everyone appreciates great ideas... 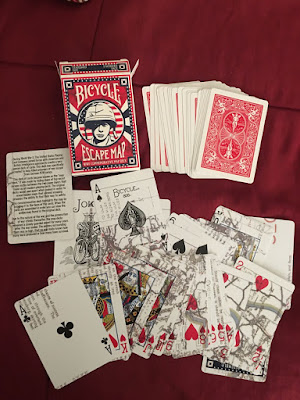 There's a story behind these involving WW2 POWs and smuggled maps on cards which is cool. I also think it's interesting that the backs look like a typical deck of cards but the fronts are the difference here. My main interest is the extra military look which adds to a military game like Weird War 2 or Tour of Darkness. These would work for Twilight 2000 as well. 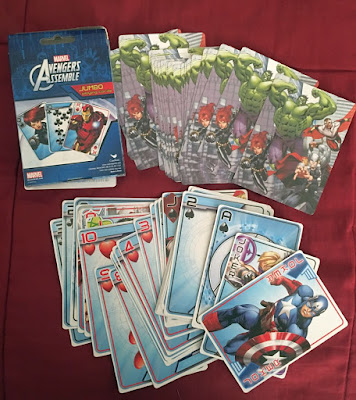 There are a ton of superhero decks out there, villains too. The face cards are all Avengers but the number cards have a nice effect on them too. Plus, they're JUMBO! 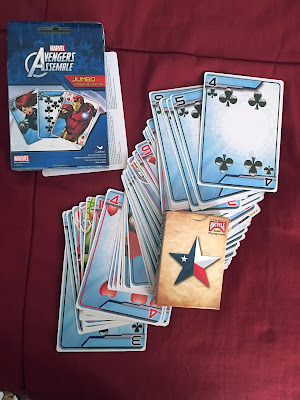 For super types I like to use larger than normal cards. I had a giant deck for Necessary Evil but it wasn't themed. These are about 1/3rd wider and 1/3rd taller than a normal deck - enough that you notice it but not game show sized and awkward to handle at the table. I've been thinking about dusting off some Atomic City Stories for a run in Savage Worlds and these cards would be perfect. For NE I am looking at some other options. 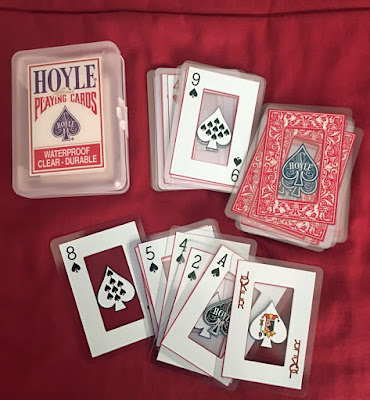 Waterproof cards have been around for a while but if you don't spend time on a boat you may not know about them. They're made of plastic - thinner than a credit card but still with a different feel than normal cards. They also have a silvery, high tech sheen to them when you stack them up. I think they would fit well with Rifts and its heavy tech themes.

I also think they would work well for Star Trek. There are a bunch of Trek decks out there if you want pictures from the shows and movies, but if you want something less series-specific that still looks like it might be from the Trek universe, I think these are a good choice. They're probably good for any science fiction game. 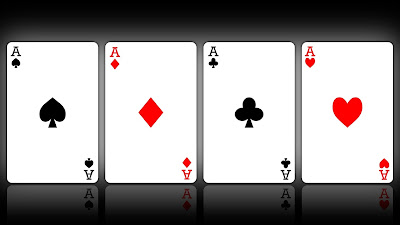 Now none of these are essential for running a game of course, but for a system that has a tactile element to it why not go that extra step and tie it all together. This is one of the cheapest ways to add some flavor to your game. These card decks run around 5 bucks and are all over Amazon and eBay if you can't find some locally. I'm looking at some dice and bennie options as well for certain games to complete the theme - more on that next week.