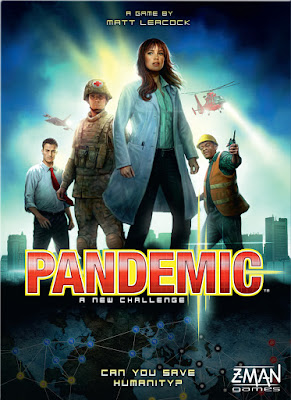 We (finally!) managed to play pandemic for the first time (I know!) over the weekend! I thought it looked like fun and I can now confirm - it is fun! On the surface, to me, a game about fighting diseases sounds pretty dull but remarkably it is not. Lots of exclamation points here but it's a rare thing to find a modern boardgame that adds something new and clever and yet is interesting enough that the whole family gets interested and it becomes a member of our (admittedly very slow) rotation. King of Tokyo did that for us last year and this year it's Pandemic. 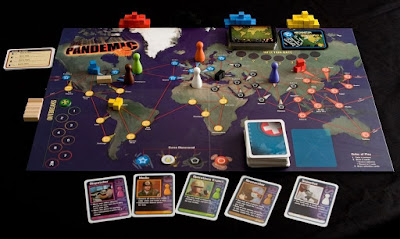 The coolest thing about it is that it's cooperative, so we're playing as a team. That's cool, especially for "family game night". Each player gets a "role" which lets them deviate from the standard rules in some way - typically doing things faster or at a lower cost than other players. There are 8 roles so with 4 players there is a different mix of abilities in every game which changes up how you might tackle the problem. This plus the random nature of the card decks keeps it interesting and it's a lot trickier to come up with a "standard" solution compared to something like Axis and Allies. The roles also make it feel a little like an RPG as you're playing a character to some degree and people do seem to get into it.

I am convinced that this framework could be used in a superhero themed boardgame with the roles being replaced by superhero archetypes, the diseases representing criminal outbreaks or organizations, and research centers being replaced by super-team bases. I need to think about how to add more super-themed options to it but I think it could be done.

If you're wondering about the game there's a good episode of Tabletop that explains it more entertainingly than I can here. Take a look - if you have friends and especially kids it's an interesting option. We failed our first game yet everyone had a good time and agreed that we need to play it more.

Have you played Sentinels of the Multiverse? It's a collaborative "beat the table" supers board/card game with expansions for introducing new heroes. There's not as much collaboration--mostly just pounding on villains.

Pandemic is great fun. I am intrigued by the newish Legacy variant, but I don't play it often enough to get the most out of it. I'm also very tempted by the upcoming Cthulhu variant.

Hi WQR - I have Sentinels sitting on a shelf right now waiting its turn. I know there's a near-infinite number of expansions for it and a computer version of it but I haven't tried any of it yet. Have to get the daughter graduated this weekend and then we may have time to try it out too.

KG - that's my problem with legacy games too. My friends and I played Risk a ton up through high school so we would have loved the Risk Legacy set but nowadays, well, I have about 5 different Risk sets scattered through the house and none of them have been touched in at least 3 years. I'd love to be playing Pandemic enough to use some of the other expansions too but we will have to see.

I have played the dice game variant of Pandemic - "The Cure" - and it was a lot of fun too.

Yes, I've heard good things about The Cure, but I wanted to try the original first; it took my a good couple of years to get around to it, but I'm happy I did!