The FLGS, Part1 - The Old Days 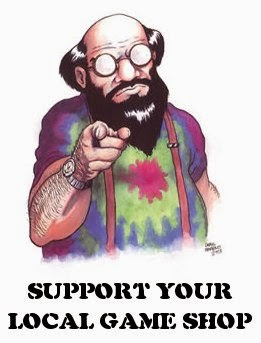 There was a discussion topic  on EN World recently about the future of gaming stores and coming out of that I thought it was worth discussing here. I've seen definite changes since I got into this whole thing and I am curious about where things will go next.

When I started getting interested at the end of the 70's I don't recall any dedicated game stores. There were Hobby Shops, usually located in a mall, and they carried a lot of different things (models, model rockets, RC cars, model trains) including those early D&D books and modules. There were also mall toy stores and they too tended to have a grown-up games isle that included D&D and Avalon Hill titles like Panzerblitz and Squad Leader. You could occasionally find game stuff in other places - I bought my first D&D Basic Set at a Kmart - but it was mainly smaller mall type stores in my experience. During this time I moved from Tennessee to Florida and found the same thing there - toy stores and hobby shops were the main venue for finding new games. I also spent time in San Antonio and we soon moved to D/FW. In the early 80's in Texas this was still mostly the same state of affairs but the new wrinkle was that you could find a lot of TSR products in Toys R Us and Target.

Throughout the 80's the mall hobby shop ("Hobbies for Dad and Lad") was my main FLGS though we did start to see comic book shops popping up (Lone Star Comics, Fantastic Worlds, others) in shopping centers and those started to add a game section too. They were still branded as comic book shops but the game angle kept growing. Local comic/sci-fi/fantasy conventions started adding more game events too and that drew the comic book shops in even more. One big difference vs. today was that I never saw people playing in a store in the early days - you might talk to people and hang out for a while, but nobody was playing in the stores and there wasn't space dedicated to it. There were occasional demo days where a company would bring in someone to show a game in the store, but there were not groups of people playing on their own. I remember Yaquinto bringing in a bunch of games to the hobby shop above and getting a lot of interest, but the big showy stuff and tournaments were left for the conventions. 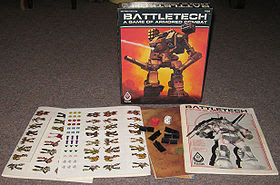 The first game I remember making a splash in local stores was Battletech. It looked like a lot of early anime shows that were getting popular, it was smaller scale but had a lot of visual appeal with stand-up figures (and later miniatures) and the boxed game gave a lot of room to expand by having construction rules in the book. Stores started showing it with demo games in the storeand also started  running tournaments for it at local cons and it was really the first popular "everybody plays that" game that I was aware of, much like X-Wing today.

By the 90's I started to see dedicated game stores opening up (Heroes, Games Plus, Game Chest) and even stores with a more comic book focus (Generation X) started to set aside play space for gamers. In the Time Before Magic this was mainly miniatures games like 40K, Space Marine, Star Fleet Battles, and Battletech. I saw a few RPG's played in a store, but they never seemed to be the bulk of the action. Then in the mid-90's Magic took over, with an assist from Pokemon, and it was card game tournaments, card game new releases, card game expansions, and a lot of the other games were squeezed into a corner or out of the playing space altogether. There might still be a D&D night but it was on a set night when it wouldn't interfere with the new hotness. It makes sense - someone might buy a new D&D book once a month, but kids were in there buying cards damn near every day. I also found that during the 90's most of the mall stores moved out of the malls or just died off, maybe because of the new wave of dedicated game stores.


The turn of the millennium and the release of D&D 3E was when I saw noticeable jump in the number of RPG's being played at stores. Magic had calmed down a bit, miniatures had a steady place in stores once again, and there was enough interest and excitement to set aside some D&D time. Other games started to creep in too but D&D was the one I saw most, maybe because of the organized play efforts with Living Greyhawk.

That's sort of where I see things today - a mix of dedicated game stores and comic book shops, usually in a shopping center, almost all with some playing space, and for most card games (mainly Magic) are the lifeblood product. It's been a fun run, but what does the future hold?
Posted by Blacksteel at 12:00 PM

I think the recent boom in the popularity of board games has led to a rise in game shops and gaming spaces. It's clever marketing; selling games alone isn't going to make it easy to compete with online shops, but provide a comfortable space in which to play, and perhaps even refreshments, and you've got something Amazon can't undercut.

Perhaps it's more striking here in the UK where -- for the most part -- we don't have the space gamers in the US have. Homes are smaller, so being able to go and play in a dedicated space is attractive.

I remember back in the 90's my town had about four places you could get rpg material, discounting the local Games Workshop as they moved out of the general gaming market. One was a dedicated gaming shop, a couple were comic shops that also sold games, and even the Virgin Megastore had an rpg section. Almost all of those disappeared over the years, with one of the comic shops holding on as the only place in town to buy games, until last year when we got a new dedicated gaming shop, complete with a large gaming space and cafe.

I must've been lucky - not only was there a dedicated wargames/RPG store in the town I grew up in (Fairport, NY) back in 1976, I played in my very first game of brown-book D&D there one afternoon.

Kelvin - you rushed ahead! Part 2 coming tomorrow! and there are some differences in the UK.

Gary - you do sound pretty lucky as I would have loved that. We didn't see them til the 90's and it was amazing while they lasted.