I realized recently that I haven't spent much time talking about D&D/Pathfinder. This is a little strange because that's both where I started in RPGs and the one I am playing and running more than any other right now. Some of that is because I gave up trying to post session recaps of the campaign I am running and I decided not to talk too much about the campaign I am playing. That seems like a huge miss for my own blog. I'm still not sure I'm going to say much about the Kingmaker campaign and I'm not sure how soon the recapping will re-start, but I can at least talk about where things stand in the Worldwound. 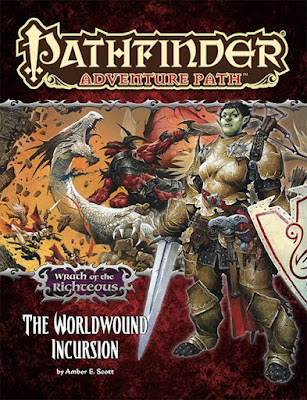 Wrath of the Righteous just finished session #35. I would say we are about halfway done with book 3 out of 6 - it's a Pathfinder Adventure Path and that's how they come. We started in late 2013 and have had numerous interruptions that make our original plan for twice a month work out to more like once a month on average. Considering I stopped recapping with session #6 I have a lot of write-ups in the backlog. I know some people like reading them and I do like having a record of the game available on line so I will see what I can do about attacking that. In the meantime I can talk about the game system in general and this AP in particular. 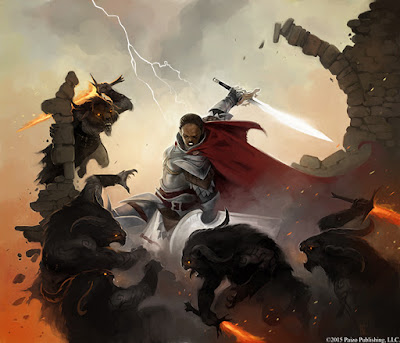 The party is up to 9th level and 3rd tier Mythic. Most of the published adventure paths peter out about level 15 but Wrath of the Righteous was designed and sold as the "Maximum" campaign - characters will hit 20th level and 10th tier Mythic before the end. This is Pathfinder set on 11 and I am already feeling the effects. "Normal" Pathfinder starts to get crazy in the teens according to what other people have reported. Mythic lets people break the standard assumptions of Pathfinder in many ways and 3rd tier is where this really starts to show.  In fact, this book is where a lot of WOTR campaigns break and are ended by frustrated DM's, at least according to what I am seeing on the Paizo boards and in other places. I'm determined not to let that happen but I can certainly see why. 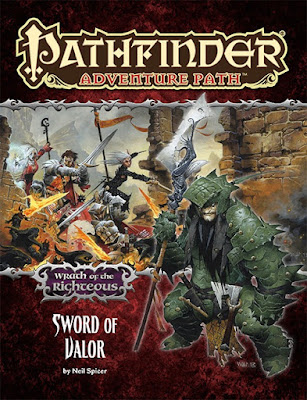 A big chunk of this adventure is wilderness exploration. Anyone who's run that kind of game in 3E, 4E, or PF knows what that means: novas. A lot of wilderness exploration ends up running about one encounter per day, and one encounter per day means a player can unleash his character's most powerful abilities without the controlling factor of "but I might need them later", and Mythic power only exacerbates this problem. With a Mythic boost the ranger can fire off a ridiculous number of arrows in one round, the wizard can recall and recast almost any spell when needed, and the cleric is extremely unlikely to run out of healing. Going through a smaller-scale encounter area like a dungeon or hostile city puts at least some consideration for what might be next in their heads. Losing that removes most of the constraints so that foes of what would be an appropriate level in a normal PF game melt in a round or less. One guideline I've seen is that a CR equivalent to level + mythic tier makes for a better encounter but I'm not sure about that either. 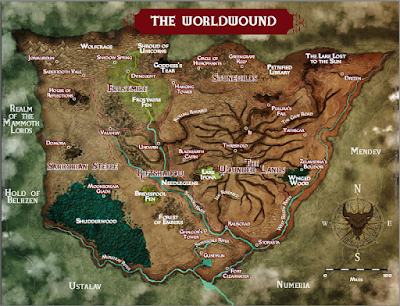 I made this problem worse on my own by allowing each of my three players to run two characters. In general I trust them to do this right and the reasoning was that 3 characters was pretty limiting, especially if someone didn't show up. The base assumption for Pathfinder adventures is that they are aimed at a party of four. For a long time I only had 2 players so dual characters was a necessity but then when my third became a regular attendee it was a little awkward to keep him at 1 pc while the others had 2. By itself I could easily manage a larger party but adding the complications of Mythic characters on top of the 50% larger party  ... it's tricky. Max enemy hit points is an easy bump. Adding more foes to each encounter does help but it also increases the complexity of the fight and that has some problems of its own. Adding Mythic levels to the opposition does make a difference but everything can't be Mythic, nor should it be. Even with Mythic, I'm pretty sure my party could take on the most powerful villains in the current book right now, several levels below where they are supposed to be.

The other issue that does reduce the fun to some degree (which makes it a significant problem) is combat. At low levels PF combat was fast - especially compared to 4th edition which was our previous game. Five rounds was a long combat and even then it only took a few minutes to slice through it most of the time. As the levels go up though, characters have more and more options. Mythic increases those options. On top of that my players have two characters each to run so it's difficult to determine your plan and stick to it through a fight as you have to split your focus during each round. This also means they are not as good at knowing what their character can and should do in any given situation because there are so many options floating out there.  This means combat can take a long time sometimes. Not because it's grindy and there are more hit points to chew through, but because there are so many different ways they could go in a fight. A fight might still only last five rounds, but those five rounds might take us an hour now, instead of the ten minutes they took at level 3. We are easily back up to the same rough time as a 4E combat or a Champions combat so "speed of play" is not really the solid feature that it was early on. 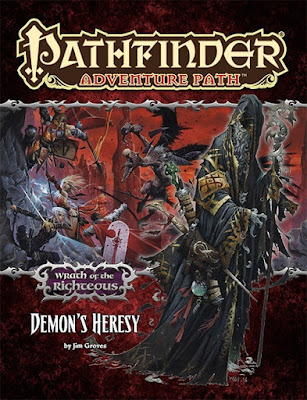 I knew from the beginning that it would happen at some point and we are now at that transition: I am effectively running a superhero game. They don't really fly yet but they can make full moves and do full attacks and that's before they are blessed, stoneskinned, and hasted and those are the lower-level powers at their disposal.  Sudden Block is one of those irritating powers that the paladin uses regularly: I manage to score a hit, he uses sudden block, which means I need to re-roll at a penalty, take the lower of the two, then if I miss he gets to make an attack of his own in response on my bad guys turn! Oh - and he can do this to protect someone else to! This kind of option was common in 4E but it was less painful because everybody had interesting moves or tricks in that game - in PF that is not the case. That's just one example.  So while we're not quite halfway through the game is already shifting from a typical D&D style game. I'm not sure how I'm going to manage it but I am going to try. I don't want to cut them back down to one character each because that changes the dynamic of the party considerably. I don't want to just remove Mythic as that dramatically changes each character and I'd like to see just how ridiculous it can get. If you're a fellow DM looking for a "how?", well, I don't know yet. I've run plenty of superhero games before, just not with this set of rules. If I can make the shift in mindset then I think the mechanics will follow. 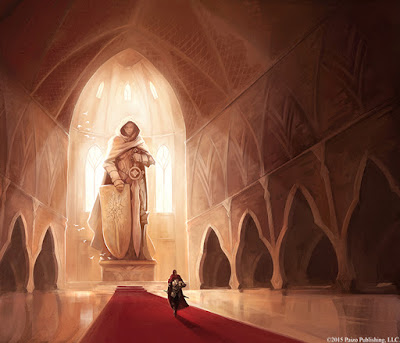 So what would I do if I was starting the AP over again? As much as I like the idea, I would probably skip Mythic Power for the PC's and use the Hero Point system from the Advanced Player's Guide. I think it gives players enough extra oomph to feel extra heroic without breaking the game the way Mythic does. I think that version of the campaign would still be a step up to "Mighty" without going all the way to "Deity". 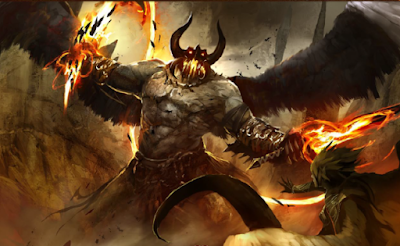 That's where the campaign stands right now. There are definitely challenges but they are largely system challenges. My players are having a good time, I am having a good time, the story/plot/setting/background of the campaign are epic and cool and exactly what my guys have wanted to do for a long time. If I can figure out the mechanics to a satisfying degree then this will be a campaign they will remember for a long time.