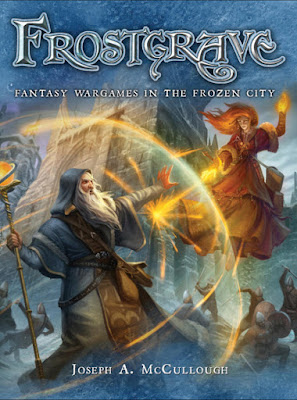 It's been a miniatures-intensive few weeks here as I've been bitten by the bug again and picked up a few new games. Besides Kings of War our other fantasy game is Frostgrave.

The concept here is that there was a mighty fantasy city that was a center of learning and magical knowledge. One day something happened and the entire city and surrounding area was covered in ice. Now, a thousand years later, the ice is retreating and greedy desperate  intrepid wizards are coming to the ruin to steal loot rediscover ancient magical knowledge.

Now this sounds like a pretty solid start for a D&D campaign and it would be, but this is a skirmish miniatures campaign system. Each player starts with a wizard and 500 gold crowns. The gold is used to buy hirelings (typically starting with an apprentice wizard) such as knights, thugs, archers, all the way to guard dogs. This merry band of thieves explorers then faces off with other competing bands to recover loot. There are different scenarios but typically it's an objective based game (loot tokens) and success lets you level up your wizard, learn some new spells, hire more hirelings, pick up a magic item, and generally get better. Ultimately the goal is to get to level 20 and ascend to the next level of being but the main goal is to have fun skirmishing with friends. 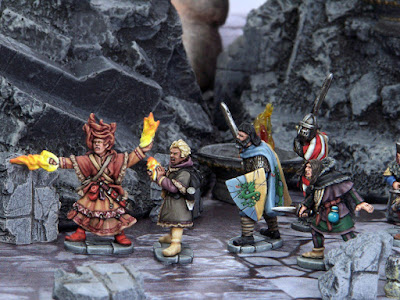 Now yes, this does sound a whole lot like Mordheim from GW a decade or two back which was itself a fantasy version of Necromunda from a decade or so before that and it's pretty clearly aimed at a similar type of game. Mechanically it uses a d20 for resolution instead of d6's but it is in very similar territory regardless of the exact mechanics.

The mechanics are pretty light - 4th edition D&D this is not - but it should keep games fairly short and it looks to me like there's still enough to it to make it worth playing. The main focus is on your wizard and there are ten different schools of magic each with multiple spells to choose from. A wizard starts with a variety of spells, not just one and not just in your chosen school so you can have multiple magical options. There are different types of weapons and armor and some magical items that can be purchased to gear up your band. It looks like enough to keep things interesting but I won't know for sure until we try a few games. 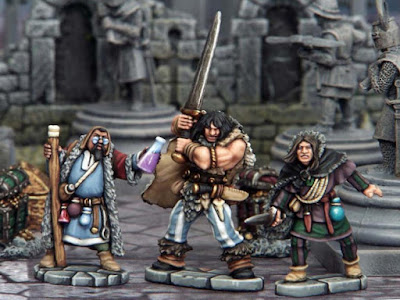 There are ten scenarios included in the game to keep things lively and a bestiary for use with some of those and for wandering monsters - nothing less convenient than having a bear or a couple of skeletons show up when you're trying to get away with the loot safely excavate priceless artifacts for the benefit of all mankind.

One upside is that if you've been playing D&D type games for a few years you probably don't need any new miniatures to play it - Lord knows I don't. So it's nice to have another game that uses things you already have. If anything, it's an excuse to paint up some of those individual fantasy figures that never seem to get played in the RPG campaigns.

These kinds of games blur the line between RPG and miniatures game more than most with their focus on campaigns, small groups of individual characters, and advancement. People get attached! As such I suppose it competes with an RPG game somewhat but it is still a different enough kind of game that hopefully there is room for both. In videogame terms it's "PvP" and not "PvE" but it's usually a pretty friendly form of PvP. Just to blur the lines a little more there is already a campaign book for a specific series of adventures against a lich in the city. There's also a book of fiction set in the city available as well. 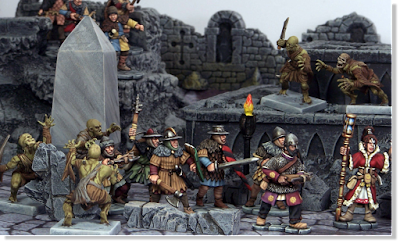 So - read it, liked it, read it again, sorted through a few mini's, and expect to play it in the near future. The game has a lot of cool little touches that I want to see in action. Moire here when I have a game or two finished.
Posted by Blacksteel at 7:49 PM