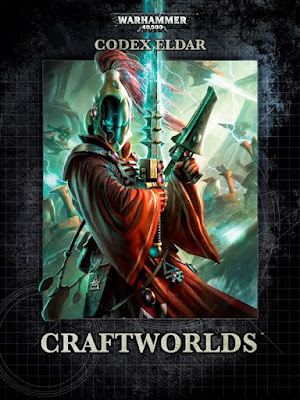 A year ago I was adding Eldar units and agonizing over how to paint them up. That never really went away as anytime I started looking at my options I vacillated on having a small Iyanden ally force alongside a scheme of my own devising or combining the whole thing into one. This (among other things) kept me from getting much done with it last year and then the new codex came out and confused things even more, so I worked on Chaos Marines instead.

By December I was looking at the Eldar again, re-reading the new codex, researching details online and it finally hit me: It was really a bad idea to have two Eldar forces of my own plus Apprentice Blaster's Eldar army all taking shape in the same house. Blaster decided to go Saim-Hann when he started his army a couple of years ago so he was going to need more jetbikes. I decided to go with Iyanden since I already had some painted units for it and I like the wraith part of the army a lot anyway. Going with known craftworlds gives us the option of picking up the occasional painted unit which is a handy thing when you own more than one army. 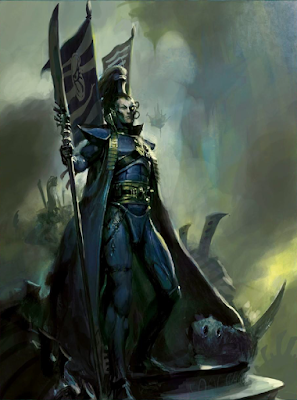 Army scheme settled, I went through my units, handed over several of them to Blaster to fill out his force, and decided to give him a boost by painting up one of the jetbike units.

He was pretty happy when he got a hold of them and started painting up a second squad in almost the same scheme.  We got a lot of painting done in the last two weeks and I think this helped jumpstart it for both of us.

Once he took over I focused on what would become the core of my (finally!) settled army: A wraith host formation! That's a Spiritseer, a wraithlord, a wraithknight, and 3 units of wraithguard/wraithblades. I already had all the units - I just needed to build and paint them.

I spent most of my time on the wraithguard as I had 15 of them and they were going to take the most time and effort. I also finished up the wraithlord as he had been partially built and painted some time ago. The spiritseer is "started" and the wraithknight is partially built but not painted as of this posting.

Build-wise I went with one unit of axes & shields, one with D-cannons, and one with D-scythes. I can see uses for each and I wanted to give myself all of the options instead of doubling up on one choice.  The wraithlord has dual scatter lasers as I am not running jetbikes and I haven't built my war walkers yet.

The current plan for the rest of the army is an aspect host featuring 3 units of dark reapers, a CAD with Farseers, rangers, and dire avengers, and two units of swooping hawks in there somewhere too. A falcon carrying fire dragons is an (already painted) option. I also plan to add in 3 Vypers and the aforementioned war walkers. Dark Eldar allies with an Archon leading a raider-borne squad of warriors are likely to make regular appearances too. 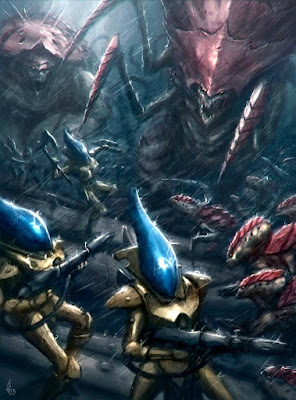 The basic theory is that the d-scythes deep strike via allied Dark Eldar Archon with webway portal, the D-cannons travel in a wave serpent and the axes march up the field with the wraithlord. The wraithknight takes the center of the field and destroys whatever needs destroying first. The reapers and rangers form a sort of gunline aided by the farseers while the swoops pounce on vehicles/flyers. Vypers/walkers provide mobile, if fragile, fire support.

The army does lack hand to hand units so I plan to build the wraithknight with sword and shield. It's mobile, durable, effective, and it looks great!

I would also like some stronger anti-air but between the Reapers, the Swooping Hawks, and a multitude of scatter lasers I am hoping that I have enough for now.

So that's the new approach. Once the wraith units are done the Reapers and the Swooping Hawks are next on the painting table. I expect the whole force will take a little while but I don't think it should take the whole year. I'm aiming for a month or two and then we will see what's left. Down the road I will probably add enough guardians to build that formation as well but it's not a high priority for now.

The last thing I needed to really bring it together was a theme - well, a theme beyond "lots of wraith units". Then I started thinking that we have a technologically advanced race whose homeworlds were destroyed in a catastrophe fleeing in an enormous spaceship and gritting their teeth at every casualty but refusing to surrender to the enemy or give up to the cruel fate of the universe... I believe Farseer Adama will be making an appearance on the tabletop.


So the plan is to focus on these guys exclusively for now, both painting them (to get them done) and playing them (to get good at it). That will likely mean some Eldar-on-Eldar conflicts as Blaster is all over his force too. Red's Necrons should give us a change of pace now and then and a few months down the road I am sure I will be ready to throw one of my marine forces out on the table too. For now though, it's all about the Eldar.
Posted by Blacksteel at 12:00 PM