Starting the New Month off with a Look to the Future

I am still shocked by this whenever I think about it. Rifts is coming to Savage Worlds. A setting I've liked for 25 years is being converted to  a system I've liked for 114 or so -  ever since they first started discussing it in the wind-down of the original Deadlands. I can't think of a system that will make it more playable. SW is is lightning-quick compared to the massive-hit-point-beat-down of the original system. It's something I thought we would never see - an official, licensed, and approved conversion to another game. Palladium has been notably aggressive in preventing even fan conversions of Rifts to other game systems - now they're going to do it themselves. It's a tremendous about-face. 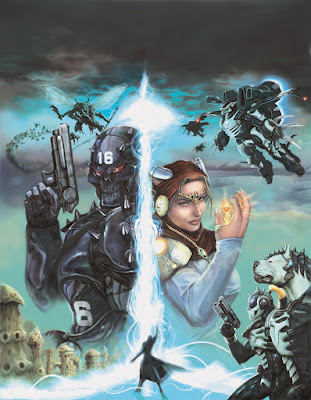 I'm not terribly interested in speculating on the "why" because in the end it doesn't really matter. It really appears to be happening, and there are good people involved all the way around. 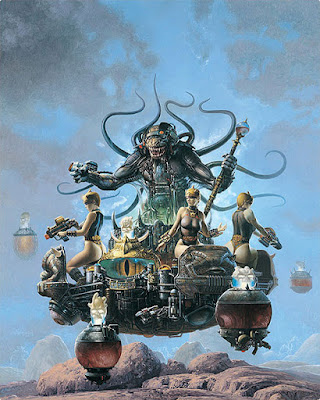 I have to say that when the day comes that we can roll a wild die for our Juicers, Crazys, Dog Boys, Dragon Hatchlings, and yes, even the Glitter Boys, I will be picking that book up and trying to put together a session the very next chance I get.

This could actually get me to play Savage Worlds (a game I own and have no real bias against except it never seems to make it into the "oh, let's do this" pile)

Here's where we differ boys.

RIFTS Savage Worlds sounds like taking everything in my fridge, putting it in a blender set for puree, and adding every color of food coloring.

Dark slop? No, thank you. I'm not hungry.

What is it about RIFTS people like so much?

No BA what you describe is regular old Rifts. Rifts Ssvage Worlds is taking that and deep frying it to a crispy golden brown. Regardless of how you felt about the original dish, deep frying it can only make it better!

On a slightly more serious note I suppose I ought to write up s post about what I like about rifts.

I was never a fan of the rules, nor the setting.

I always felt like it was a mish-mash of everything and therefore had the feel of nothing in particular. Oh, except is was rough, and sort of extreme before there was extreme.

It also felt like since I hadn't read the 100+ splatbooks that the GM, and other players had, I was at a significant disadvantage. A feeling I also get whenever I try playing Pathfinder.

I look forward to you doing a post on why you like RIFTS. Maybe I am missing something.

One hint with Rifts is focus. It's not the 100 books all at once, it's picking out the one or two that strike a chord with you and building a campaign with those.