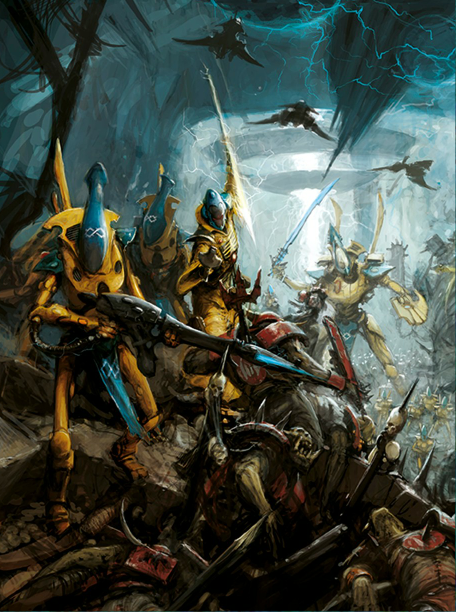 With some time off I've been digging through the 40K stuff. I needed to, as in a recent rearranging of the game room and the garage a lot of things were "temporarily" tossed into boxes and drawers to get the larger task accomplished.

After finding a home for ... almost everything ... I started looking over my Eldar. A year ago I was all fired up to build a wraith-heavy force using the Iyanden supplement. Then earlier this year I mentioned I was thinking that it would be smarter to instead just build out my existing instead of building two Eldar armies. More recently, given the number of 40K armies I have* vs. the number of times we play in a year I was thinking about dropping them entirely and focusing down to marines, orks, and chaos. I've worked out an answer I can live with this week so I thought I would share.

My old "alien" Eldar are going back in the box for now, The newer stuff will be painted up as an Iyanden force of 1000-1500 points using what I already have with dual themes of "wraith units as core" and "no guardians". This is the list as of right now: 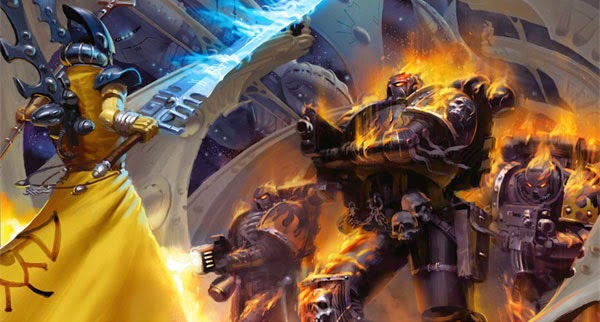 Dropping the Harlequins takes me down to around 1000; Adding a wraithknight or another guard/seer combo squad takes me towards 1750/1850. Keeping it to one CAD makes it easy to ally them in with another force. I know this is not a tournament army but that's not really a consideration here. I will probably look at some wave serpents down the road to add some mobility.

Another upside is that around half of this force is already painted, leaving me fewer than 20 figures to paint to call it "done." Going with a common Eldar paint scheme makes it easy to pick up a painted unit if I see something interesting, avoiding an increase in the backlog.

The general approach is that the Reapers sit somewhere and shoot at range, the Fire Dragons jump in the Falcon and travel where needed, while the seers join the Wraithguard units and march across the table with the Wraithlord and Harlies. It's not a fast army but they are fairly tough. Performance will determine future expansion.

Anyway, that's the latest on the Eldar. I've been working on the Dark Angels and the Chaos Marines so I'll have more to share on those down the road.


*I have ten armies right now of say 1500 or more points. Some of you are saying "wow", some of you are saying "that's all?" but regardless of where that sits on your personal scale they take up a fair amount of space (especially if you want them out where you can see them) and if I'm only playing twice a month, that not even 3 games a year with each army. You're never really going to get to know your army if you play 3 games a year with it, so my thinking has been to focus in on fewer armies and using them in more games.
Posted by Blacksteel at 12:00 PM