... or "How I developed a personal relationship with Lion El'Jonson" 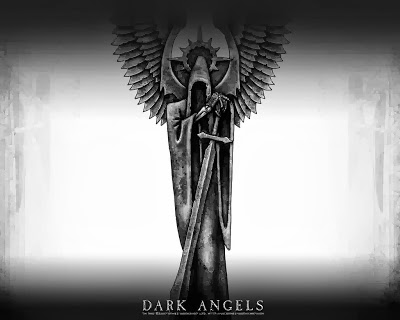 I never had any interest in the Dark Angels in the early editions of the game. They didn't stand out to me over any other chapter and I was already making my Griffons and later my Crimson Fists. Then when the robed stuff started coming out it just did not appeal to me at all - I liked my power armor visible and shiny. I had the "Deathwing" short story collection and while I liked the main story, the idea of mixing Native American stuff in with power armor made no sense to me at all. A friend of mine chose them for his marine army and while I liked some of the "winged helmet" look the rest of the scheme did nothing for me.

During 5th edition I became aware of the possibilities of the all-terminator army and the Dark Angels were the main way to do it. I picked one up, though they were not painted as Dark Angel Deathwing terminators. I still wasn't a huge fan of their look so I actually wanted some other color scheme.

Something happened there though. To run the army I had acquired the codex and the lore started to draw me in. I liked the Deathwing already, and the Ravenwing was growing on me as I began to see the possibilities of a biker army. I also started to like the robed look as they took on a more knight-like aspect in my head. Think "Jedi" and you might begin to understand. That said I still wasn't huge on the feathered thing but I was weakening.


I really disliked the green color too - when I see a green military unit I want to pain camo on it and that doesn't work well with all the robes and hoods and feathers that are part of DA figures. As much as I was starting to like them, there was no way I was going to paint up plain green marines. That Ravenwing paint scheme though ... that was nice.


Doing a little more digging, part of it in my own materials, made me realize that the old Rogue trader Dark angels didn't use the green paint - they were black, with some red details. I can work with that.

Plus it fits pretty well with the Ravenwing "official colors:


So I decided on using the Pre-Heresy/Ravenwing scheme and suddenly this got a lot more interesting. Black and White marines - who else will have that cool of a combination! 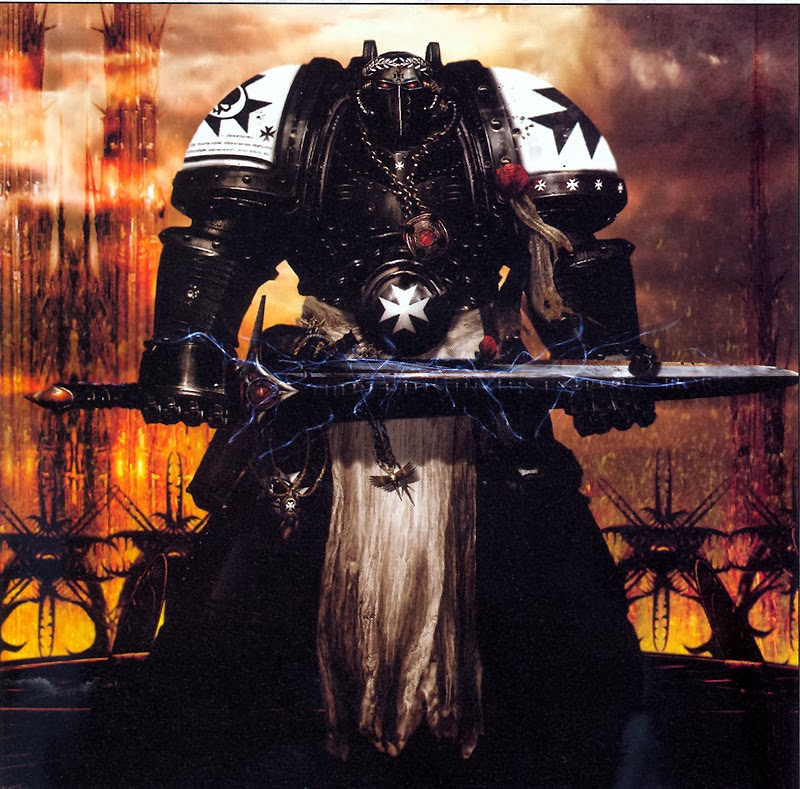 Ah ... yeah ... those guys. Well that's fine - I've liked the Black Templars since they showed up in the Armageddon codex back in 3rd edition. They will be an additional source of inspiration. Look, the only other set of robed marines in the game has exactly the color scheme I have ended up liking. Maybe I should have gone with them but I like the other aspects of the DA's too so I'm comfortable with my choice.

As I was working through all of the above the Dark Vengeance starter set for 6th edition came out and pretty much sealed the deal. Leaders, tactical marines, and a bike squad? That's a solid start! I picked up that plus extras plus I gathered some spare parts that seemed to fit. After a year of putting things together I had a nice pile of parts and a solid paint scheme, but no playable army. Part 2 will cover that side of things.
Posted by Blacksteel at 4:01 PM