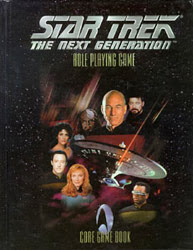 I used to own this book, in fact I bought it the month it came out back in 1998. My main impression was visual - this was the first full-color, full-of-photos RPG book that I had seen and it blew me away when I flipped through it in the store. Plus, it was Trek! We hadn't had an in-print Star Trek game in about 10 years when the FASA RPG petered out with the Next Generation Officer's Guide. Now there was a new Trek game, from a company I'd never heard of, using a system I had never seen before - and it looked amazing! 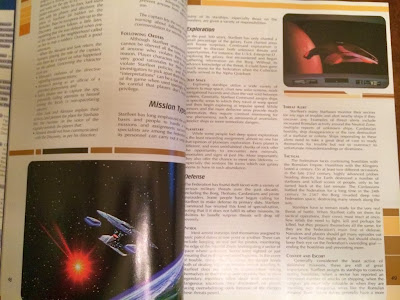 To continue with the visuals I had a lot of experience with FASA products, from Trek and Traveller in the early days on into Battletech and Shadowrun where they entered their "art is everything" phase, and even they did not publish full-color rulebooks. Even their Trek game was not overstuffed with photos - the main rulebook was, but the supporting material mostly used line art. TSR had gone sort-of full color with the 1995 AD&D 2E revisions (the black cover PHB-DMG-MM) but even then it was mostly black text on white pages with some red headers and some art here and there. This new Trek book was way past that, with full color photos from the show all over the place and LCARS borders in different colors. The closest comparison I can make is with Underground and it's use of color to mark different sections and full color art throughout the main rulebook, but even it didn't have photos to draw on like this. LUG's Trek stood above all others in look and presentation.

The next impression was (not coincidentally) the price - it was $35! This was by far the most I had ever paid for a single rulebook and it was a shock, but the presentation - and the subject matter of course - won me over and I picked it up as soon as I could. Remember the D&D 3E books that came out in 2000 were $19.95 full-color hardbacks, and later jumped up but only to $30. This was a couple of years before that. Even sticker shock and general stinginess can be overcome with the right content and presentation. 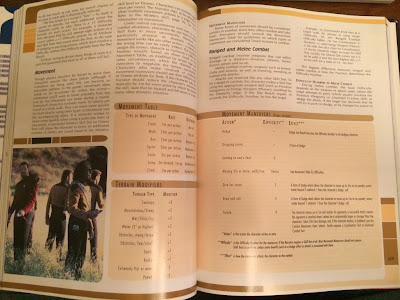 Mechanics-wise I was somewhat disappointed. My standard of comparison was FASA's Trek game and it was a percentile roll game with a large skill list, an action point personal combat system, a fairly detailed ship combat system, a Traveller-esque character generation system, and in general a lot of simulationist crunch, to use the popular phrasing. I played it for years and I loved it. LUG's Trek worked on a 1-5 scale for stats & skills which seemed incredibly narrow and limiting at the time. It also had a much shorter skill list which also seemed limiting. On the plus side it did keep a sort of lifepath/background generation system and it added in Hero/GURPS style advantages and disadvantages which could add some flavor to a character beyond their stats, skills, and service record.

I also was not impressed with the die mechanics. That 1-5 stat is how many dice you roll for a skill check, then you take the highest die and add it to your skill rating (also 1-5) and that's your total. So the entire range of possibilities is defined by a d6+5. That certainly makes every point count but that is a huge amount of variability. One die in the pool is the drama die and on a 6 you get to add another die to the total, on a 1 there are increased consequences for failure. The recommended difficulty numbers are 4 (Routine) - 7 (Moderate) -10 (Challenging) - 13 (Difficult). Those seemed really high considering you're going to average around a 4 + skill level).

I was disappointed enough with the whole thing that I only tried to run it a few times and only played it a few times before the book hit the shelf. So much potential wasted. I eventually sold it or traded it for something else. 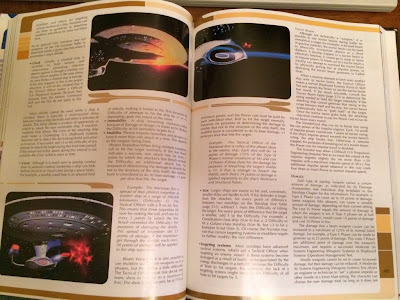 Recently though I've been digging into Trek after a long phase of not really caring so much. I stll have my FASA Trek stuff and a complete set of the later Decipher Trek RPG but I wanted to take a second look at LUG.  I picked up a copy of the book again (less sticker shock this time) and at first glance it's still very pretty.

Rules-wise I like it better than I did then, probably because I've played a lot more rules-light games and get this idea more now than I did then. It definitely leans towards the rules-light end of the spectrum, though it gets oddly detailed in some areas like starships, which ironically enough now seem almost too detailed to me in relation to the rest of the game system.

The game also is clearly and proudly in the narrative structure camp of gaming. Adventures are built around scenes and acts and there are really no random encounters and that kind of thing found in the book. That's fine, I can work with that when I know it up front. There are still some elements of a "Trek Universe Simulator" there but it's mostly a "Trek Series Simulator" rather than a physics engine like the FASA game was. 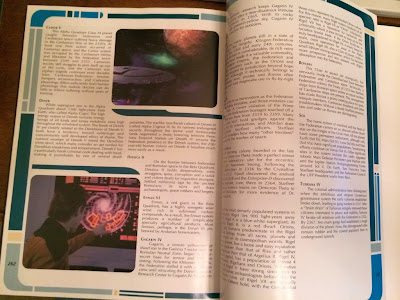 I am still not sure about the main resolution mechanic - relying on a handful of d6's still seems very swingy. I play enough 40K to know how unpredictable a few of them can be (saving throws for a terminator squad come to mind). I think to make this game work I would have to be very very strict about limiting tests to "only when there is truly a chance of failure" which is something I am not always good at doing. It would also need to follow the narrative convention of "one stealth check gets you from the shuttlecraft landing site to the hidden klingon base" rather than the more traditional "one stealth check per 100 feet" approach used in most of the games I have played. I'd be willing to give it a try, but it's definitely something I would have to watch.

So, yes - I like the game better now than I did and I might be up for giving it a try sometime. Only one of the Apprentices is really interested in Star Trek so I'd have to talk one of my other friends into it and that's going to be a tough sell. It's definitely going on the list as a secondary/try-out game though.

LUG Trek was one of my favorite games of all time, although Decipher Trek grew on me as it was very d20-esque. Like you, I bought it right when it came out. Good stuff with a lot of great "fluff" that you could use in another Star Trek game like Decipher Trek. The various LUG Narrator's Toolkits and S John Ross's Andorian sourcebook stood out as the best the product line had to offer.

Last Unicorn Games' Star Trek RPG remains my favorite system for running Star Trek and is in my top 10 favorite RPGs of all time.

I personally love the die mechanic, although I have a copy of the early playtest rules and I sometimes forget and use the variant mechanic they initially designed instead of the published one.

Instead of adding a second die if the drama die rolls 6, the 6 explodes as in West End Games Star Wars. If you get another 6 you keep rolling, etc

I very much dislike the Decipher version for the same reason Joe Bardales likes it. Too D20/D&D-ish. It feels wrong to me, like they forced the LUG version into a D20 mold it didn't quite fit into.

Oh look! These names of the play testers in the beginning of the book.

Yes I know you're a bit partisan on this one but I won't hold that against the game. I like that exploding die mechanic too, it seems a little cleaner.

I should also mention that the supporting material, even just within this core book, is very thorough.

My favorite other book in the line, the one I kept when I dropped the rest, was the Price of Freedom, which I think is a very handy reference for Starfleet in the TNG era. Pretty comprehensive ship stats and character info too.