Updates on the Big Two

Not a lot of playing time this week but I did have time to watch the videos from Paizo and WOTC talking about the year ahead for Pathfinder and D&D. They're interesting so I thought I would share. 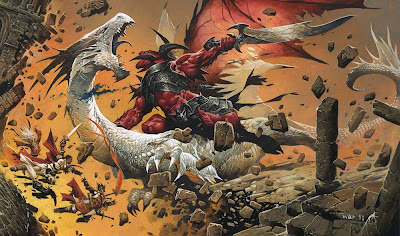 First up is Paizo here. It's about an hour long.

I like a lot of what I'm hearing with this and those adventure paths sound pretty cool. They have a demon invasion path, an Egyptian desert mummy-themed path, and a barrier-peaks-homage-of-some-kind path. Clearly I am going to have to get to know the campaign world and take a look at these.

I'm going to have to look into the miniatures too.I haven't been looking at the Pathfinder mini's line and it's probably time to do so.

They come across as a solid team who know what they are doing. I am more interested in playing the game because I like the people running the company and I like how they are handling it. Maybe there is a sweet spot for an RPG company where they are big enough to handle their business but not so big that they go corporate and things start to get drowned out by the bland.

Then we have WOTC here, and it's only about 20 minutes.

It's also pretty underwhelming. There's about 5 minutes of RPG discussion then we get mobile/video/computer games talk, neverwinter MMO talk and videos, lego talk, and then the Sundering video. I know Next is still in development but could we talk about the Sundering adventures for a bit, at least? The "Kre-O" stuff is a trinket, a toy that has nothing to do with the actual game and it gets as much time as the game does! At Gen Con could we not focus on the tabletop game and leave the details on the electronic stuff for PAX?

Watching these two in sequence just highlights the contrast in approaches: Pathfinder MMO gets about 30 seconds out of an hour long discussion. Neverwinter and the rest get roughly a quarter of a 30 minute presentation. I've been digging into Next quite a bit recently but stuff like this is disappointing, and then the PF stuff looks many times more interesting on top of that.

No wonder Paizo is on top.
Posted by Blacksteel at 1:35 PM

I imagine that Wizards are under a different kind of pressure as their masters at Hasbro force them to present D&D as an intellectual property for exploitation across all sorts of media, while Paizo are a games company with no obligations to a higher authority.

Even so, whatever the reality, only one of them seems to come across in public as having a love for their product.