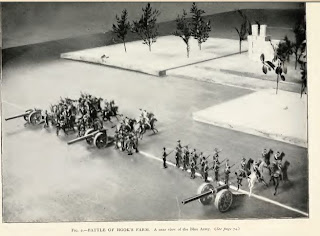 The first published set of miniatures rules was released in 1913: 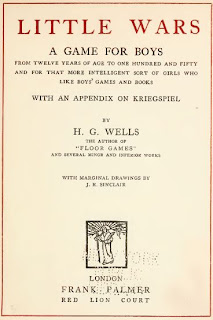 "Little Wars" was written by H.G. Wells and published 100 years ago this year. Now military people were running wargames on tables prior to this and for all we know there were gamers in basements doing this kind of thing prior to this as well but this is the first known occurrence where someone came up with the idea for a miniatures game, tested them out with friends, and published them commercially.

After some mention of previous fun with toy soldiers, It begins with a very open narrative of how the whole thing began with the notice of a spring-loaded gun:


Look - trash-talking among gamers one hundred years ago!

He fired that day a shot that still echoes round the world. An affair - let us parallel the Cannonade of Valmy and call it the Cannonade of Sandgate - occurred, a shooting between opposed ranks of soldiers, a shooting not very different in spirit - but how different in results! - from the prehistoric warfare of catapult and garter. " But suppose," said his antagonists, "suppose some-how one could move the men !" and therewith opened a new world of belligerence.

I think I would have gotten along with these guys just fine.

This is part of twenty pages or so that describe the development of the game and the experiences that shaped the rules - "we tried this and then discovered it was a problem in this way and so changed it to this new method" - more notes like this today would be a welcome development, even in this age of designer blogs.

As far as the rules, they are fairly abstract but oddly modern in the conscious choice of speed-of-play over detailed realism. In only 12 pages they cover all kinds of shooting, melee, taking prisoners, and area-effect weapons. They do not use dice - shooting is resolved by using small spring-loaded cannons, and melee begins with alternating removal of men and goes thru several iterations over the course of the book. For this kind of game they look pretty solid.

The next chapter is a battle report - with maps, illustrations, and photographs! From 1913! It's amazing how some things have remained unchanged. "The Battle of Hook's Farm" actually takes up more space than the rules themselves and is an great way to see the rules in action.

There are some optional rules in the next chapter - trains, hidden units, and some general suggestions to try. Then we have some commentary on little wars vs. big wars, then finally some notes on integrating these rules with a Kriegspiel, the more abstract type of game developed in the Austrian military that had become used by most of the European militaries of the time.

If you're wondering how this kind of thing ties in with the roots of role-playing, read this excerpt from the beginning of the battle report:

And now, having given all the exact science of our war game, having told something of the development of this warfare,let me here set out the particulars of an exemplary game. And suddenly your author changes. He changes into what perhaps he might have been — under different circumstances. His inky ringers become large, manly hands, his drooping scholastic back stiffens, his elbows go out, his etiolated complexion corrugates and darkens, his moustaches increase and grow and spread, and curl up horribly ; a large,red scar, a sabre cut, grows lurid over one eye. He expands — all over he expands. He clears his throat startlingly, lugs at the still growing ends of his moustache, and says, with just a faint and fading doubt in his voice as to whether he can do it,  "Yas, Sir! "Now for a while you listen to General H. G. W., of the Blue Army. You hear tales of victory. The photographs of the battlefields are by a woman war-correspondent, A. C. W., a daring ornament of her sex. I vanish. I vanish, but I will return. Here, then, is the story of the battle of Hook's Farm.

If you're reading this I bet you understand exactly what he means here.

If you have any interest in the roots of miniature gaming, and RPG'ing too, or if you are interested in H.G. Wells, it's definitely worth a read. My copy is all of 82 pages and contains all of the illustrations and photos from the original which are a lot of fun to see given the time that has passed. The open library copy is here so you don't even have to go buy it. The PDF is particularly nice with the illustrations done in red and the pictures as shown above.
Posted by Blacksteel at 12:00 PM

My first exposure to wargaming was finding a copy of Little Wars in my junior high library when I was 13.

That's cool! I'm curious - what did you do with it?