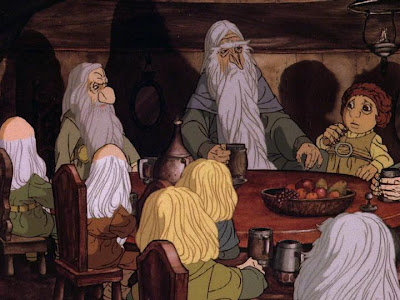 Beyond Sinbad movies, Robin Hood & Three Musketeers movies, Greek and Norse myths, and various fairy tales, the animated Hobbit is what got me really fired up about fantasy in general. After I saw it, and found out there was a longer sequel in the works, I sought out the books (all 4 of them) and acquired them thanks to an encouraging aunt of mine and that was pretty much what started the whole thing. It was the spark that lit the smoldering mass into a full-on flame. For years afterwards I read the whole thing over again every year. Within a few more years I had discovered D&D, then later Conan and Fafhrd and the Mouser and Sanctuary and a whole bunch of other books and games and all those same bad movies we all watched back then. It also led to Warhammer and that whole miniatures addiction thing that takes up an interesting amount of space around the house to this day. A few years ago I discovered it all over again when I started reading it to my kids as a bedtime story, one chapter per night. 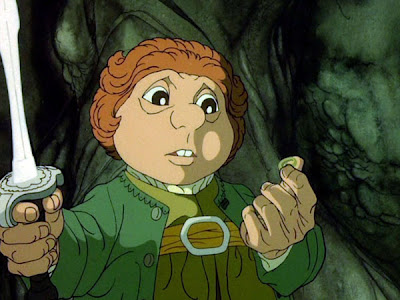 What makes it so good? Enough has been written that I'll keep it short: For me it starts with a low key hero (no special bloodline, prophecy, power, or skill) who is dragged into an adventure where it seems like everyone else knows more about what's going on than he does, which is not a bad metaphor for several stages of life in my experience. Once in this situation, while he doesn't seek danger he doesn't automatically run from it either. Instead he deals with it as it comes, to the best of his abilities, and in the end he makes it through with some new friends and some good stories to tell - who doesn't want that? 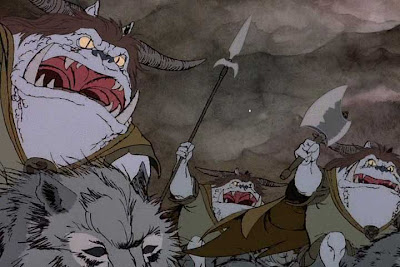 As far as movies go, while I'm sure some hate it, the animated version all over this post pretty much defined the look of a lot of fantasy creatures for me. From Gandalf, to the dwarves, to those goblins (!) and Smaug, I still find myself picturing things in this style from time to time even now. It's very distinct and one that's never left my head or been totally overwritten. I had the animated movie eventually but before that I had the book & cassette and saw the filmstrip - remember those, kids?- in school more than once. So it was around a lot. 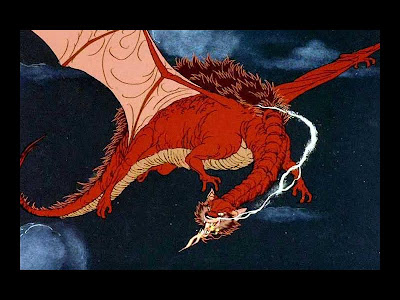 I'm sure the new movie will be good, and it will be a nice way to introduce people to the book with a modern look. I loved the LOTR movies and trust Peter Jackson to handle it well. I am concerned about the decision to make it into 3 movies - even with the appendices and all I think that may be stretching the material a bit thin. We'll just have to see. I am looking forward to the big release today. I probably will see it later in the weekend but I will be there, ready for the latest version of a story I have been following for a long long time.
Posted by Blacksteel at 2:35 PM

As you know, fantasy has never had the impact on me that science fiction has. One of the reasons was exposure.

The Hobbit animated film (which I do love by the way) was first broadcast on TV in November of 1977. I first played D&D in August of 77'. It was the first and perhaps only film of a fantasy nature I had seen at that point. Oh I'd watched some Erol Flynn movies and such but the Hobbit was something I saw and went, "Oh! That's what that game is talking about."

Imagine for a moment reading about Halflings in the Basic Rules and not knowing anything about what a Hobbit was.

This lone movie had a great deal of competition for my attention, interest and love. In May of that year I saw Star Wars. I had been watching reruns of Star Trek and Lost In Space and first run episodes of Space:1999 for a few years at that point.

Seeing it tomorrow evening most likely.

Let us know what you think.

See I was a Sci-Fi kid too - Star Trek (original and animated, various Saturday afternoon movies from Them to Forbidden Planet to Godzilla, Lost in Space and 1999 as you mentioned, Logan's Run, and then of course all the Superhero stuff too were all bigger players but I think that drove some of the fantasy interest - after Star Wars the spaceships and robots scene exploded and fantasy was kind of a less common thing.

I have a hard time figuring how I would have picture halflings if I had picked up D&D before the animated Hobbit - at least we have references for Dwarves and Elves (shoemakers, right?) outside of Tolkien.

Seeing it in a few hours here so more to come for sure.

You are the only other person I have talked to / read about who has seen the filmstrip version of the animated hobbit movie. I actually have the filmstrip. It is six canisters of filmstrips with six cassette tapes. I got it when the school I teach at was cleaning off shelves and getting rid of old technology. Any idea what it's worth?

I am not sure what it's worth. Poking around ebay I didn't see it specifically but there are some strips on there. The projectors are pretty cheap though - maybe you could get one of those and take some kids on a flashback to the old days.

Just listening to the cassettes is pretty cool and brings back memories. Some of the songs will definitely get stuck in your head for days.