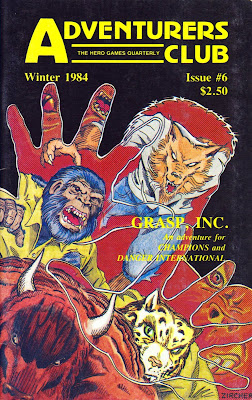 The big news is that the Champions 3rd Edition boxed set is selling well and, notably, there is a comment that Steve (presumably Petersen) has promised to never change the rules again, so "...this final revision of Champions is the best ever and as promised last issue the rules changes are in this issue along with the Champions III errata." It was very cool of them to include the updates in the magazine, and as far as edition changes go I'm not sure that Champions 1st-2nd-3rd would even be considered a real edition change today, but I think we know how this turned out. It would be 5 more years before we went to 4th Edition, so they did pretty well in the not changing it again department.


First big article: "Flawed Mirrors", an article on parallel earths by Scott Jamison. The author describes 5 different alternate earths where things have gone in a negative direction - Nazi's, communists, Big Brother, and just plain evil. I particularly liked the one based on a Red Dawn style partial conquest of the U.S. Wolverines! The author does use a handy format for these kinds of things: He gives the name, a short history of how things went differently from ours, the present situation, endangered heroes (star-spangled heroes are usually in this list), and help, such as an undergound or rebel movement. It's a solid article and does have some useful ideas even today.

The Crusader for this month is Captain USA: 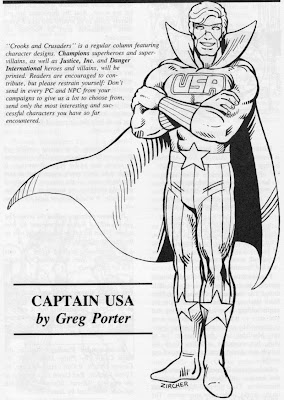 When I hear that name, this is what I usually think of: 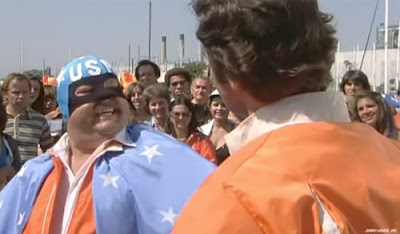 Either way, his stats are: 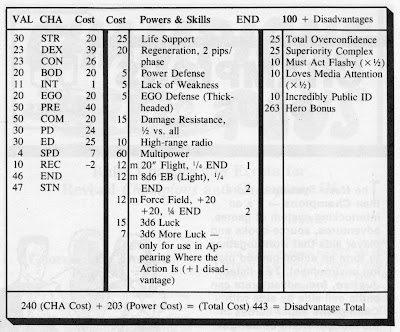 Mechanically I like him - to steal a football bit of wisdom Defense (and Luck) wins Championships. This guy has excellent, broad defenses, life support, luck, and flight. Plus he has enough offense to get by.

I also like the idea of the annoying glory-hog good-guy because it does force the players to deal with something that they can't just blast - it's a different kind of challenge than even the plot-device type of unbreakable object - you could beat him, it's just not a real option if you're a hero. This also makes for a pretty good test: Are you hero enough to work alongside Captain USA? Of course I suspect that post-Avengers any annoyingly monologging super, hero or villain, will get Hulk-punched right out of the scene, but hopefully that will die down in a year or so.

Champions Plus this month is the rules updates included in Champions 3E - it's basically Growth and Shrinking, that's it! There is also the errata for Champions III and there is quite a bit of it, including a complete replacement of the Variable Power Pool section. If someone was to go back and run an old school Champions game that included Champs III then this would be good information to have. 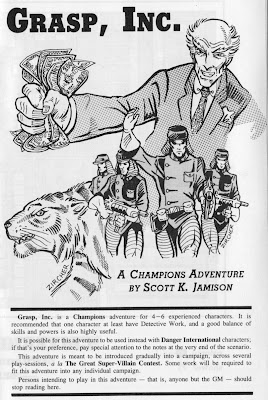 The big adventure this month is "Grasp, Inc." and it's not a one-shot - it's more of an arc to be worked in to an existing campaign. I like the idea but it's an oddly indirect conflict. The heroes stumble into an ongoing takeover/corporate war by being present when some mercenaries attack a company. This gives the PC's a chance to uncover the first layer of the organization.

Part two begins when a talking chimp knocks on their door, shares some information, and dies, which leads the team to a corporate base in Antarctica - I kid you not, and this is a comic-book game after all. I'd go total silver age on this one and make half the staff talking monkeys too, but that's just me. The base has a nice map and there is a chance that the PC's are completely fooled, but more likely bad behavior is uncovered (animal experimentation), a fight breaks out, and another layer of the organization is revealed.

Part 3 involves a sustained campaign against the heroes - DNPC's are victimized, known enemies are directed towards the heroes, and special weapons are developed and used against them to target known weaknesses. I can see this driving players crazy, so eventually it's time to move on.

Part 4 is a single big combat encounter against the leadership of Grasp itself which is somewhat anti-climactic - more of the mercs, two low-powered supers, and then a twist at the end that makes the heroes look bad. I would like the last fight of an arc to be memorable or notable in some way and this does not really do that. Considering the prominence of the frozen base I would write up some mutant animal supers and have them show up as the final opponents instead of the mercs. The adventure gives us one mutant tiger for this encounter but I think there should be more. Maybe cyber them up with some of those specialized anti-hero weapons from Part 3. I liked the rest of the adventure, this is the only part that I thought really called for "more". 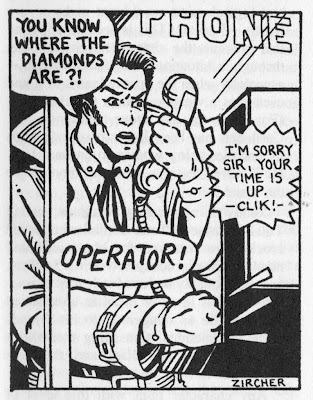