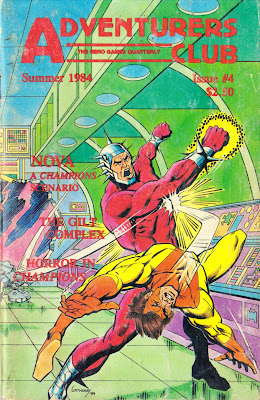 Adventurers Club #4 - That's a strong cover, very much in the style of the era's Champions and comic book cover art. The artist is Mike Witherby, who I don't remember being a big player in Champions art but maybe I will discover that to be wrong as we continue with the series. He also did the cover to #2 but I like this piece a lot more.

The editorials and news mention that this issue is late, they've been finishing up Justice Inc. and Champions III, and they are working on Fantasy Hero - and still looking for another name for it, having just wrapped up a contest for fan suggestions on a name. Also, Aaron Allston is taking over as editor, so it will be interesting to see where things go after this issue. They're also working on Primus and Demon, the GM screen, and Enemies III,


Other news includes the mention of the Superworld Companion, the release of Marvel Super Heroes, and the upcoming releases of Golden Heroes, Heroes Unlimited, and DC Heroes! You think we have a lot of Superhero games now? 1984 wasn't too bad either. Also: Maybe someone could have tried a name that didn't include "hero".

In the letters section, well, Foxbat was killed off in Champions III so there's a transition here, but no lack of trash talking him from before the news was out.

Look, I've discovered 4th-edition-style minions in a 1984 Champions product! This is the best evidence for functional time travel yet! I suspect if something like this came out in a company publication today it would be quite controversial. In the example one of the players has a character with a 100 Strength and he does a haymaker on Goldmind - and pushes it. With 32 dice rolled for one good punch you can imagine the carnage. This team is a set-up designed to teach out-of-control characters a lesson, but it seems way too heavy-handed to me. There's a discussion on how players should show restraint and appropriate levels of power and damage, but I have to wonder about the kind of campaign that would have to be running to where this is an appropriate development. If a PC has been beating on super-bads with a 100 Str for a while with no consequences, why should they suddenly be punished for max-punching yet another costumed criminal? I'm not completely opposed to this kind of thing, I just think there are better ways to handle it.

The big adventure this month is pictured on the cover and deals with a mysterious meteorite that falls to earth in Iceland. It's a pretty open scenario with some nice maps, some new stats for a few NPC's and a new organization. It's the best one since the first one and I think it would make for a good evening's play. Like all the best adventures it's easily modified and there is plenty of room for consequences for the future. One other note: If you're a DC fan it looks a lot like the DC Heroes adventure Fire and Ice. That one was published two years later but they do have similar themes. Some conversion work could lead to a nice campaign arc involving stuff from space crashing into arctic environments.

I not only remember The Armory, I owned it. It was pretty cool. Definitely one of those products I wish I still had (as best I can tell, my brother loaned it to a friend of his and never got it back).

Well that's good to know. I saw a copy of Espionage today at a used bookstore, I may have to go back for it. Then of course I will have to start looking for this.

Iam enjoying your reviews. I wish I had these magazines. This, for me, is when Champions was the best and a lot of fun even just to read. Now...lawyer-speak all day, all night...

I agree Matt - part of it is defining the areas of the game that had not yet been defined, but part of it is the attitude as well. I think there is still some of that thru 4th Edition, but an awful lot of it disappears by 5th.