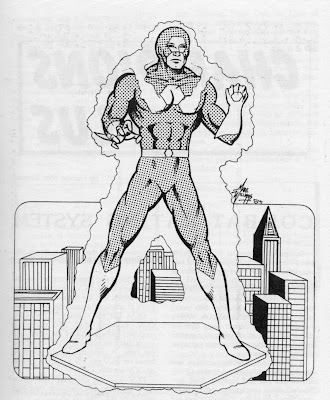 This is the Hexmaster M.A.D. Mk I from Adventurer's Club #3. I think he's supposed to be the Hero Games mascot from the early years. I don't think he's anything special to look at. In fact he looks kind of like the Nest Leader from Viper's Nest. 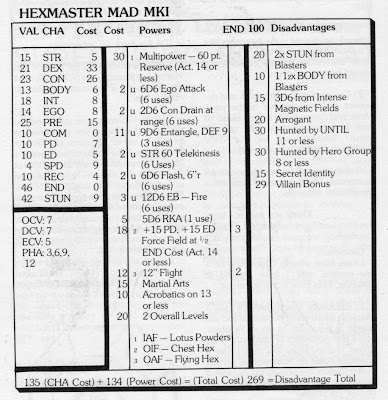 Even his stats aren't all that impressive - note that at full strength his Force Field won't stop an average roll from one of his own attack powers from stunning him on a halfway decent roll. Oh and yes, the hex on his chest gives him some of his powers and so does the one he is standing on.

What is interesting is the concept: M.A.D. stands for "Man Android Decoy". They are robots who don't know they are robots who are released into the world to carry out grand schemes to provide cover for what their creator is really planning. They monologue, recruit agents and supervillains, and generally carry on all of the classic master villain activities. Then when they are knocked unconscious or brought to zero body they explode! Knowing the background take a look at that statblock again - a wide variety of attacks, charges on everything, some odd weaknesses - he can blast away for a while and then BAM!

Of course with some gentle leading the players will probably assume it was a robotic decoy and the real villain somehow got away - which is partially true. Then he shows up again a few months or years later, they think "ah-ha we have him this time" and he explodes again - how does he keep doing that?

Then of course to double-fake them you spring the real villain on them, or maybe a non-robotic wannabe, who doesn't explode but who clearly has no firsthand knowledge of their earlier encounters - he read about them and was inspired. It's a work of such subversive genius that it deserves a home in every supers campaign, regardless of system!
Posted by Blacksteel at 12:00 PM